On Reddit, there seems to be a loud minority of people that will mock you if you even so much as mention the word “antisemitism.” More often than not, these people will repeatedly point out the fact that hating Israel is not anti-semitic. They will point this out in self-posts, submission titles and comments, even if nobody is claiming otherwise. It has become their go-to Straw Man; a ridiculous non-existent argument that they can take apart with ease.

Hilariously enough, many of these commentators are the same people who will:

So basically, many of those who lecture people on the importance of not conflating criticism of Israel with antisemitism are the same people that are proactively engaging in antisemitism… It’s kind of funny, right?

Anyway, let’s get down to the examples of antisemitism on Reddit:

r/WorldPolitics poster 9minutetruth-penalty posts a conspiratorial image macro, complete with pictures of Jews rubbing their hands. Apparently, the Charlie Hebdo attacks were orchestrated by “the joos”! Note how a post like this has nine upvotes (on a subreddit that considers itself “Anti-Zionist, but not Anti-Semitic…”) [Link] 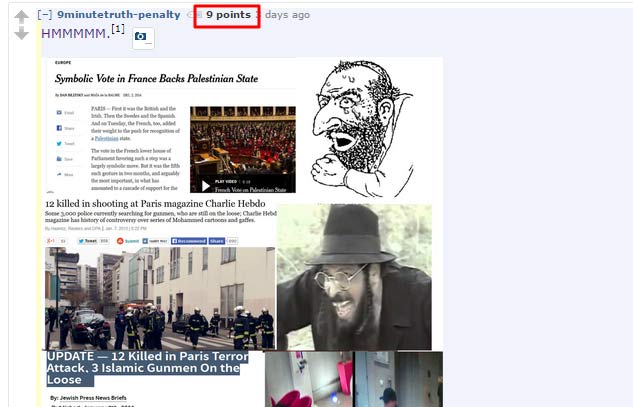 The same user is at it again. This time, he receives three upvotes.

That same user then asks “What’s next, false accusations of anti-semitism?”

OK, next up, we’re going to take a trip over to r/Conspiracy, which is a subreddit for edgy teenagers, paranoid schizophrenics and White Nationalists:

After three hours, the above post had 46 upvotes and it was sitting on the front page of r/Conspiracy! PS: Check out the comment section in that thread, as the OP (RedditRevisionist) is found out to be completely clueless. There were an estimated six million Jews living in Russia during that period, so it shouldn’t be a surprise to find out that the figure was mentioned. Also, terms such as “nine million Jews” and “three million Jews”, etc, were also mentioned (funnily enough, this didn’t make it into the image macro above…).

Holocaust Denial is also a favourite past-time on r/Conspiracy:

The above post is from the same user who posted this:

So… somebody who regularly posts Holocaust Denial articles is suggesting that anti-Semitism is a thing that Zionists create out of thin air. You can’t make this shit up!

Lets go back to r/WorldPolitics, where EnochX thinks that the Jews are downvoting him:

Once again, the comment is in positive figures (some downvote brigade that is, eh? Those Jews must be slacking.)

User 9minutetruth-penalty is at it again, with a bullet-point list about Jewish media control:

As you can see, antisemitism isn’t just a buzzword that is used to silence those who are critical of Israel. In many cases, it is an apt description of some of the bullcrap that gets posted to Reddit. If you check out the posting history of those who seem to be completely obsessed with Israel, you’ll find that many of them are prone to making off-the-cut remarks about Jews running the media and whatnot. More often than not, you’ll always find that one comment where they let their true feelings slip out. In other cases; it’s a lot more “in your face”, as you’ll find them visiting racist subreddits that were specifically setup for topics such as “white pride” and Holocaust Denial.