The other day, I decided to download ten years worth of Premier League data. The CSV files that I downloaded contained statistics for every game since the beginning of the 2003-2004 season. These files contained scores, corners, shots on target, fouls and a whole bunch of other interesting statistics.

One of the first statistics that I looked at was the betting odds. i.e. The odds that bookies were giving for each game. Using this data, I was able to generate a list of the five biggest Premier League upsets in the past ten years.

These are the games that prove that football isn’t played on paper. 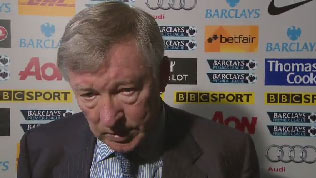 During the 2011-2012 season, Manchester United suffered a shock 3-2 defeat at home to Blackburn Rovers. It was New Years Eve and Manchester United’s manager Alex Ferguson was celebrating his 70th birthday. Before the game, the odds of Blackburn defeating Manchester United at Old Trafford stood at a ridiculous 25-1. Blackburn were at the bottom of the table at the time and a win for United would have seen them leap-frogging Manchester City into first place. Unfortunately for Ferguson, his birthday bash was put on hold when Blackburn’s Grant Hanley headed home what proved to be the winner in the 80th minute.

This was the biggest upset in the past ten years. A £20 bet on Blackburn to win would have led to returns of £520.

The odds of Hull City defeating Arsenal back in 2008-2009 were 16-1. Arsenal initially took the lead when a shot from Fabregas led to Paul McShane putting the ball into his own net. However, in the 62nd minute, Hull’s Geovanni tied the game with a 25 yard screamer. If that wasn’t bad enough for the Gunners, Daniel Cousin managed to put the visitors in front when he headed the ball into the net on the 64th minute. In a frantic effort to rescue a game that had been quickly turned on its head, Wenger switched to a 4-2-4 formation. This tactical change nearly worked when one of Van Persie’s shots went agonizingly wide on the 80th minute. In the last five minutes of the game, a header from Arsenal centre back William Gallas struck the crossbar, much to the despair of the home crowd. Despite all of Arsenal’s pressing, Hull did enough to see the game through, leaving the Emirates Stadium in a noticeable state of shock. 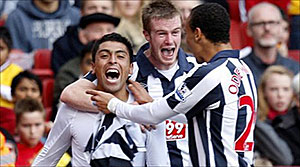 Newly-promoted West Brom pulled off an upset in the 2010-2011 season when they defeated Arsenal 3-2 at the Emirates Stadium. The odds of a West Brom win had been 14/1 before kickoff, despite the fact that both Fabregas and Walcott were missing through injury. Throughout the game, Arsenal were sloppy and incredibly error-prone. This was in contrast to West Brom, who played with a sense of confidence and purpose. After the game, Wenger admitted “It was a poor performance. Defensively and offensively. None of the players performed to their level.” 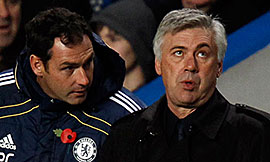 In the 2010-2011 season, Chelsea suffered a shock 3-0 defeat at home to Steve Bruce’s Sunderland. Before the game, bookies had set the odds of a Sunderland win at 14/1. Although Chelsea were missing Frank Lampard, the real cause of this horrific loss was an uninterested display from the home side, which was met by a dazzling display from the visitors, who had a young Danny Welbeck up front. It is worth noting that this loss came on the back of Ray Wilkin’s departure, which had occurred a few days earlier. The Chelsea Assistant Manager had been told that his contract would not be renewed and that he was to leave the club with immediate effect. After his departure, Chelsea’s form began to falter, which inevitably led to the sacking of manager Carlo Ancelotti at the end of the season. 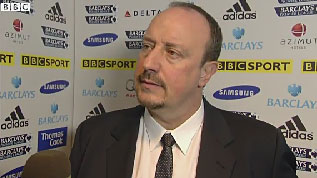 In the 2012-2013 season, Chelsea were defeated 1-0 at home by Queens Park Rangers, who were at the bottom of the table. Although Chelsea had dominated throughout game, a 78th-minute strike by ex-Chelsea player Shaun Wright-Phillips allowed the visitors to steal a must-needed win. Throughout the game, QPR played with a resolutely packed defense, which cut off the service to Chelsea’s Fernando Torres. The loss led to criticism of interim Chelsea manager Rafael Benitez, who had decided to start the game with both Eden Hazard and Juan Mata on the bench. Benitez later said: “We were tired and we weren’t precise. We made a mistake and gave them their chance. I don’t regret the changes because we can’t carry on with the same players in every game. If you’re playing a team at the bottom of the table at home, you have to trust your players and I trust them.”

If you liked this, you might like my article on the dirtiest teams in the Premier League.