Don’t buy penny stocks. It’s a simple rule to live by if you don’t want to lose all of your money. If there is one thing you need to understand, it is this: Penny stocks are not for investors, they are for gamblers.

For every tale of a “big win”, you will find hundreds of dejected forum messages from people whose money has whittled away to nothing. Sadly, they will often spend months wishfully hoping for that one “bounce” that never comes.

Meanwhile, the people who originally encouraged them to buy this crap have long since sold up and scarpered away.

In short: Do NOT buy penny stocks. Furthermore, you should completely ignore anyone who tells you otherwise. These people are either misinformed or they are in it for their own personal gain.

What is a penny stock?

Technically speaking, penny stocks are shares of small companies that typically trade for $5 or less. In spite of this “official” definition, many traders will only apply the “penny stock” label to companies that trade below $1 per share.

In some cases, these penny stocks will be available to buy on large stock exchanges such as the NYSE. However, in most cases, they can only be purchased OTC (Over The Counter).

This is because they do not meet the requirements set down by large exchanges. In other words, these stocks have failed to meet a certain set of standards or criteria.

For example, stocks on the New York Stock Exchange or the Nasdaq can become “penny stocks” once their value falls below $5 dollars.

If the value continues to fall below $1 per share, then the company will be in danger of becoming “delisted”.

At this point, the company will be given a grace period to turn things around. If it is unable to do so, it will be removed from the exchange.

Once this happens, the company usually loses even more of its value and it begins to trade OTC.

Why shouldn’t I buy penny stocks?

More often than not, penny stocks are volatile shares in small companies that are failing. In most cases, these companies are in a death spiral, or at least a “death slide”, where the value of the stock continues to decline until they are practically worthless.

Essentially, many of these companies are circling the drain.

Think about it. If these companies were “good” companies that had potential, the stock price would reflect that.

However, in this case, the market has decided that something is wrong. In other words, it’s finances are unsustainable or there is no future for the product or service that they are selling.

That or it is a speculative company that is relatively new and unproven.

Another issue with these small penny stock companies is that it is often difficult to find reliable information about them. Consequently, they are more prone to “pump and dump” schemes, where “promoters” will big them up until the stock price rises.

After that, these “promoters” will sell their shares for a profit and run, leaving behind the “bagholders” who now own stock in a company that is practically worthless.

To sum it up: Buying a penny stock is a gamble. It is like jumping onto a burning ship and hoping that it somehow makes it ashore.

If you’re willing to take on this amount of risk, then you’re probably better off going to a casino or betting at a bookmakers instead. At least their odds are more transparent.

Can you make money on penny stocks?

Certain penny stocks can have “bounces” as they slide downward into nothingness. However, these bounces are few and far between. Furthermore, these bounces can be extremely difficult to catch.

History is full of traders who believed that they were smart enough to catch these bounces and “time the market”.

Unfortunately, many of them jumped in at the wrong time and got their asses handed to them. They then had to watch as their money slowly evaporated into nothing and the company was delisted.

There can be potential in newer, unproven companies. However, the data shows us that most companies fail. In fact, 20% of companies fail within the first two years. And even if a company doesn’t fail immediately, it can still flounder around and slowly lose value over time.

No. Belfort made his money by convincing other people to purchase penny stocks.

His brokerage firm, Stratton Oakmont, marketed these crappy penny stocks to investors and then defrauded them using “pump and dump” tactics.

It was a fraud. Hence the reason he went to prison in the end. 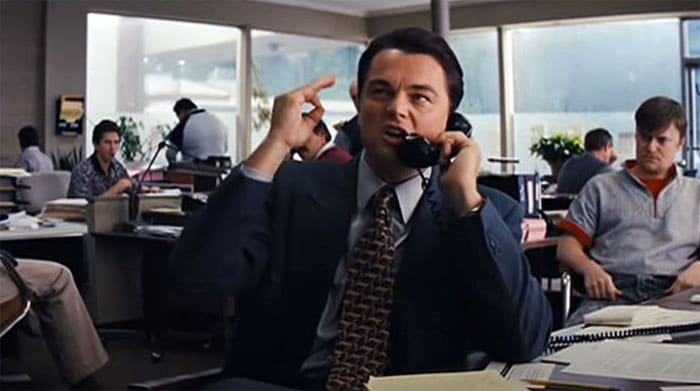 Jordan Belfort makes a cold call to a potential investor.

In the movie, Belfort makes a phone call to a potential client. During the call, he promotes a “cutting edge hi-tech firm” called Aerotyne International. However, just as Belfort is saying this, a photograph of a small shed is shown. 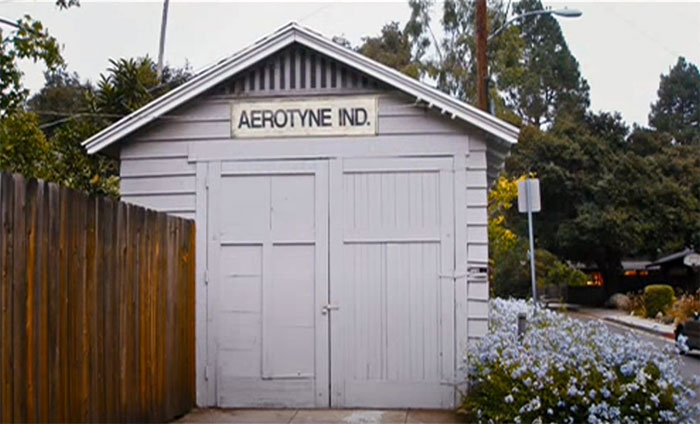 Aerotyne International, which was clearly not the “cutting edge hi-tech” firm that Belfort portrayed it as.

Although this is a fictional scene and Aerotyne doesn’t exist, it serves as a good example. With penny stocks, it is hard to know exactly what you are actually investing in.

How do people manipulate penny stocks?

People manipulate penny stocks via “pump and dump” schemes. They promote the stock (pump) and then sell their shares (dump) as soon as enough people have bought in.

By promoting the stock and getting people to buy shares, they can increase the price. Then, once they feel that the price is high enough, they can sell and leave everyone else in the dirt.

By artificially increasing the price of a stock, they are giving themselves a favorable exit.

This is why you should always be wary of “influencers” and social media “stock gurus” who have an “inside scoop”. If they are touting some random penny stock company, then it is possible that they are trying to use you to increase the price.

Similarly, you should always be cautious about following the advice of posters on forums and websites such as StockTwits.

In most cases, their optimism is either misplaced or they are faking it so that other people like you will be more likely to buy in.

But my friend made money on penny stocks?

Maybe he did, maybe he didn’t. Maybe he won big and then lost even more money on the next trade. We all know “that guy” who will brag about his winnings but never mention anything about his losses.

I once doubled my money on a penny stock back when I was stupid enough to play around with them. A week or two later, I lost a third of my investment in another penny stock and was forced to sell off.

In the end, that stock price never recovered. I was extremely lucky to hit the “eject” button when I did because I only lost a third of my money. Other “investors” who stuck around lost far more.

The truth is, there is always the chance that someone will get extremely lucky. I mean, people win the lottery all of the time. However, that doesn’t mean that you or I are going to win it.

Regardless of people’s “success” stories, the fact remains the same: Penny stocks are inherently risky. Do not buy them.