In the world of stocks and cryptocurrencies, being early is the same as being wrong.

Especially if you are dealing with options.

For example, you might be able to predict a crash. However, it is unlikely that you will be able to pinpoint the exact moment it will occur.

As the saying goes:

“The markets can remain irrational longer than you can remain solvent.”

It does not matter if “indicator X” is screaming that a certain stock will climb higher. It does matter if an event in Asia is likely to have an adverse knock-on effect in the future.

In many cases, the market will not react as quickly as you think it should.

To complicate things even further, it can be difficult to discern whether or not investors have already priced an event into the market.

In other words, they might have already noted that X or Y is likely to occur.

“Being early is the same as being wrong” is especially true when you are dealing with options.

The problem with options is that they expire.

If you believe that the stock price of a company is likely to plummet, then you can buy puts.

If the price falls before the expiration date, then it is likely that you will make a profit. However, if the stock price holds up, then it is possible that your puts will expire worthless.

In this case, you were right, but you still lost.

Why? Because you were too early.

Although you knew that the company’s business model was eventually going to fail, you were unable to predict when the rest of the market was going to wake up and realize it.

Standing on the sidelines can also hurt.

Standing on the sidelines can also hurt if your prediction doesn’t come true fast enough.

In our article about failed stock market predictions, we pointed out that economists and analysts have been calling “the top” for years now. If you had listened to these predictions back in 2016 and 2017, then you would have missed out on one of the greatest bull runs in history.

Last week, we wrote about the dangers of trying to time the housing market. In that article, we highlighted how experts have been warning about a correction in the Irish housing market for the past four years. However, despite these warnings, prices have continued to rise.

When Bitcoin reached a new high in December of 2020, several of my friends and coworkers predicted that it would crash again.

A number of online commentators were also making similar claims.

Although they were eventually right, it took four more months for those predictions to finally come true. During that time frame, Bitcoin went from $17K to nearly $64K in April.

Furthermore, when it did “crash”, it bottomed out at $29K, which is $12K higher than what the price was when they initially made their predictions. 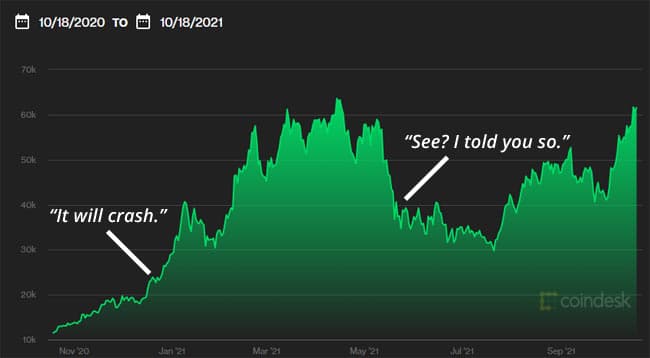 Although they had missed out on gains of 115%, that didn’t stop some of them from crowing about how “right” they were.

This is a perfect example of how being too early is basically the same thing as being wrong.

In this case, their predictions were ultimately correct. However, they still missed out.