Jake Paul can beat Ben Askren in a boxing match.

There, I said it.

Anyone who tells you otherwise hasn’t been paying attention. 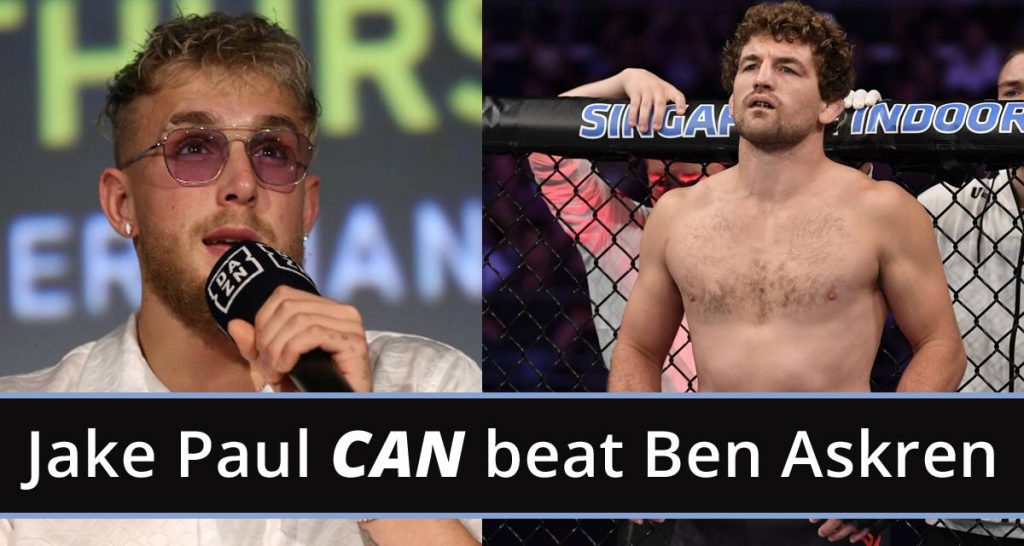 On the surface, this fight might look like a boxing match between an annoying Youtube kid and a hardened MMA veteran. However, that is not the case.

Ben Askren isn’t in the greatest shape of his life.

Askren is a retired MMA fighter who is 36 years of age. In 2019, he called time on his career after doctors said that he would probably need a hip replacement.

Although Askren did not require a hip replacement in the end, he still underwent surgery for the issue.

As you can see, this is not a fighter who is at the peak of his career.

Ben Askren is a wrestler, not a boxer. And Jake Paul knows this.

This is the most important fact of all.

Although Askren is a seasoned MMA fighter, he is not considered to be a good boxer. In fact, many MMA fans will tell you that he is probably one of the worst strikers in the game.

If you take a look at the following video, you will see that his boxing skills are actually quite poor.

Askren’s strength has always been wrestling. In other words, he fights by grappling with his opponent and then taking them down onto the mat.

The problem here is that Askren is fighting Jake Paul in a boxing match, not an MMA match. As a result, he will be unable to use his strengths.

Instead, Ben Askren will have to fight Jake Paul using his biggest weakness. And to make matters even worse, he will have to do so while wearing gloves that are heavier than what he is used to.

It is my opinion that Jake Paul knows all of this. In other words, I believe that Paul and his camp intentionally chose the “worst” “real fighter” that they could find.

Are you saying that Askren is definitely going to lose to Jake Paul?

No, that is not what I am saying.

Although Askren is a bad striker, he does have three things going for him.

Basically, I would not rule him out. There are two scenarios where I see Askren winning.

The bookies odds show that Jake Paul is likely to beat Ben Askren.

If you take a look at the current odds for this fight, you will see that most bookmakers believe that Jake Paul is more likely win.

As I write this, bookmakers on average are giving Jake Paul a 70% chance of winning. For example, Paddy Power currently have Paul at 4/7, which implies a 63.7% probability of him defeating Askren.

To sum it up, the bookmakers believe that Jake Paul is the favorite going into this fight.

And as we all know, the bookmakers tend to be right about most things.

Why is Jake Paul the favorite to beat Ben Askren?

Although most know Jake Paul as an “Internet personality”, he has been training in the sport of boxing for a number of years. He is also young and in good shape.

“He’s way better than an Internet dude with two fights.”

Former kickboxer and pro boxer Dewey Cooper believes that Paul can be “formidable” in the boxing ring. In the run-up to Jake Paul’s fight with NBA star Nate Robinson, Cooper watched Jake Paul sparring against a veteran Romanian kickboxer.

According to Cooper, the sparring session was “easy work” for the Youtube star, who was able to drop his opponent to the mat.

Professional boxer BJ Flores worked with Jake Paul in 2020 and says that Paul spent a lot of his time during the summer sparring against “solid young boxers”. Flores also said that Paul works out twice per day and that he will watch film analysis of fights.

More recently, it was reported that Paul had been training with former boxing legend Evander Holyfield.

As you can see, boxing is not a new sport for Jake Paul. He takes his preparations for a fight very seriously and he has been in training for quite some time.

To make a long story short, it is unlikely that this will be an easy fight for a retired MMA fighter who has relied on his wrestling skills throughout his career. He is going up against a younger fighter who is relatively-well trained in the sport of boxing.

All in all, I would not be surprised if Jake Paul beats Ben Askren with a KO.