About a week or two ago, a strange knocking or “shock wave” sound started to come from my attic. This loud “knock” seemed to occur whenever I turned my faucet on and off. It also occurred when my washing machine or my dishwasher was starting to fill up.

What is causing this strange knocking sound?

After doing some research and reading various help guides, it quickly became clear to me that I was experiencing a common plumbing issue called water hammer.

What is water hammer?

Water hammer is what happens when a fast-moving water supply is suddenly shut off. It is the sound of water banging up against the valves in your pipes. When a valve is suddenly closed off, a surge of pressure can build up in the pipes:

A graph showing the build up of pressure after a valve has been closed. As you can see, there is a big surge at 0.1 seconds.

Remember that water is relatively heavy (dense) and that it can gain a lot of momentum as it travels through the pipes in your home.

When you quickly turn off your faucet or your washing machine closes its water inlet valve, that momentum has nowhere to go. As a result, it slams up against the valve. The next thing you know, you’re hearing a strange knocking sound reverberating inside your walls.

Can water hammer damage your pipes?

As you can imagine, these small leaks can quickly turn into bigger leaks. Consequently, you may end up with structural damage and dampness, which can create the perfect breathing ground for other serious issues such as mold.

It is worth noting that it is not just the pipe structure itself that will be put under strain. As the pipes vibrate from the resulting shock wave, they will pull at the fittings that keep them secured to the wall. If this continues, these fittings may be pulled out of the wall altogether.

In conclusion: Yes, water hammer can damage your pipes. This is an issue that you should investigate before it becomes more than just a noisy annoyance. Allowing water to regularly slam into the elbows and valves in your piping system is not a great idea. At some point, one of these components is probably going to fail.

Most modern plumbing systems are equipped with air chambers. These air chambers act like cushions. When a sudden surge of water hits the air chamber, the air in the chamber helps to soften the blow.

Take the following air chamber as an example: 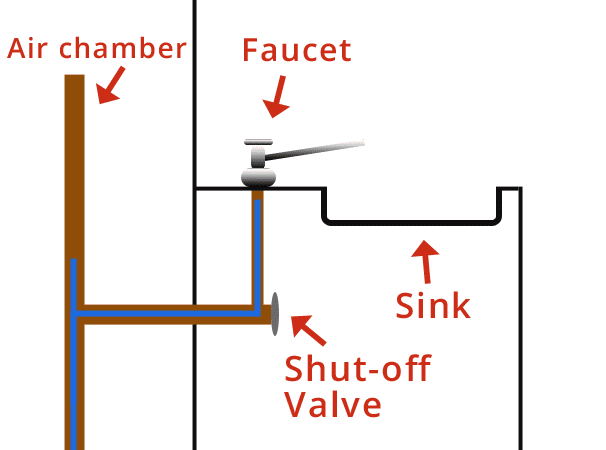 A rough diagram of an air chamber behind a sink.

In the diagram above, there is an air chamber behind the wall. This air chamber helps to soften the surge of water that comes rushing towards the sink.

Unfortunately, in some cases, these air chambers can become waterlogged. This happens when a surge of water manages to get into the chamber and absorb the air. As a result, it can no longer function as a cushion.

In my case, an air chamber became flooded after I loosened a valve and increased the water pressure to my house.

DIY: How to fix water hammer.

If these loud sounds weren’t there before, then it is possible that one or more of your air chambers have become flooded. To fix this issue, you will need to completely drain the water from your pipes.

Thankfully, you do not need to be a plumber to do this. You don’t even have to be an expert at DIY. It is actually a pretty easy fix to attempt all by yourself.

To re-fill your air chambers with air, you will need to take the following steps:

And that’s it! If it the fix was successful, you should no longer hear that awful knocking sound anymore.

That didn’t fix my issue!

A plumber can investigate the issue and install a Water Shock Arrestor, which is a mechanical advice that contains springs and an air bladder to help soften the flow. These are preferred in commercial buildings and apartment blocks, where air chambers can be ineffective.

If the pressure coming into your property is too high, a plumber may also install a regulator that keeps the PSI (pressure) at a recommended level. This device is usually installed close to the water input so that it can control the supply of water that is coming into your home. If pressure is the issue here, then you should definitely consult a professional, as a PSI that is above normal levels can cause damage to pipes, fittings and kitchen appliances.