If you are losing followers on Instagram, then it might be because you are posting too much. Or perhaps some of your followers were fake “bot” accounts.

It is also possible that you are not putting in as much effort as you originally did when you first started your Instagram page.

In other words, there can be multiple reasons why you are losing followers. Usually, it tends to be a combination of things instead of just one single reason. 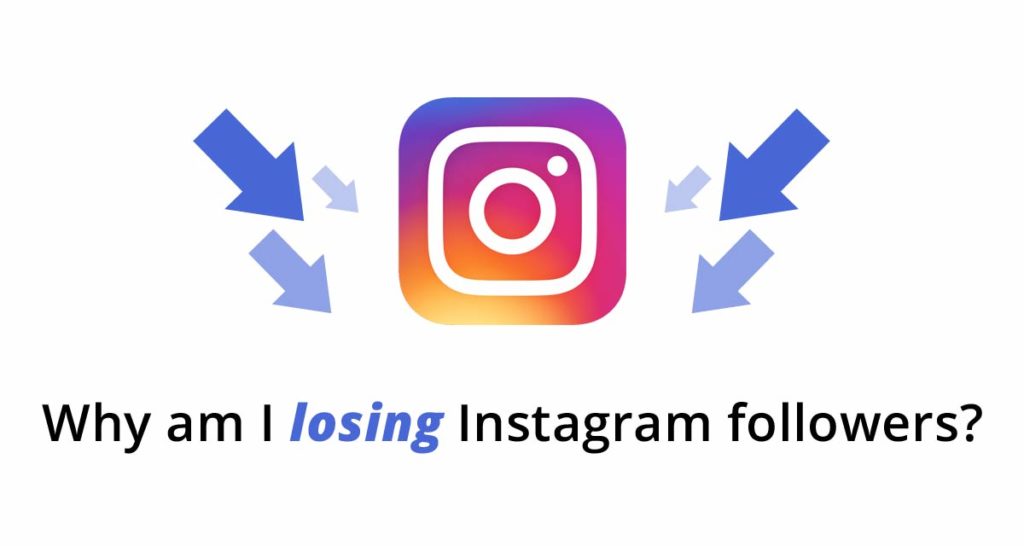 In this guide, we are going to take a look at some of the most common reasons.

Fake follower accounts will only last for so long.

There are two types of fake followers.

The problem with fake accounts is that Instagram’s automated systems can find them and delete them at any moment.

As a result, a “purge” of bot profiles could cause your follower account to drop.

If you paid for some of these followers, then the drop will be even more noticeable.

In 2014, over 3.5 million fake accounts were removed from Justin Bieber’s follower list.

This is a different type of fake follower.

However, they have no intention of actually looking at anyone’s content. In fact, many of them will start unfollowing people once their account gets big enough.

This kind of behavior isn’t new. It also occurs on other social media platforms such as Twitter.

People are unfollowing you because you post too much.

However, is it interesting enough for you to post 4 or 5 times per day?

Instagram pages that post too much can take over your homepage. As a result, they can make it more difficult to see your friend’s photos.

For example, I followed a meme page not so long ago. However, within a week, I had unfollowed it. Why? Because it posted way too much content.

I found the memes funny, but I didn’t want them to overwhelm my feed.

Similarly, I also muted a friend because she put up at least 10 stories every single day. It started to feel as though her Instagram was a conveyor belt.

To make a long story short, posting too much can grate on people. It can also cause a drop in the quality of your content.

Which is better? One quality post or four mediocre posts?

You are posting about divisive topics.

If you post about politics or sensitive issues in general, then it is likely that you are going to annoy some people.

The more divisive a topic is, the more followers you stand to lose.

The vast majority of your followers might agree with you on the subject. However, there will always be a minority of people who don’t.

At times, it can feel as though the entire Internet has taken a certain stance on a topic. Although this might seem like the case, it usually isn’t. Instead, there will always be a silent minority of people who have a different view.

Does this mean that you should avoid posting about politics? Of course not.

The point here is that you should be willing to accept a drop in followers if you do so.

These kinds of topics are like mine fields. One wrong step or badly-worded comment and you can become unpopular overnight.

People are unfollowing you because your content is becoming stale.

Content that was originally interesting or funny can become “stale” after a while.

It’s a tale as old as the Internet itself. Trends come and go, fashion changes and humor evolves.

For example, if you are a makeup artist that focuses on a specific style or trend, then you are essentially tying the success of your Instagram account to that style. In other words, if that trend goes out of style, your page will fade along with it.

Basically, if your content remains stagnant, time can slowly pass you by. Before you even realize it, people are beginning to silently “move on” and unfollow you.

It’s not that they dislike you or your page. It’s just that they no longer find it as interesting as they once did.

This can be especially true if your account relies on a gimmick or a certain “shtick”.

In the previous section, we pointed out that content can become stale if it stays the same.

However, there is a flip side to this. If you change your content too much, then that might also cause people to unfollow you.

In this case, the change is way too drastic. These people originally followed your page to see recipes. They did not follow you to see the latest fashion trends.

If you had slowly transitioned to making fancy cocktails instead of food, then that might have been more acceptable.

The main trick here is to watch your engagement. If you’re trying something new, pay attention to how many likes it gets in comparison to your usual content. If the engagements are higher than usual, you might be onto a winner.

Let’s face it. We all lose interest in certain subjects. People can become obsessed with a hobby or a topic for a couple of months and then slowly fall out of love with it.

Fitness, cycling, baking, DIY, photography, fishing… you name it. People will pick up these hobbies and then drop them again.

You come across as rude, egotistical or just generally… unlikable.

If you come across as rude, egotistical or generally unlikable, then people will unfollow you.

It does not matter how interesting your content is. If they take a dislike to you, they will leave.

Examples of behaviors that people dislike.

Your followers can either make you or break you. Therefore, slowly making them dislike you over time is not a smart strategy.

Be polite and don’t brag. Those are two very simple rules to live by.

You are uploading too many advertisements or promos.

It does not matter if it is a paid advertisement or if you are helping out a good cause.

If you post too much promotional stuff, people may unfollow you. This is especially true if the content has little semblance to your own.

Remember that these people followed you in order to see your content. They do not want to spend their entire day looking at ads.

People deactivate their accounts all of the time.

People deactivate their Instagram accounts all of the time.

If one of your followers does delete their account, then your follower count will decrease. This is because the account no longer exists on the platform.

You are not bringing in enough new followers.

When an Instagram page is growing, we often do not realize it when people unfollow.

Unless you pay attention to your page’s insights, you are probably not going to realize that someone left.

It is only when the pace of new followers begins to slow down that we begin to notice these things.

This slowdown can happen for a number of different reasons.

As you can see, there can be multiple reasons for this. So much, in fact, that we could write an entire article about it.

There are a multitude of reasons that could explain why your follower count is decreasing.

To try and stop this from happening, you have to give yourself a bit of a “shake”, so to speak.

What are you doing wrong? Which kinds of posts are falling flat? What can I do to brush out the cobwebs and spice things up a little? Is the content that once propelled me no longer as popular?

The problem here is that many of us take our followers for granted. We assume that they will always be there. As a result, we tend to take our foot off the pedal.

In other cases, people will burn themselves out. They spend months and months working hard on their Instagram pages, only to feel tired and demotivated. In cases like this, a break or a change is sometimes needed.