A while back, a friend of mine on Facebook mentioned the topic of suicide and recessions. His presumption being that suicides dramatically increase during periods of economic hardship.

I didn’t disagree with his theory. Personally, it made sense to me that suicide rates would skyrocket while people were out of work and struggling to pay their bills. However, out of curiosity, I decided to look up the actual figures.

And they kind of shocked me.

The official figures showed that although there was an increase in suicides during Ireland’s economic downtown, it wasn’t as much as I had expected it to be. Before I went to Google looking for answers, I was envisioning a 25% rise at the very least. Maybe even a 50% rise considering the state of the country at the time.

However, that was simply not the case.

Ireland was one of the worst hit countries during the 2008 global economic crisis. The property bubble that kept the economy rocketing upwards had burst and within a few years, unemployment increased from 5% to 15%. People were out of work, household debt had risen to unsustainable levels and the Irish population was on the receiving end of one austerity budget after another.

It was tough. And bleak.

At the time, the phrase “could the last one to leave turn off the lights on the way out?” became popular. The IMF had landed in Dublin and young Irish people were emigrating to Australia en masse. It felt like “game over” for a lot of people. The country would never recover from this catastrophe.

However, if you take the enormity of the situation in Ireland back then and compare it against the suicide figures, the increase is not as big as one might expect: 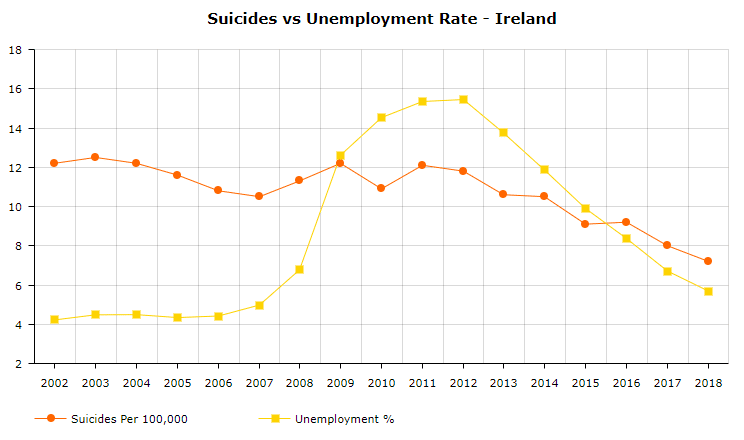 Strangely enough, the year with the highest suicides per 100,000 people was actually 2003, which was well before the economic crash. There was also a sudden dip in 2010, despite the unemployment figure rising by a further 2%.

Suicides per year in Ireland.

If you look at the number of suicides in Ireland per year, you can see that there is a noticeable increase in 2009. However, this increase is not as large as I initially expected, especially given the fact that the population of Ireland was increasing alongside with it:

Another interesting thing to note is that suicide rates have continued to fall well below the suicide rates that we saw during the heights of the Celtic Tiger. During peak “boom times”. Perhaps, a more willing and open approach to talking about mental health has led to its decline.

In 2015, UCC Professor Ella Arensman, who is the director of research at the National Suicide Research Foundation, said research showed that the number of suicides spiked during the 2008-2013 recession in Ireland. Although she was correct in saying this, the study she based this statement on only used surveillance data from 2004 to 2014. As a result, it did not include the suicide figures for 2002 and 2003 that you saw above.

Another interesting case to look at is the United States. Since 2000, suicides in the USA have been gradually increasing, despite all of the economic indicators.

I am in no way trying to downplay the impact that recessions can have on people’s mental health. However, the figures show that the causes of suicide are far more complex. It is not as a simple case of “recession = more suicides”. Perhaps, there are much bigger societal issues at play that we need to be looking out for.