In this article, we are going to look at how police caught some of the world’s most notorious serial killers. 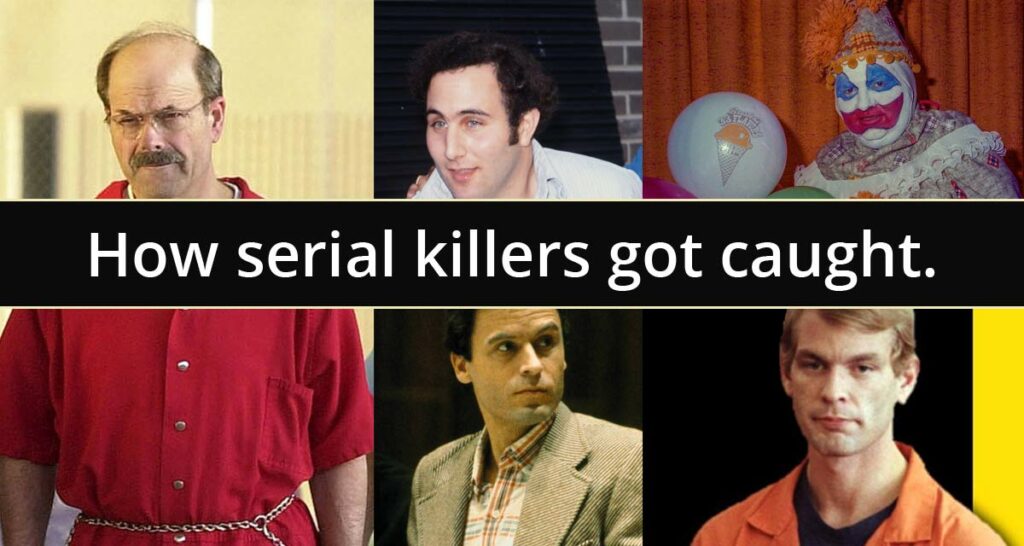 How serial killers were caught.

As you’ll see, many of these men were caught because they made one stupid mistake.

Usually, this happens because serial killers tend to get sloppy. In other words, they become more and more overconfident and careless as time goes on.

How BTK was caught.

In 2004, following a decade-long hiatus, the BTK killer, Dennis Rader, decided to resume his contact with the Wichita police and local newspapers.

In one of his letters, BTK asked the police if they were capable of tracing a floppy disk.

Of course, the police told him that they could not.

In February of 2005, Rader fell for the trap and sent the police a floppy disk containing some of his writings. 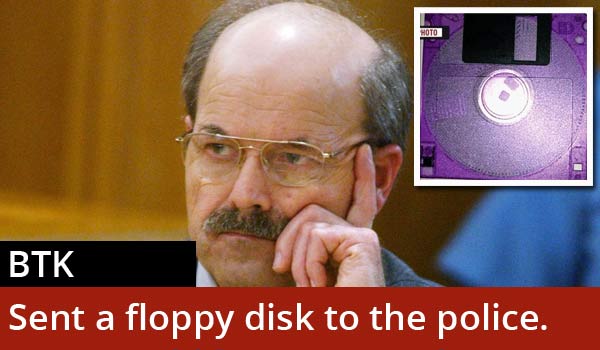 BTK and the purple floppy disk that led to his capture.

Unfortunately for him, the disk also contained a deleted Word document. After police recovered the deleted file, they found his first name and the name of his church.

As a result, they were able to identify him as a suspect and then catch him using DNA evidence.

Jeffrey Dahmer’s intended victim punched him in the face and fled.

In July of 1991, serial killer Jeffrey Dahmer brought 32-year-old Tracy Edwards back to his apartment with the intention of murdering him.

However, Edwards sensed that he was in danger and started to appease Dahmer by telling him that he was his friend and that he was not going to run away.

It seems as though Edwards’ quick thinking bought him some time.

Afterwards, Dahmer allowed him to sit in the living room and have a beer.

While they were sitting in the living room, Edwards said that he needed to use the bathroom and stood up.

It was at this stage that he seized on Dahmer’s lapse in concentration and punched him in the face. This stunned Dahmer and gave Edwards the opportunity to run out the front door. 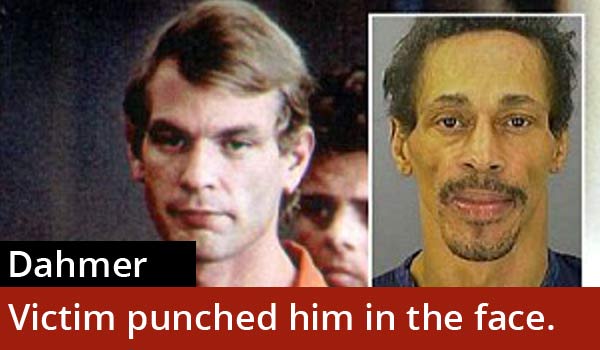 After escaping from the apartment, he flagged down two police officers.

The officers in question then visited Dahmer to investigate the claim that he had pulled a knife on Edwards.

During the visit, one of the officers spotted Polaroid photographs of dead bodies in an open drawer. This inevitably led to a search of his apartment and the shocking discovery of dismembered human remains.

Police caught serial killer Ted Bundy because he was driving a stolen car.

In the early hours of February 15th, 1978, Pensacola police officer David Lee was working the night shift when he saw an orange Volkswagen Beetle pulling out of an empty parking lot.

Officer Lee felt suspicious about the car and decided to run a tag on it.

The check showed that the car had been stolen three days beforehand.

As a result, Lee flipped his lights on and pulled the Beetle over. 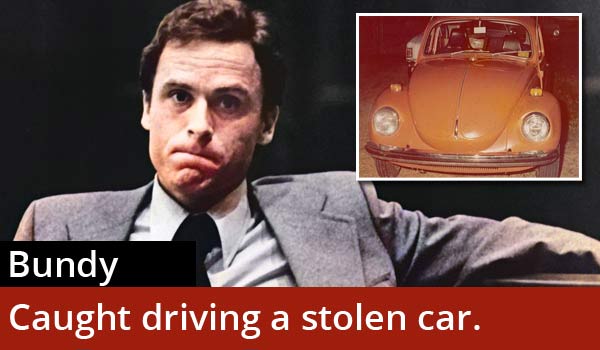 Bundy and the orange Beetle that he stole.

After Lee told the driver that he was under arrest, a fracas broke out between the two men. However, after a brief struggle, Lee managed to subdue the driver and handcuff him.

For a while, the driver of the car refused to give his real name to the police. However, the authorities were unrelenting and would not let him go until they were satisfied that they had his real identity.

Eventually, the driver gave in and identified himself.

His name was Ted Bundy and he was one of America’s most notorious serial killers.

John Wayne Gacy became a suspect in the disappearance of a 15-year-old boy.

In December of 1978, Gacy visited a pharmacy in Des Plaines, Illinois, in order to discuss a remodeling with the owner.

While he was there, he spotted 15-year-old teenager Robert Piest, who worked as a part-time employee at the store.

During the visit, Gacy mentioned that his contracting firm often employed teenagers.

Later on that evening, Piest told his mother that he was going to meet a building contractor to discuss a job. However, he never returned and a missing persons report was soon filed.

When police spoke to the owner of the pharmacy, he told them that the building contractor in question was most likely John Wayne Gacy. 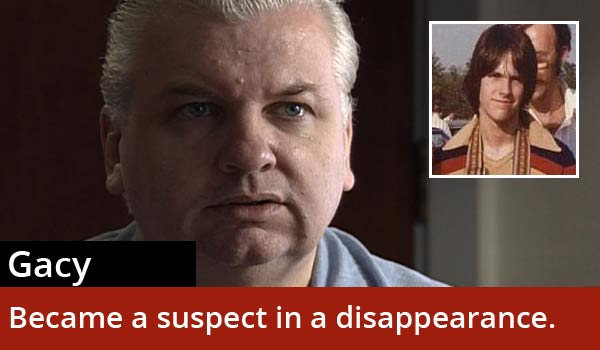 As a result, the authorities investigated Gacy’s background and discovered that he was once convicted of sodomizing a 15-year-old boy in Iowa back in 1967.

Although Gacy denied speaking to Piest, police continued to keep him under surveillance. They even searched his house. Although they did not find any evidence during the first search.

Not long after, police soon gathered enough evidence to get a second search warrant. However, this time, they focused on the crawl space beneath his home.

It was during this second search that police technicians discovered the grisly remains of 26 bodies.

Police captured serial killer David Berkowitz because he parked near a fire hydrant.

The “Son of Sam” David Berkowitz terrorized New York City between July of 1976 and July of 1977. During his crime spree, he shot six people dead with a revolver.

In August of 1977, Berkowitz parked beside a fire hydrant while he was revisiting one of his crime scenes. 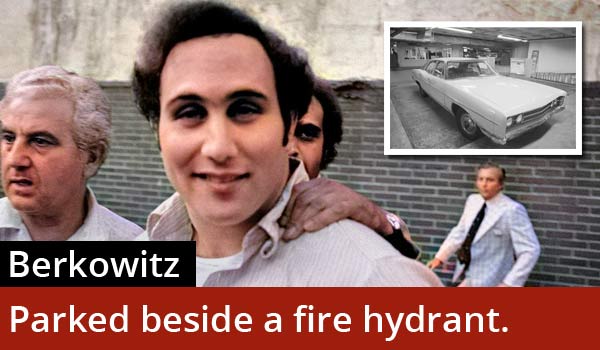 Serial killer David Berkowitz was caught because he parked beside a fire hydrant.

In New York City, it is illegal to park 15 feet of either side of a fire hydrant.

As a result, a patrol cop ended up ticketing his vehicle.

As this was going on, a local resident was out walking her dog in the area. The woman in question watched the officer as he put a ticket on the car and then leave.

Shortly afterwards, Berkowitz came from the direction of the car and walked past her. He then stopped and stared at her with a dark object in his hand.

This made her so uneasy that she decided to run home. As she was running away, she heard gun shots ringing out behind her.

After the woman contacted the police about the incident, they began to investigate every vehicle that had received a ticket in the area on that night.

This led them to David Berkowitz.

On August 10th, 1977, police found Berkowitz’s yellow Ford Galaxie parked outside of his apartment in Yonkers. While peering in through the windows, they saw a gun in the back seat.

During a search of the vehicle, they found ammunition, a threatening letter and a map of the crime scenes.

When Berkowitz attempted to enter his vehicle later on that night, police apprehended him.

After realizing what was going on, the “Son of Sam” simply smiled at one of the officers and said “Well, you got me.”