There are no wild snakes in Ireland.

Although some Irish people like to keep snakes as exotic pets, these snakes cannot be found in the wild. Instead, they are either specially bred or imported from abroad.

In the past, pet snakes may have escaped from their aquariums and made their way into the wild. Or worse, their owners may have selfishly released them into the wild without thinking about the consequences.

However, there is no evidence to suggest that an escaped species of snake has ever managed to establish itself in the Irish wilderness.

Why are there no snakes in Ireland?

Snakes are bad at heating themselves.

As a result, they tend to prefer warmer climates.

Ireland has a temperate maritime climate, which means that it usually doesn’t experience extreme temperatures.

For example, the average summer temperature in Ireland is around 14 degrees Celsius (57°F).

Snakes cannot put on fat or grow fur to keep themselves warm. Instead, they must bask in the sun or huddle together in large groups.

Consequently, most snake species would find it very difficult to thrive in Ireland’s climate.

Ireland typically receives around 1,100 to 1,600 hours of sunshine per year.

When you look at these statistics, it is easy to see why Ireland isn’t an ideal country for a creature that likes to bask itself in the sun.

Although some snake species established themselves in Britain, they never managed to make it as far as Ireland.

This is because the land bridge that connected Ireland to the rest of Europe was overwhelmed by the sea when the last Ice Age came to an end. 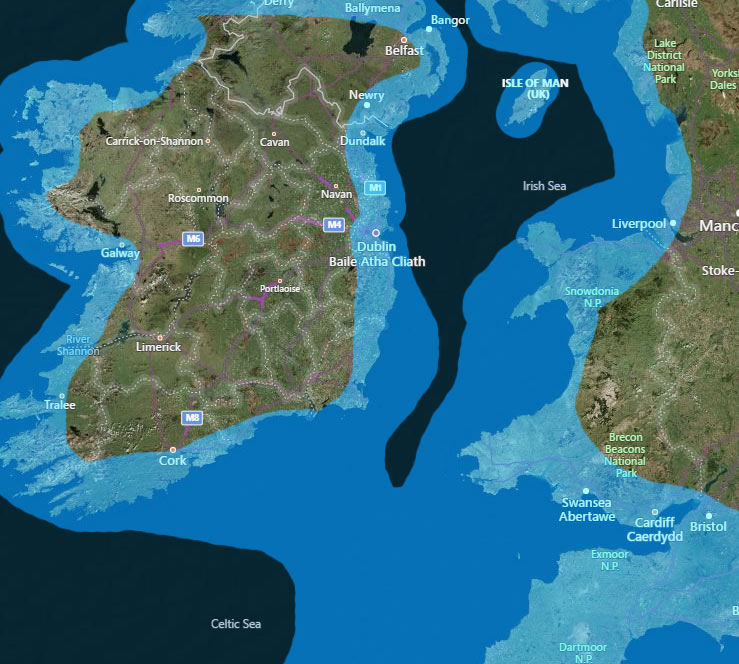 A map showing a rough sketch of the land bridge that would have existed between Ireland and Britain at the end of the last Ice Age.

As a result, only the “tougher” animals that could withstand the cold temperatures managed to make it to Ireland before the land bridge was submerged.

Essentially, they were too late. The bridge that would have led them to Ireland disappeared two thousand years before they arrived in Britain.

It wasn’t just snakes that missed the boat, either. Other cold-blooded reptiles also failed to reach Ireland before it was cut off from the continent.

Have there ever been snakes in Ireland?

There is no evidence to suggest that any snake species has ever existed in Ireland.

So far, paleontologists in Ireland have failed to find any trace of fossils or bone fragments belonging to snakes.

Therefore, we can safely conclude that the story of Saint Patrick ridding Ireland of snakes is just that: A story.

Or, more specifically, a metaphor for the Christian influence that he exerted on the island.

If you think about it for a second, the tale is almost too perfect. Saint Patrick spread the word of God throughout the country and banished the snakes—creatures that the Bible associates with Satan, trickery and temptation.

Most likely, this story is an allegory about how Saint Patrick took on the druids and eroded their power.

Could snakes ever live in Ireland?

Britain, which has a similar climate to Ireland, does have a number of snake species.

These include the venomous Adder, the Grass snake and the Smooth snake.

Although our similar climate does make it possible, the general consensus among experts is that snakes are slow to populate new areas and that there would need to be some sort of deliberate attempt to introduce them.

The Irish Sea is 50 miles wide at its narrowest point.

This distance would pose a great challenge for any snake wishing to swim from Britain to Ireland. Snakes also require numbers in order to breed and to huddle together for warmth.

Therefore, a single snake somehow making its way across the Irish Sea is probably not going to pose much of a risk to Ireland’s wildlife.

In the unlikely event that one did manage to make it across, it would probably live a lonely existence before dying off by itself.

Because of these challenges, snakes would probably have to be transported from Britain and then inserted into a suitable habitat. And even then, there still wouldn’t be any certainty that they would actually thrive.