Ted Bundy was not schizophrenic or psychotic. He was a cold and calculating killer who knew exactly what he was doing.

At no point did he lose touch with reality or experience hallucinations. 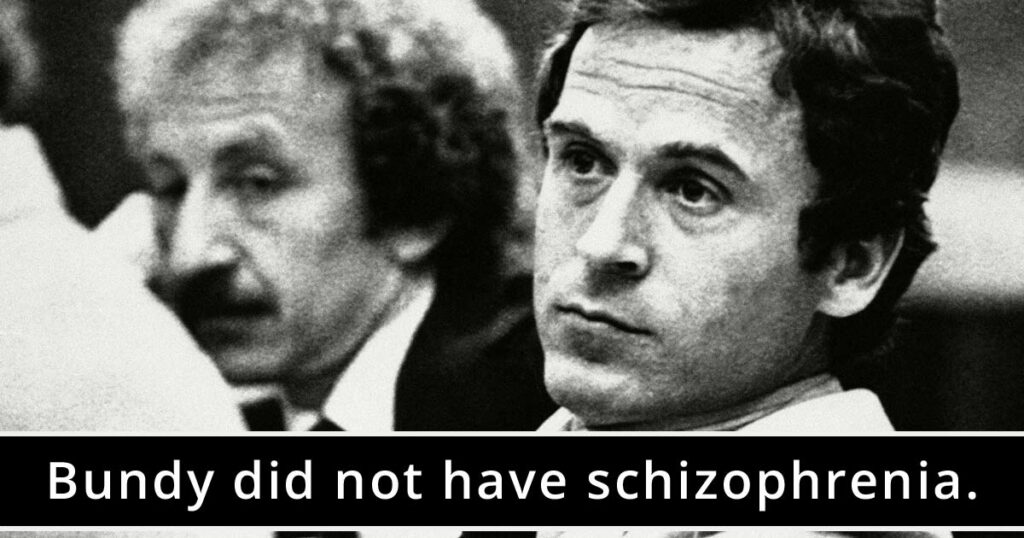 This was a man who spent his late teens and early adult life fantasizing about rape. Then, as the years wore on, his fantasies continued to evolve until he eventually became the “main character” in them.

Unfortunately, during his late 20s, Bundy decided that he wanted to turn these fantasies into a reality.

After he committed his first rape, it became somewhat of an addiction to him. A compulsion that he daydreamed about every day.

These fantasies had nothing to do with schizophrenia or psychosis. Instead, they were driven by a paraphilia.

He did not have schizophrenia.

According to the National Institute of Mental Health, schizophrenia is a mental illness that can cause a person to lose touch with reality.

For example, they might hear voices in their heads that do not exist. Or they might develop paranoid and delusional thoughts that are out-of-touch with reality.

During his various interviews and confessions, Ted Bundy did not mention hearing voices. Nor did he mention any other psychotic symptoms.

Furthermore, it would have been extremely difficult for him to represent himself in court if he was suffering from an unchecked mental illness such as schizophrenia.

People also fail to realize that Bundy put a significant amount of planning into some of his crimes. For example, he would sometimes stalk his victims for days or carry out “dry runs”.

Bundy was a psychopath. He knew exactly what he was doing.

Many people believe that “psycho” and “psychopath” are the same thing. However, they both have different meanings.

Typically speaking, “psycho” is an informal term which refers to a mentally unstable person. When people hear this word, they think of someone who is deranged.

However, psychopathy is different because it is a personality disorder. Furthermore, this disorder does not cause the person to lose touch with reality.

A psychopath is a manipulative and egotistical person who engages in anti-social behavior.

They do not feel guilt, empathy or remorse like a regular person does. However, they are often able to fake these emotions in order to “fit in” with the rest of society.

Although they can mimic empathy and guilt, they cannot feel them.

Despite all of their superficial charm, they are still cold, unemotional and callous beneath the surface.

As you can see, psychopathy has nothing to do with hallucinations.

As unimaginable as it might seem, Ted Bundy chose to target women for his own sexual gratification. His crime spree had nothing to do with hallucinations or paranoia.

He was well aware that he was committing horrific acts.

He even abused alcohol in order to lower his inhibitions and pick up the courage to carry out his crimes.

According to the US National Library of Medicine, people who suffer from schizophrenia are far more likely to cause harm to themselves than to others.

Therefore, it is insulting to compare them to someone as heartless as Ted Bundy.