A list of slang words and phrases that are primarily used in Wexford Town, Ireland. Note that some of these will overlap with other areas of the country.

A dogger is about one third of a cigarette. When somebody asks you for a dogger, they’re basically asking you to leave them 1/3rd of your cigarette. The general rule of thumb is: You can only say no if it’s your last one.

A skut / scut is about one tenth of a cigarette. People who call skut are typically bums who are so desperate for their nicotine fix that they’ll gladly smoke the browner. Note: If you’re unlucky enough to have somebody call “skut”, then it is fair to say that somebody else has already called “dogger”. Shameful stuff.

Often pronounced “Alright Sahn!” An endearing way of saying hello to another guy.

Once again: This is another way of saying hello to another guy. 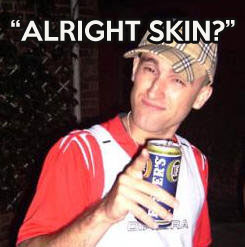 A young respectable gentleman greets you in his native language.

Hun / Hon: An endearing way of saying hello to a member of the opposite sex. i.e. It probably isn’t a good idea to say “Alright hun!” to another guy. It’ll just be… weird… and a bit awkward. It’s worth noting that different variations of this are used around the world. In America and Canada, it’s typically pronounced “hon”, whereas in Wexford, you’ll often hear people pronouncing it as “hun”. As somebody posted in the comment section below: “Hon” is short for the word “honey” / “hunny”.

An informal greeting. You can use this to greet people that walk by you on the street. Note: Don’t walk up Wexford’s Main Street saying “Well?” to everyone in sight. You’ll look like a crazy person.

All of them are rhetorical questions that don’t require further conversation (it will look weird if you actually stop and wait for an answer).

An insult. A “spa” is somebody who is a fool. Note that Irish people will often insult each other as an act of endearment. i.e. If you’re with a close group of Wexford people, don’t be surprised to hear them calling each other names such as “spa” etc. Note that this word is pretty popular in other parts of the country as well.

“You’re a bad fool” is basically just another way of calling you a fool. Like most insults; it can be said in an endearing / non-serious manner. I don’t think that I have ever heard it being said in a nasty way.

A lot of people will use the word “some” to express size / greatness. i.e. “Some good” means “very good” and “some weather” means “great weather.” “He’s some spa” translates into “He is a big fool.”

We’ll have you speaking Wexford Townie slang in no time.

“Quare” and “Some” are basically the exact same thing. “Quare good” means “Very good”, etc. Often used to express size / greatness. Not to be confused with “queer.”

Another word for “mother.” Ma is often pronounced “mah” in Wexford and other parts of Ireland. i.e. Don’t pronounce it as “maw”.

Another word for “father.”

Translates into “Get up out of that!” In Wexford Town, it is typically used to express delight or excitement at something that has just happened. As in “Are you serious?!” or “Did that really just happen?” For example: The team that you support scores a goal in injury time.

Often used when speaking to a guy. “Well lad!”

I haven’t heard this one in a while, but it’s worth including it anyway. I’ve no idea what “quapets” are – However, I do know that this phrase is basically just another way of saying “Hi” or “How are you?” Note that I’ve been told before that “quapets” are “farts”. I can’t verify if that is actually correct, however. Don’t actually use this yourself – It’s not the most tasteful ways of introducing yourself.

Going “on the hop” means ditching school or being truant. This is used in other parts of the country as well.

Spastic is the lengthier version of the word “spa.” Typically used for effect, when the person in question is angry or frustrated by someone. Not as endearing as the shorter version.

Smell of rage off ya!

This is typically said in jest, so don’t take it literally. You’ll look like a right spa if you do.

Wexford people will often use the word “ate” instead of “eat”, even if it’s not grammatically correct to do so. For example: “C’mon lad and we get something to ate!”

“Desh!” is another way of saying “deadly” or “very good!” Example: “That taco chip from Abra was some desh!”

In the bits / In the horrors.

Typically used to express how drunk or drugged-up a person is or was last night. “I was in the horrors last night!” or “Ha, that lad is in the bits.”

“Ah here!” is another way of saying “for f*ck sake” or “this is ridiculous!” Example usage: When it starts “lashing out of the heavens” during a barbecue.

Saying “No bother!” is just another way of saying “You’re welcome!” or “No problem!” i.e. “There is no bother on my part.”

Ragin’ is just another way of saying “raging” / “angry”. Extremely similar to saying “The smell of rage off you!”

“Shift” is a term that is often used to describe “french kissing” or simply “kissing with tongues.” If you were a teenager that grew up in Wexford, you probably heard the phrase “Will you shift me friend?” a few times (unless girls / guys weren’t attracted to you, in which case I’m very sorry for bringing it up).

This is basically the Wexford Townie version of “Sup!” or “What’s up?” Can mean “yes” in certain contexts.

The Irish word for “tea”. Pronounced “tay”. Often used in other parts of the country as well.

What’s wrong with you?

Typically said in a high-pitched townie accent. Used whenever somebody says or does something that is stupid or considered to be out-of-the-ordinary. Note: This is a rhetorical question. They’re not actually looking to see if there’s something wrong with you or not.

“The lads” is slang for a group of people that you hang out with. Can be used to describe both males and females. “Me and the lads are in Burger Mac if you want to come down to us sahn.”

Once again, “the boys” is slang for a group of guys that you hang out with. Note that the word “boys” is not an indicator of their age. The phrase can often be used to describe a group of guys in their 20s / 30s. 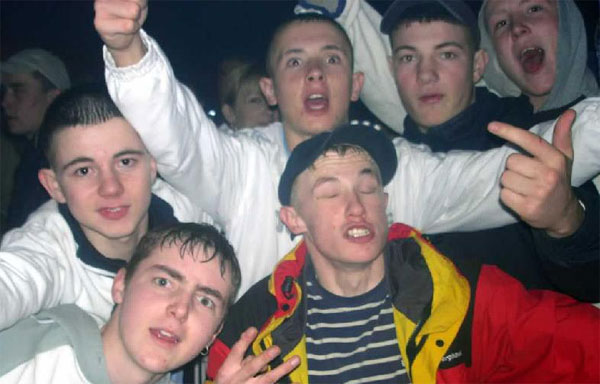 Me and the boys out in The Stores.

I already touched on the meaning of “some.” “Some craic” basically translates into “The craic was mighty!” or “We had great fun!” It has nothing to do with crack cocaine.

Up me hole picking daisies.

Typically used whenever somebody asks you where somebody else is. i.e. A humorous way of saying “I don’t know.” Note: Don’t use this phrase unless you’re friends with the person in question. It’s a tad bit informal to be using in a general conversation.

Typically used to describe a young girl. The age of the girl doesn’t really matter, so don’t be surprised to hear a 26 year old woman being referred to as a “young one / wan.”

“The head on ya!” is slang for different things. Most notably used when:

“Haha, the head on you though. In the bits last night, were ya?”

Both are used to describe something / someone that is good / great. For example: “I had a curry last night. It was some lethal.”

Used when somebody wants to register their agreement. For example: If you were to say “The weather is bad”, a Wexford Townie could reply and agree with you by saying “Awh, stop!”, even though they’re not actually asking you to stop anything.

Typically placed at the end of a statement. “That food was some good though. Absolutely hopped off it, so I did.”

Also found at the end of a statement. “That food was lethal! Some good, boy!” Note: We’re not talking about a boy. i.e. The above sentence can also be said to a female.

Sarcasm for “I won’t!” Can be used interchangeably with “I will, yea!”

Similar to “g’way from me now.” Feel free to use this when somebody is lying or being a bit of a blackguard (commonly pronounced blaggard).

Another word that is often tacked onto the end of a sentence. “The burgers in that shop are quare good, like!”

“Yer wan” / “your one”. Use this whenever you don’t know the name of a girl that you’re talking about. “The state of yer wan over there, though. She’s in the absolute horrors.”

The time has come for you to test yourself to see if you can walk amongst the good folks of Wexford Town. See if you can translate these sentences into regular English: