It irks me when people pretend that Wikileaks is some sort of heroic organization that stands up to corrupt governments by exposing the truth.

It irks me because all it takes is a cursory glance at the organization’s past actions and the timing of some of their releases to see that it has an agenda that goes well beyond whistle-blowing and government transparency.

Let’s take a look at some of the reasons why many people take Wikileaks with a huge pinch of salt.

Wikileaks’ criticism of The Panama Papers.

For a while now, there have been allegations that Russia has infiltrated Wikileaks and that its intelligence services are using the organization to target NATO and EU countries.

The theory is that by exerting influence over an organization such as Wikileaks, Russia can selectively leak secret documents that will damage its enemies and benefit its own geopolitical goals.

“The Panama Papers” were a massive leak of 11.5 million documents belonging to a Panama-based law firm called Mossack Fonseca. This leak contained information about offshore accounts and financial schemes being employed by politicians throughout the world.

The documents were anonymously leaked to a German journalist called Bastian Obermayer and then analyzed by the International Consortium of Investigative Journalists.

Unsurprisingly, Wikileaks and its founder, Julian Assange, were desperate in their attempts to label the Panama Papers leak as a US-funded attack on Russian President Vladimar Putin.

This is because the documents showed that close associates of Putin had $2 billion dollars stashed away in offshore accounts. 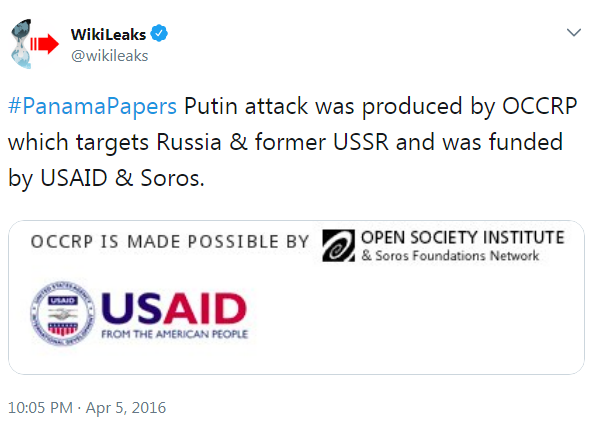 He then stated the following:

“WikiLeaks has showed us that official people and official organs of the US are behind this.”

There are two important things to note here:

Why is Wikileaks is so hesitant to publish documents concerning Russia?

It is suspicious that, after all these years, Wikileaks has never released anything substantial about the Russian government or its president, Vladimar Putin.

Are we supposed to believe that this famous whistleblower organization has never gained access to secret documents from one of the world’s most powerful nations?

In September of 2017, Wikileaks attempted to try and quell suspicions about its links to the Kremlin by publishing a “leak” called “Spy Files Russia”.

This leak showed that Russia had been using state surveillance to spy on Internet and cellphone users.

Even US whistleblower Edward Snowden was surprised by the apparent turnaround in Wikileaks’ policy. In a tweet, Snowden referred to it as a “plot twist.”

Unfortunately, it seems that this “leak” was tame and that it didn’t really offer anything new.

“It actually adds a few details to the picture, [but] it’s not that much.” He also added: “I would say it’s coming from the company, sent by people who obviously understand it doesn’t constitute a state secret, so it’s safe.”

Basically, whoever leaked these “Spy Files Russia” documents knew that they would not cause any harm to the Russian government.

Why did Wikileaks feel the sudden need to try and divert suspicion from itself?

Well, a month before this “Spy Files Russia” leak was published, an American news website called Foreign Policy revealed that Wikileaks had turned down the chance to publish leaked documents from the Russian Interior Ministry.

In the summer of 2016, when the US presidential campaign was heating up, Wikileaks refused to publish leaked documents that would have cast Russia in a negative light.

When asked why they decided to reject these documents, Wikileaks said that the documents had already been reported on by other news agencies in 2014.

So not only did Wikileaks refuse to publish the documents, it also lied about the reason behind its refusal.

“WikiLeaks rejects submissions that have already been published elsewhere.”

This begs the question: If this is Wikileaks’ policy, then why did the organization “re-leak” DNC emails that had already been published on the DCLeaks website?

In March of 2017, an estimated 60,000 people took part in anti-corruption protests across Russia.

While this was going on, Wikileaks made a nice little “wink wink, nudge nudge” post on Twitter, which basically insinuated that the protests in Russia were receiving an unfair amount of media attention: 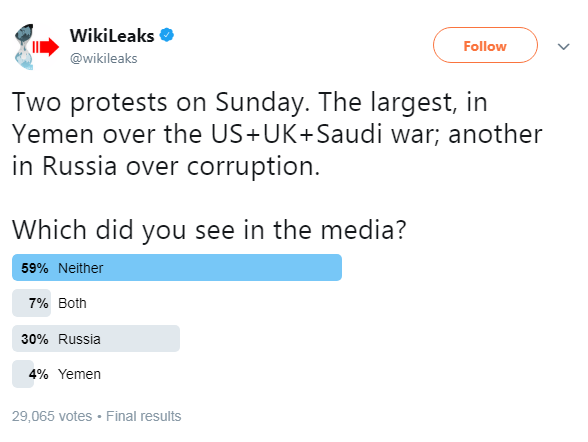 “Nothing to see here. Please look the other way.”

Why would Wikileaks have a problem with anti-corruption protests in Russia?

Wikileaks wanted the GOP to win the 2016 election.

A private Twitter conversation that was leaked in February of 2018 showed how Wikileaks wanted the GOP to win the US presidential election:

The conversation, which occurred in November of 2015, showed how Wikileaks saw Hillary Clinton as a “bright, well connected, sadistic sociopath”.

Their reasoning for supporting the GOP was that the party would be reigned in by the Democrats and the media, whereas Hilary Clinton would be given the freedom to enact hawkish interventionist policies.

Julian Assange’s fears of a Clinton presidency seemed to mirror those of Russia’s.

This might explain why Wikileaks seemed so pally with the Kremlin and the Republican Party:

“Hillary Clinton in The White House with her blood lust and ambitions of an empire with hawkish liberal-interventionist appointees like Anne-Marie Slaughter and digital expansionists such as Google integrated into the power structure. Then, the Republicans and Trump in opposition constantly saying she’s weak and not invading enough.”

In September of 2016, Wikileaks decided to message Donald Trump Jr. on Twitter and warn him about an anti-Trump website that had been launched: 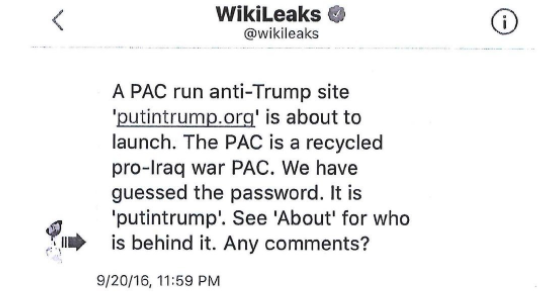 Let that sink in for a moment.

Wikileaks was so desperate to aid Trump’s presidential campaign that they were willing to try and “guess” the password of a website that published information about his alleged ties with Putin.

Later on in the conversation, they asked Trump Jr. to hand them over “one or more” of his father’s tax returns so that they could seem more impartial.

By improving the perception of their impartiality, their leaks could have a “higher impact” on Hillary Clinton’s presidential campaign: 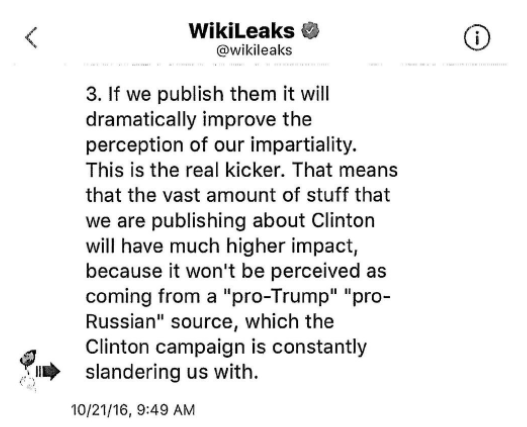 In 2012, when Wikileaks was having funding issues, Julian Assange agreed to host a show on Russia Today—a TV network that is funded by the Russian government.

In response, the Russian owner of the Independent and London Evening Standard, Alexander Lebedev, tweeted the following:

Shame on you, Mr Assange! Hard to imagine a more miserable finale for a ‘world order challenger’ than employee of state-controlled ‘Russia Today’.

For many people, it is difficult to overlook the irony of Julian Assange denouncing censorship on a Kremlin-controlled propaganda outlet.

When it was announced that Special Counsel Robert Mueller had charged 13 Russian nationals with interfering in the US election to help Trump, Wikileaks attempted to downplay the news: 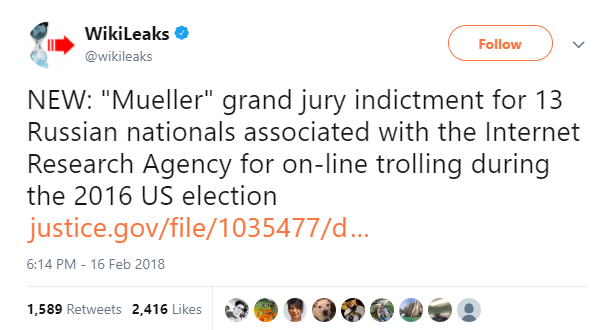 Note how they specifically used the phrase “online trolling”, as if this was just a group of trolls that were making pro-Trump posts on the Internet.

This is despite the fact that these “trolls”:

As you can see, this was far more than just “trolling.”

“No signs of Russian interference.”

In August of 2017, Wikileaks tweeted a news article about how there were no signs of Russian interference in Germany’s elections: 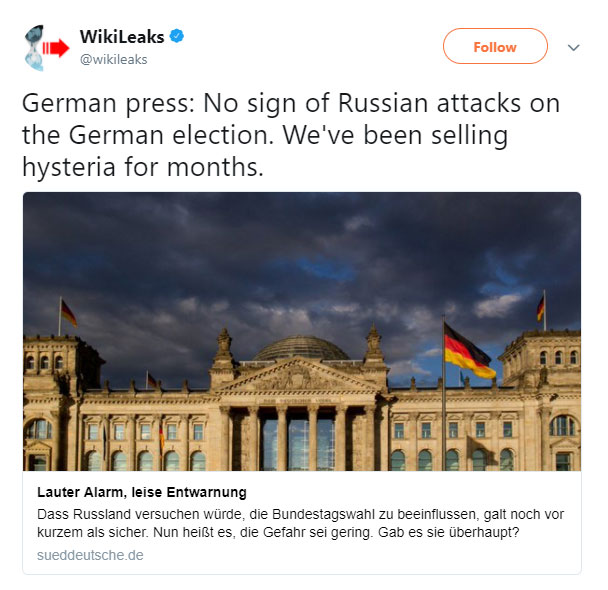 Here is another example, in which Wikileaks complains about the “Russian threat hysteria”: 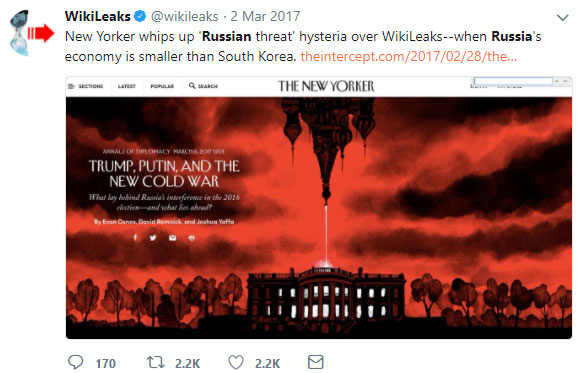 Saying that the “Russian threat” is “hysteria” because South Korea has a larger economy than Russia is misleading.

To put things into perspective:

Russia has a larger economy than Saudi Arabia, which is a country that Wikileaks says funded ISIS, promotes terrorism and sustained “efforts to influence political and religious opinion within Australia’s Arabic and Islamic communities”: 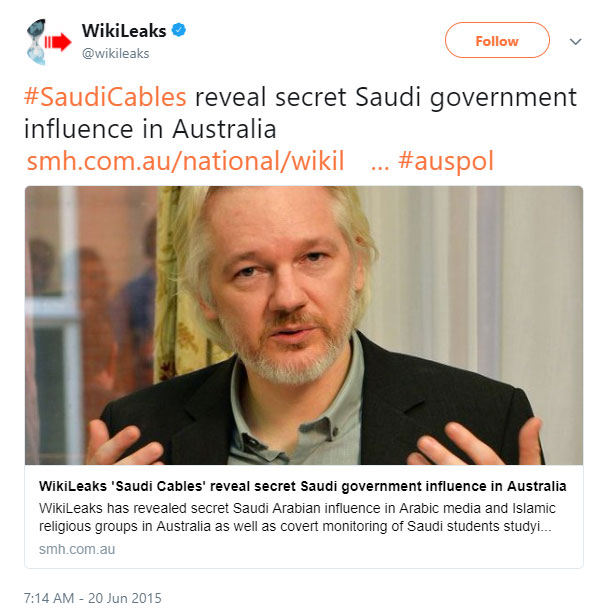 Somehow, Saudi Arabia has no problem being a threat, despite the size of their economy.

Wikileaks certainly didn’t like this cover image from The Economist: 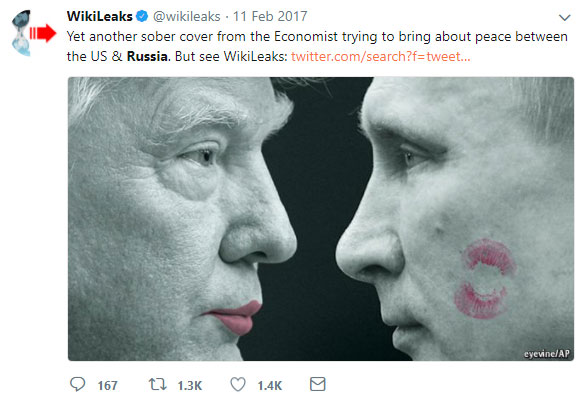 I love their usage of the word “peace” in that tweet. It’s so hyperbolic. “If you talk about Trump’s ‘strange’ relationship with Putin, it’s obviously because you want war.”

A weak attempt to dissuade the media from encroaching on the subject.

It’s OK for Putin to be a killer because the US is also a killer: 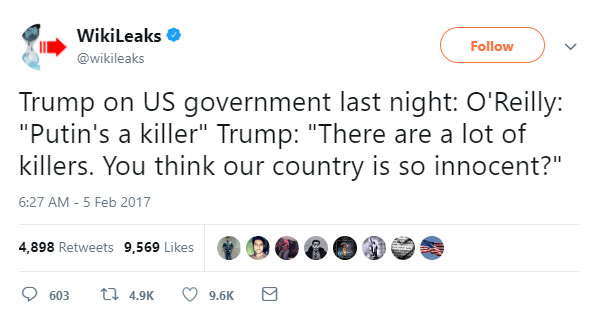 Translation: “You can’t criticize Putin for being a killer because the US also kills people.”

I’m just glad that Wikileaks decided to highlight such a travesty. Who else was going to look out for those poor Russian diplomats?

The Mueller indictment is a joke.

After it was announced that Robert Mueller had indicted 13 Russian nationals, Wikileaks founder Julian Assange showed his pro-Russia bias once again by stating that it was a “joke” and a “threat to freedom of the press”. 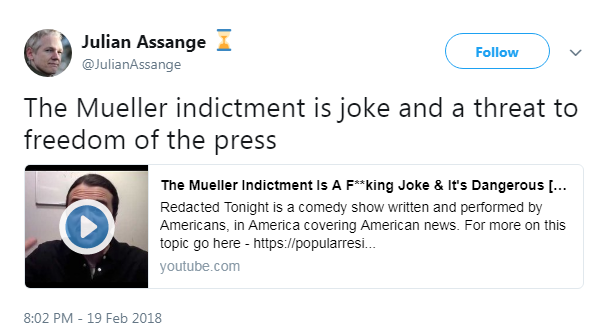 When news broke that Russian hackers had been probing US energy companies, Julian Assange reacted with some blatant whataboutism. 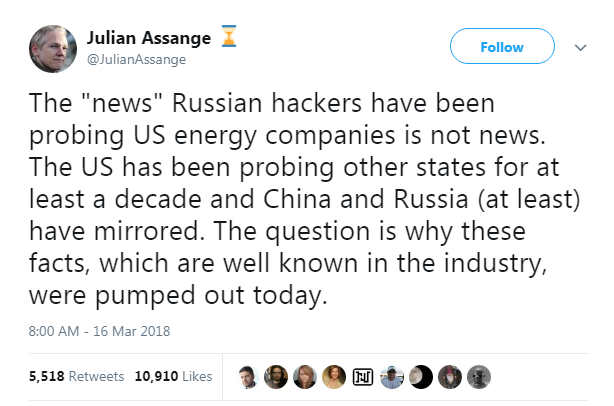 If this was a news story about US hackers probing Russian energy companies, he probably would have retweeted it.

For some reason, Assange thought that it was very important that his Twitter followers read the official Russian Ministry of Foreign Affairs statement on the nerve agent attack on Sergei Skripal: 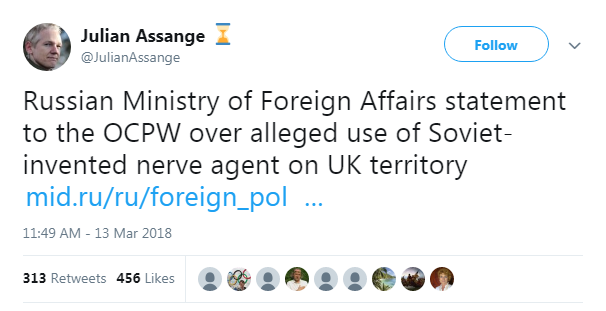 Ah, finally some truth on the matter.

He also felt that it was necessary to retweet the official Twitter account of the Russian Embassy in London: 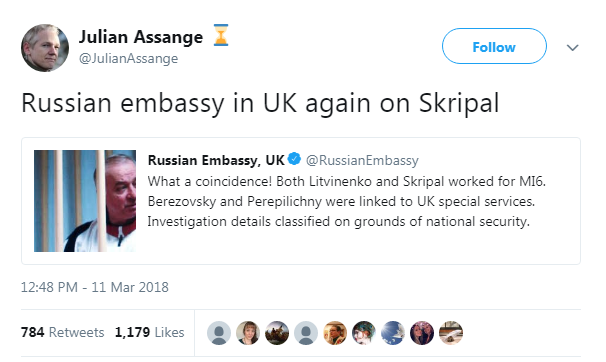 The propaganda war against Russia.

Assange attempts to cast doubt on the theory that Russia interfered in the US elections: 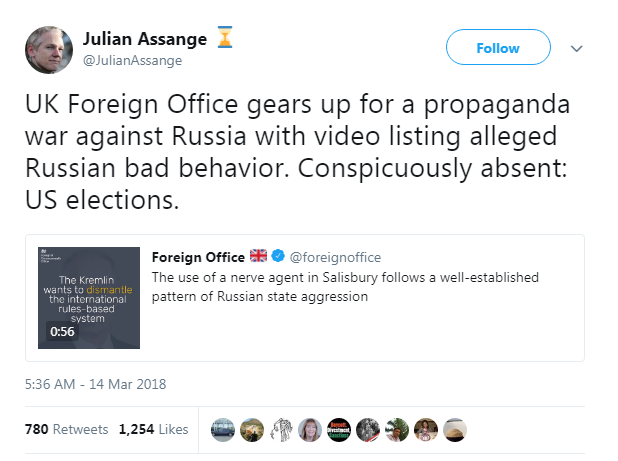 Yes, Julian. Poor, innocent Russia is being besieged by a propaganda war.

Let’s not forget the time Wikileaks made a strange tweet about Jews before eventually deleting it.

In case you’re out of the loop, those (((triple parentheses))) first started being used by alt-right blogs to highlight the names of Jewish individuals: 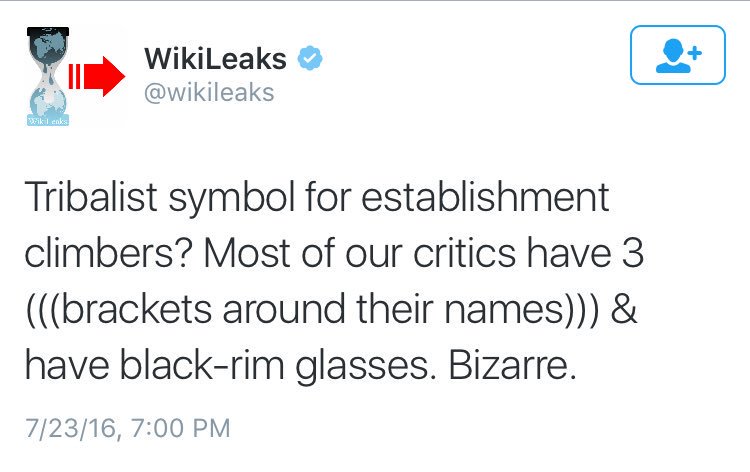 In March of 2018, news broke that a Facebook quiz website had harvested a vast amount of user data and passed it on to a data analysis company called Cambridge Analytica without their consent.

Cambridge Analytica then used this data to target voters on behalf of Trump during the 2016 US presidential election campaign.

As soon as this news broke, Wikileaks went into spin mode.

Here, you can see their attempt to make it look as though Obama’s campaign team had done the exact same thing:

Carol Davidsen, who was the speaker in the video that Wikileaks posted, actually replied to the above tweet:

So let’s just sum this up:

On the day that news broke about Cambridge Analytica, Wikileaks posted a two-year-old Youtube video with the title “Facebook scandal widens.”

They then proceeded to misquote the speaker in the video, all so they could spin it and make it look as though the Democratic Party was just as guilty.

The problem here is that Wikileaks is making a blatant false comparison.

A professor called Aleksandr Kogan created a quiz that harvested the personal information of its users.

Not only that, it also harvested the personal information of the people on their friend list.

The privacy policy of his quiz stated that all data was being used for research purposes only. This turned out to be completely false, however, as the data was eventually sold on to Cambridge Analytica, who used it to target voters on behalf of Donald Trump during the 2016 US election.

Users of this personality quiz were completely unaware that their data and the data of their friends were going to be passed on to a third party and then used to target voters during an election campaign.

Users were told exactly what data was being stored and why. They had to opt in and agree to their data being stored.

There is no comparison here. And anyone who attempts to make such a comparison is clearly doing so for partisan reasons.

The tweet above wasn’t just misleading, it was a straight-up lie.

And he knew that too.

Assange is extremely quick to make announcements about Russia’s innocence: 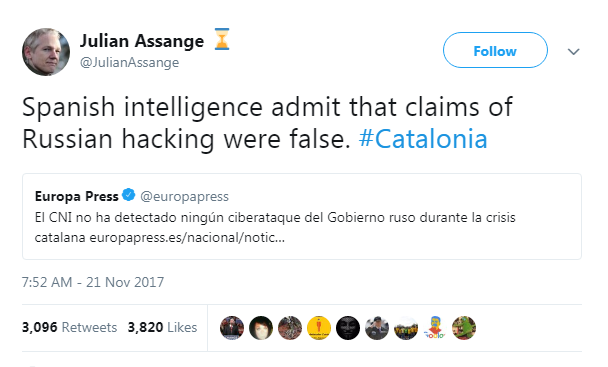 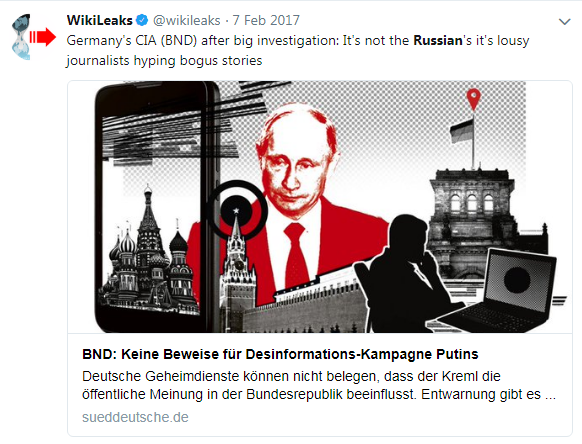 It is all so blatant and consistent that it comes across like they are doing PR work for the Kremlin: 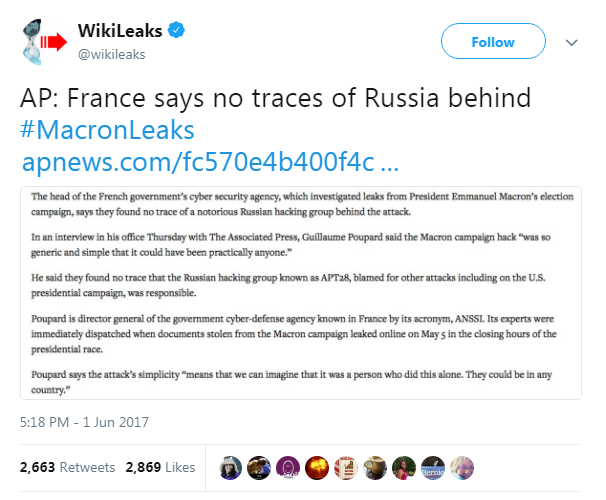 If a piece of news seemingly vindicates Russia, it is almost always posted: 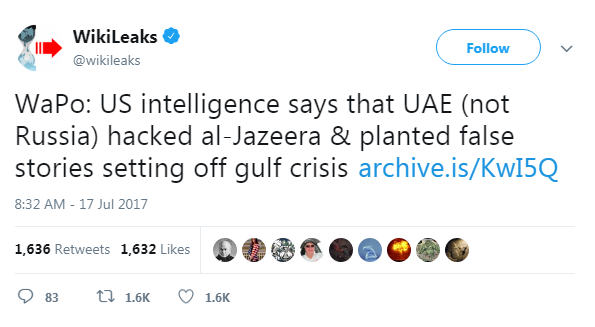 Even Wikileaks humor is biased.

In the tweet below, Wikileaks highlights how the Russian Ministry of Foreign Affairs “trolled” the CIA: 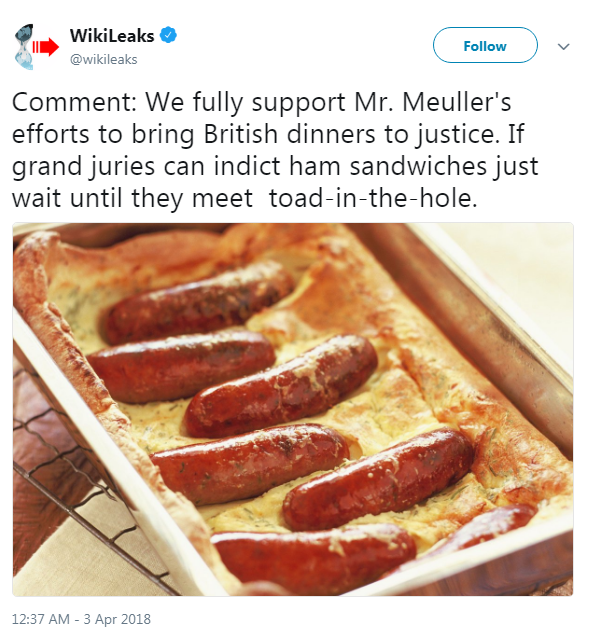 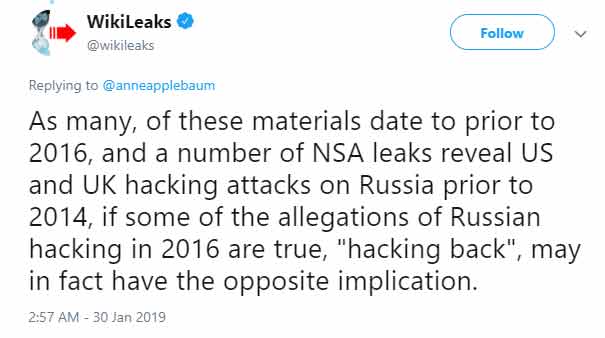 They’re not even trying to hide their bias at this stage.

It’s never Putin, is it Wikileaks?