If there are air bubbles coming out from your toilet, then it is likely that one of your drains is blocked.

This is a sign that trapped air is being forced back up the pipes.

Air bubbles started coming out of my toilet a couple of years ago.

A couple of years ago, air bubbles started coming up from my downstairs toilet.

For a week or two, I had been hearing a strange “bubbling” or “gurgling” sound after showering, and it took me a while to pinpoint where it was coming from.

One day, I finally realized that it was coming from the toilet in my downstairs water closet.

When I first saw the bubbles, I was confused and half-afraid that some creature was suddenly going to float to the top. I even had visions of a rat swimming up my drain pipe.

Sensing that something wasn’t right, I decided to flush it, just to see what would happen.

It wasn’t long before I realized that I was dealing with a blockage.

After I flushed the toilet, the water stuck around, refusing to subside for nearly 10 minutes.

What causes these bubbles?

These air bubbles can occur when the water is unable to drain away fast enough.

When a blockage happens, the pipes begin to fill up with water. As a result, trapped air is forced back up.

In my case, the trapped air found the closest drain, which just so happened to be my downstairs toilet.

These air bubbles are more likely to occur when a large volume of water is being flushed out of your house. For example, a shower, a bath, or a washing machine.

They might not occur if you are just using a faucet or flushing the toilet.

The image below illustrates what might be happening in your case: 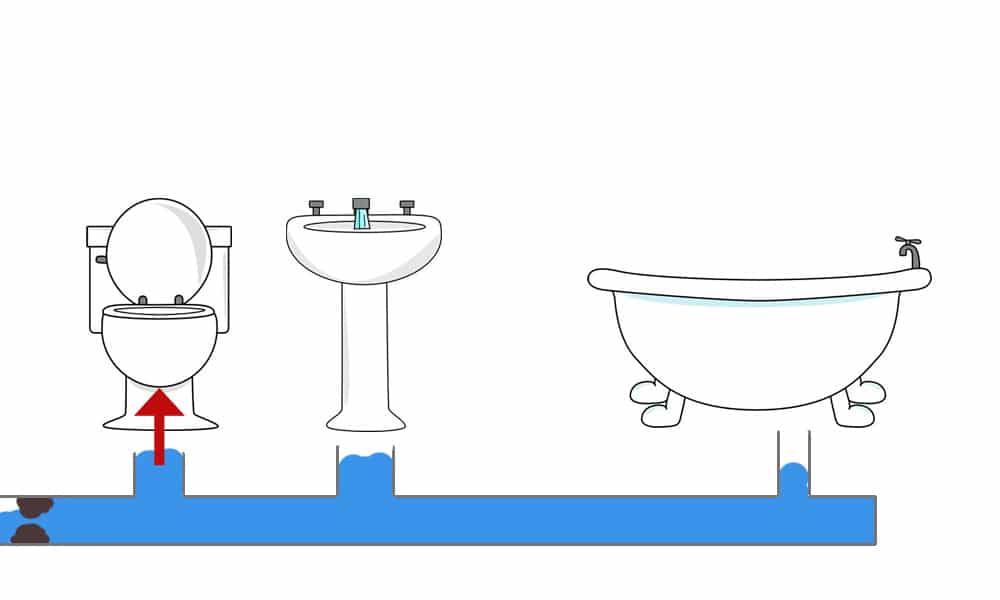 Air bubbles coming up through the toilet because of a blocked drain.

Note that I stress the word “might” because everyone’s drain setup is different and the blockage could be further down the pipes.

Where is the blockage?

In my scenario, the drain at the side of my neighbors’ house was blocked.

It became apparent when water and toilet paper started seeping through the manhole covers in our gardens.

Unfortunately, in some cases, it might not be your fault.

After you’ve had a shower or used the washing machine, check any manholes or drainage outlets on the outside of your house.

In my case, the drain that takes water away from my kitchen was also starting to back up.

Although I poured two bottles of sulfuric acid into the outside drain, it proved to be useless.

I also purchased a “plumber’s snake”, which also did nothing.

When I first started on my little “mission” to unblock the drain, a relative warned me that I’d probably end up calling a plumber.

I spent more than €100 on sulfuric acid, a plumber’s snake and other chemicals before eventually admitting defeat.

In the end, I was forced to call a local plumber who specialized in unblocking drains. Within minutes, they had located the problem.

The plumbers discovered a large blockage of wet wipes and cotton bud sticks at the side of my neighbor’s house.

This mass of wet wipes had blocked the drain pipe leading out to the main sewerage system.

As a result, water and other waste were beginning to pile up behind it.

When the water couldn’t escape quickly enough, it caused air bubbles and water overflows in nearby drain outlets.

If the issue had not been solved sooner, the blockage would have eventually worsened and affected the neighbors on the other side of my house. 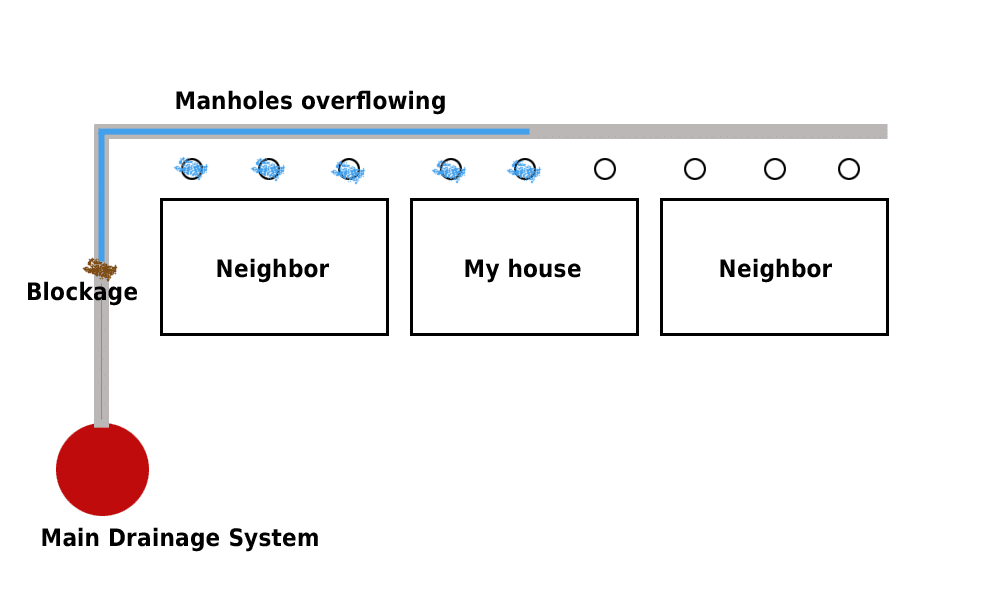 As soon as the blockage on the left was cleared, the water started flowing again.

The illustration above shows why my attempts to unblock failed.

The plumber’s snake would have never reached it, and the sulfuric acid was extremely diluted by the time it reached the blockage.

Lesson learned. Locate the blockage before attempting to do anything.