She was born to Samuel and Eleanor Cowell on September 21st, 1924, in Philadelphia, Pennsylvania.

In 1940, the family lived on West Shawmont Avenue. However, by 1950, they had moved to an old Colonial style house on the corner of Domino Lane and Ridge Avenue. 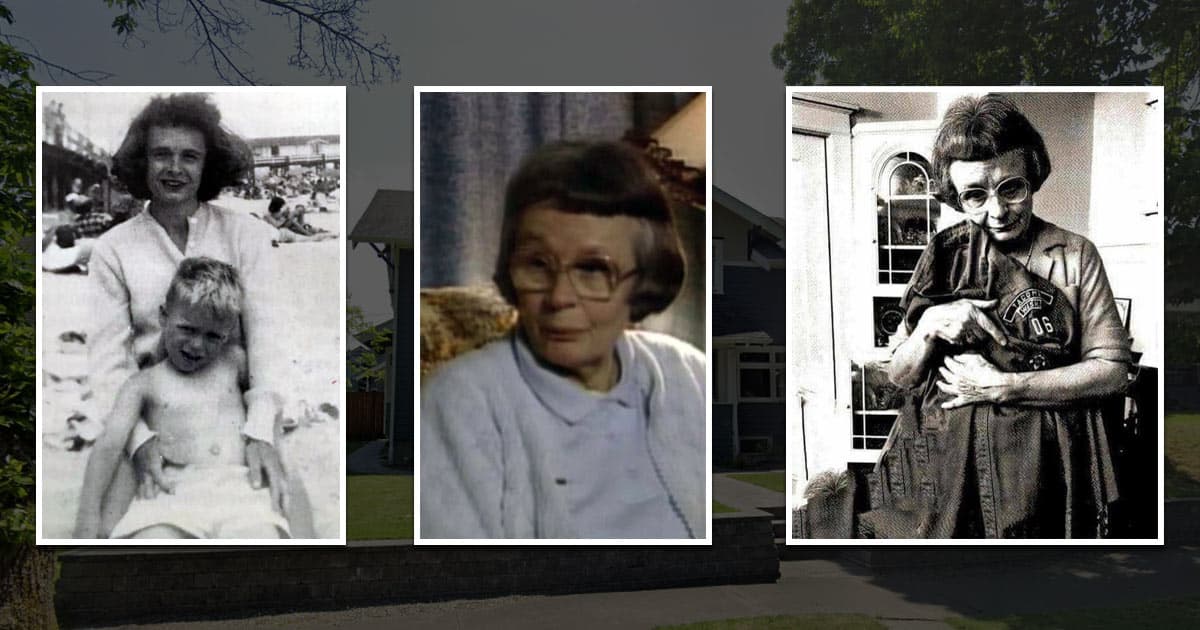 Various photographs of Louise Bundy. The image on the left shows her with Ted.

Louise’s father, Samuel, worked as a gardener. According to old newspaper advertisements, he operated a plant nursery from his home.

Louise became pregnant with Ted in 1946 following a brief love affair with a local man. At the time, she was just 21 years old and fresh out of high school.

Although there has been some debate about who Ted’s biological father was, the general consensus is that he was a man named Jack Worthington.

According to Louise, Jack was a prep-school-educated Navy sailor who had recently returned home from World War II.

Ted Bundy’s biological father didn’t want anything to do with him.

Unfortunately, Jack made it clear that he didn’t want anything to do with his unborn son. At the time, it appears as though he was keen on pursuing another love interest.

Although the family reached out to Jack, he reportedly refused to see his son or provide any financial support.

This left Louise in an extremely awkward position, as the 1940s were anything but kind to single mothers. In those days, people looked down their noses at women who had premarital pregnancies.

There was such a huge social stigma attached to having an illegitimate child that many unwed mothers were convinced that they had to give their babies up for adoption. In their eyes, they didn’t have much of a choice.

Louise Cowell’s case was no exception.

After carrying Ted in her womb for seven months, she traveled to the Elizabeth Lund Home for Unwed Mothers in Burlington, Vermont.

On November 24th, 1946, she gave birth to Theodore Robert Cowell.

Shortly afterward, she returned to her family in Philadelphia by herself, leaving her infant child behind in Vermont.

A few months later, it appears as though Ted’s grandfather, Samuel Cowell, had a change of heart about the situation. At that point, the family opted to take the boy out of the home and bring him back to Philadelphia.

To avoid the “shame” of having an illegitimate child in the household, Samuel and Eleanor decided to raise Ted as their own.

Notably, in the 1950 US Census, Ted is listed as being Samuel and Eleanor’s son instead of their grandson.

A number of reports suggest that the Cowell household wasn’t a happy one. Samuel was an abusive bully who exhibited cruelty towards animals, and Eleanor suffered from manic depression.

By 1950, Louise was eager to take Ted away from Philadelphia and get a fresh start somewhere else. Shortly before Ted’s fourth birthday, she decided to move to her uncle’s house in Tacoma, Washington, which was on the other side of the country.

Before moving to the west coast, Louise changed her and Ted’s surname to Nelson. By doing so, she was able to hide the fact that her son was illegitimate.

If anyone asked, she could tell them that she was a widow. Because Tacoma was more than 2,000 miles away from her hometown, her new friends and neighbors would be none the wiser. 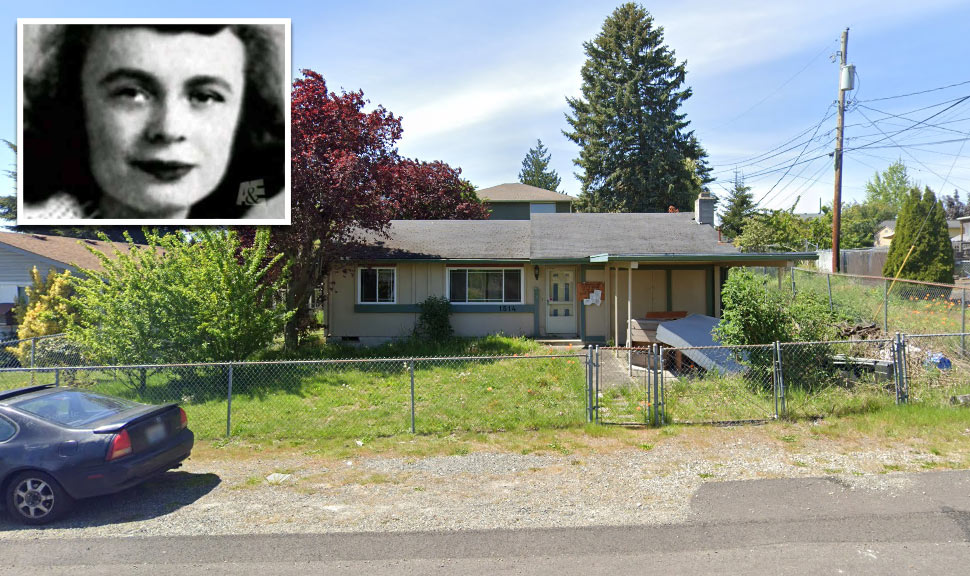 Louise and Ted “Nelson” moved into this house on South Alder Street in 1950.

Evidently, their relationship moved fast, and by May of 1951, they were exchanging vows.

After the couple had tied the knot, Johnnie adopted Ted as his own son. From that point on, Ted became known as Ted Bundy.

Interestingly, this means that Ted had three different surnames before he reached the age of five: Cowell, Nelson, and Bundy.

In 1953, the Bundy family sold their house and moved to 658 North Skyline Drive, which became their home for the next 13 years.

Following the move, the couple had three more children: Glen, Sandra, and Richard.

She believed in his innocence up until the end.

In August of 1975, Ted Bundy was charged with the kidnapping of a 19-year-old woman called Carol DaRonch. By that stage, he had brutally murdered at least 18 women across the states of Washington, Utah, Idaho, and Colorado.

Louise and Johnnie refused to believe that their son was capable of such crimes. Believing that he was innocent, they paid for his bail and flew out to Salt Lake City to support him during the trial.

“One time when he was visiting, Ted mentioned that Sandra’s hair was long and dark, similar to the hair of the victims. Our daughter was going out that night, and Ted said ‘Mom, I hope you know where she’s going and who she’s with.'”

Following the abduction of Janice Ott and Denise Naslund at Lake Sammamish State Park, the police released a description of the suspect—a long-haired man who introduced himself as “Ted” and drove a Volkswagen Bug.

Although Louise thought of her son when she read the report, she still didn’t believe that he was capable of committing such a monstrous act.

“We have complete faith in our son. I had no idea any of these investigations were being made, and the arrest… all of this… is a complete shock.”

Louise continued to stand by Ted even after he was convicted of murder and sentenced to death. Her unwavering belief in her son’s innocence was strengthened by his refusal to admit to his crimes. For the better part of a decade, he insisted that the authorities had convicted the wrong guy.

However, all of this changed in January of 1989, when Bundy’s death row appeals ran dry. Upon realizing that he had finally run out of options, he decided to confess to his crimes. By providing details about his missing victims, he hoped that everyone would see the importance of keeping him alive.

In the end, this last-ditch effort failed, as the families of the victims had grown tired of his delaying tactics. They believed that the time had finally come for Ted Bundy to meet Old Sparky.

The authorities felt the same way.

Ted’s biggest confession came three days before his execution, when he called his mother from prison and admitted his guilt to her.

If Louise Bundy did have any doubts about her son’s innocence, they were evidently shoved to the back of her mind and purposely crowded out by fond memories of him as a boy.

Despite hearing the truth, she now had to reconcile the fact that the child she raised had grown up to be a monster—a man who had brutally raped and murdered 30 young girls in five different states.

To make matters even more complicated, this was one of the last times that she would speak to her son, as he was just days away from being strapped into an electric chair and executed.

In the dying moments of their final phone call, Louise told Ted that he would always be her precious son.

Louise and Johnnie Bundy retreated from the public eye.

In the aftermath of Ted’s execution, Louise claimed that there was nothing in his background that would have triggered such behavior:

“There’s nothing in his background that can tell us what triggered all of this. In fact, up until Saturday, I didn’t believe any of it.”

She also explained why she didn’t attend his execution:

“It’s a three-ring circus, and we didn’t feel the agony we would go through by going down there would compensate for a few minutes of talking to Ted through glass. And he also felt that way too.”

After Ted’s death, Louise and Johnnie Bundy decided to lay low and avoid the media, hoping to regain some sort of normalcy for themselves and their other children.

For the next two decades, they remained in Tacoma, despite the unpleasant looks that they sometimes got from members of the public.

On December 23rd, 2012, Louise Bundy passed away following a long illness. She was 88 years old.