Earlier this year, a Claire Byrne Live/Amárach Research poll found that 89% of people do not believe Sinn Fein leader Gerry Adams when he says that he was never a member of the IRA.

Why do so many people think he is lying?

There are multiple photographs of Adams attending IRA funerals. In some of the older photographs, you can see Gerry Adams wearing a military uniform and a beret. 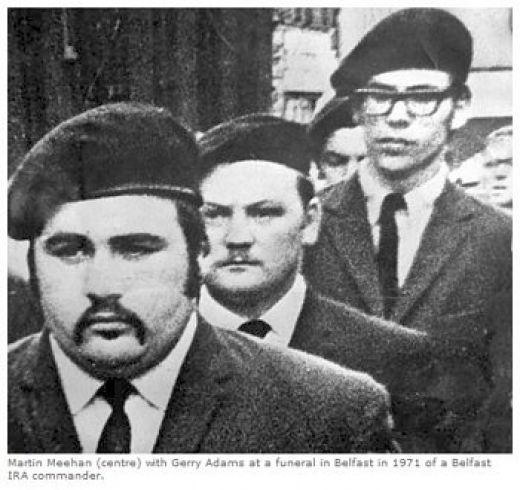 A photograph of Gerry Adams. This was taken in 1971, at the funeral of a Belfast IRA commander. The man in front of him is Martin Meehan. Meehan was the first person to be convicted of being a member of the IRA.

In 2010, Dolours Price made the claim that Gerry Adams was her “Commanding Officer” in the IRA. Price also claimed that she had played a role in the murder of Jean McConville.

According to Price, Adams ordered McConville’s killing because she was a British informer.

However, Adams denies these claims.

It is also worth noting, for the sake of balance and clarity, that Ms. Price has been critical of Gerry Adams and the Good Friday Agreement, as well as the leadership of Sinn Fein.

Because of Price’s stance on Adams, we cannot be 100% sure that she wasn’t attempting to settle old scores.

In 1980, IRA man Peter Rogers was sentenced to life in prison for the murder of Garda Seamus Quaid in County Wexford. Rogers opened fire on Garda Quaid and his colleague, Garda Donal Lyttleton, when they attempted to search his van, which he had been using to transport liquid explosives.

In 2013, Rogers told the Sunday Independent that he had been given the task of transporting the explosives into the UK. He also stated that both Gerry Adams and Martin McGuinness had ordered him to do so.

Rogers did not move the explosives because of fears that they were unstable.

As a result, Adams and McGuinness summoned him to a meeting in Dublin. There, they questioned him about the delay, before eventually ordering him to move the explosives, despite their condition.

According to Rogers, Adams’ response was as follows.

“Look Peter, we can’t replace that explosive. You will have to go with what you have, and as soon as you can get it across, the better.”

“Why hasn’t he taken legal action against anyone?”

Many people point to the fact that Adams has never sued anyone.

Dozens of historians, former IRA members, politicians, and journalists have stated that Adams was in the IRA.

Despite this, he has never threatened legal action against any of them.

The argument here is as follows:

“If he wasn’t a member of the IRA, then why hasn’t he sued anyone for defamation? Is he afraid of the evidence that might emerge in such a case? Does he believe that the court will rule against him?”

The counter-argument to this is:

“Adams’ choice not to sue people is not evidence that he was in the IRA.”

In 1998, former IRA member Sean O’Callaghan told the High Court that he attended an IRA Revolutionary Council meeting back in 1983, and that Adams was present, along with Thomas “Slab” Murphy, Pat Doherty and Martin McGuinness.

Sinn Fein denies O’Callaghan’s account, claiming that he exaggerated his position within the organization.

2013 saw the release of an interview with former IRA member Brendan Hughes.

Hughes agreed to give an “oral history” about his role in the Troubles, provided the recordings remained sealed until after his death.

During the Troubles, Hughes was a member of the IRA’s Belfast brigade. He was also the main organiser behind the Provisional IRA bombings on “Bloody Friday”.

In his account, Hughes stated that Gerry Adams had ordered the murder of Jean McConville. He also said that Adams was the commander of the IRA’s Belfast brigade and that he had controlled a squad called “the unknowns”.

“There is only one man who gave the order for that woman to be executed. That man is now the head of Sinn Féin.”

Former republican Evelyn Gilroy claims that Gerry Adams was the only person in a position to order the murder of Jean McConville.

During the Troubles, Gilroy was active in the Divis area of Belfast. This is where McConville lived.

Former Garda Detective Superintendent PJ Browne claimed that Gerry Adams was the leader of a “psychotic” IRA unit in Belfast in the early 1970s.

Hunger striker Bobby Sands did a similar thing, choosing to write under the name “Marcella”.

Adams was an inmate in Long Kesh when he penned the articles in question.

Brownie was an IRA volunteer.

In a number of articles, “Brownie” admitted his role in the IRA.

Adams has since claimed that “Brownie” was a pen name that a number of different prisoners used. A “corporate entity”, so to speak.

However, in the book, “Man of War, Man of Peace,” it states that the “Brownie articles are clearly the work of an individual rather than a committee.”

It is also noted that there was a sense of amusement amongst republicans when Adams claimed that the articles admitting IRA membership were all written by people other than himself.

It is also worth mentioning that Brendan McFarlane, who was the IRA’s Officer Commanding inside the Maze prison, addressed Adams as “Brownie” in smuggled letters during the hunger strikes of 1981.

A fellow prisoner under the pen name “Solon”, also gave a physical description of “Brownie”:

“For those of you who don’t know, Brownie is a lanky, thin bearded, boggin’ excuse for a person with gold rimmed glasses and is oft times to be seen, pipe in mouth, fumbling over cheese sandwiches.”

In 1972, Secretary of State for Northern Ireland, William Whitelaw, met with the Provisional IRA.

In his memoirs, he writes:

“My Minister of State, Paul Channon, and I met leaders of the Provisional IRA at his house in London on 7 July.”

On the other side of the negotiating table was Sean Mac Stiofáin, who was the Chief of Staff of the Provisional IRA at the time.

In his book, “Memoirs of a Revolutionary”, Mac Stiofáin wrote the following:

“The time now came to pick our team of representatives for the crucial London meeting with Whitelaw. At this stage, it was the military situation that would be the main British preoccupation, and they would scarcely be interested in talking to any Republicans just yet apart from representatives of the military wing. Therefore I rejected a suggestion that our team should include a leading member of Sinn Fein.”

“It was decided that Dave O’Connell and I would represent the national leadership, together with Séamus Twomey. Also from Belfast there would be Gerry Adams and Ivor Bell. Martin McGuinness was to represent Derry.”

Why was Gerry Adams at a meeting that did not include any Sinn Fein members?

This was a meeting between Whitelaw and the Provisional IRA.

Sean Mac Stiofáin makes it clear that he didn’t want Sinn Fein members at the negotiations.

If this is the case, then why was Gerry Adams at the meeting?

Why was he in attendance along with other IRA members?

For Belfast, he names “Gerry Adams and Ivor Bell”. We know that Ivor Bell was a local commander in the Provisional IRA’s Belfast Brigade.

This begs the question: What was Gerry Adams’ role?

In February of 2005, Minister for Justice, Michael McDowell, publicly named some of the members of the IRA Army Council.

According to McDowell, Sinn Fein TD Martin Ferris, Gerry Adams and Martin McGuinness were all members of the IRA Army Council.

A couple of months later, McDowell expressed his belief that Adams, McGuinness and Ferris had all recently vacated their positions on the council.

Three months after McDowell’s statement, The Sunday Times newspaper reported that the IRA’s General Army Convention had been held.

The article stated the following:

In July of 2005, The Sunday Times reported that Adams was replaced by Brian Arthurs, a former commander of the Provisional IRA’s East Tyrone Brigade.

Ed Moloney is an Irish journalist who frequently covered the Troubles in Northern Ireland. He also wrote the best-selling book “The IRA – A Secret History”.

According to Moloney, Gerry Adams would not have been able to turn the republican movement in a political direction unless he was a member of the IRA’s ruling body.

He also claims that Adams was the commander of the IRA’s Belfast Brigade during Jean McConville’s kidnapping.

Adams denied any involvement in McConville’s murder. He also claimed that he was in prison at the time.

However, this is untrue.

According to a number of journalists (Moloney, Patrick Bishop, Eamonn Mallie, etc.), Gerry Adams was the Provisional IRA’s Chief of Staff between the 3rd of December 1977 and the 18th of February, 1978.

Afterwards, Martin McGuinness took over the role until 1982.

In 2017, declassified files showed that Gerry Adams’ parish priest, Fr. Peter Forde, told Irish official David Donoghue that Adams was “at most No 3” on the IRA army council.

Des Long is a former IRA member who split from the organisation in 1986. His decision to leave came after the party had ended its abstentionist policy in Dáil Éireann.

In September of 2019, Long made the claim that Gerry Adams sat opposite him at IRA council meetings.

According to Long, Adams was the chairman of the council.