The average height of a famous actress is about 1.65 meters or 164.9 cm. This also happens to be the median height.

In order to calculate this figure, we compiled a list of 137 mainstream actresses. These are women who are famous for their roles in Hollywood movies and popular TV shows.

The shortest actress in our database was Judy Garland, who was just over 4 ft 11. The tallest were Lana Clarkson and Sigourney Weaver, both of whom have a registered height of 6 ft.

Do you have to be tall to be a famous actress?

No, not necessarily. Although the average American woman is one inch shorter than the average famous actress (5 ft 3), the difference isn’t that much.

Furthermore, 43 of them were actually smaller than the average American female.

Hollywood star Winona Ryder is the closest to the average American female. She is 1.61 m in height.

Whoopi Goldberg, on the other hand, is the height of an average famous actress. She is the median, so to speak. 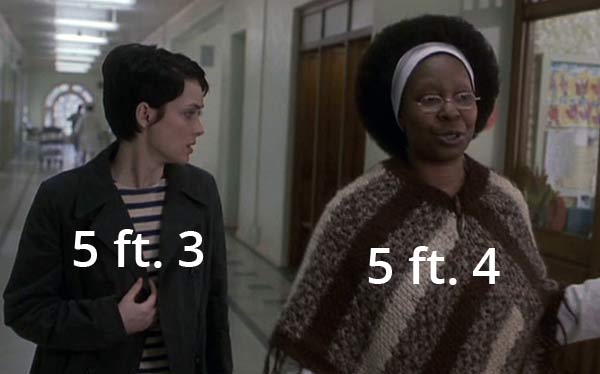 A photograph of the two.

Although the photograph above isn’t a perfect comparison, it does highlight the fact that there isn’t much of a difference between 5 ft 3 and 5 ft 4.

In the case above, Whoopi is closer to the camera and her hairstyle is making her look slightly taller than she really is. However, you can still see that the difference in height between the two is pretty minuscule.

Here are a few examples of famous actresses who are pretty short.

Then, there are a few actresses who are relatively tall.

In this case, it seems as though the tallest “famous” actress is Sigourney Weaver.