In this guide, we will look at some of the methods people use to kill and remove Ivy.

As you probably already know, English Ivy can be a tough weed to remove.

Its thick roots can embed themselves into the ground. It also likes to climb up the sides of buildings and trees.

Although Ivy can look like a beautiful adornment, the fact that it can penetrate cracks and cause structural damage means that you might find yourself in a situation where you need to get rid of it.

How to kill Ivy with salt water.

One trick involves killing the Ivy with salt water.

The idea here is to force the freshly-cut Ivy vines to consume our salt water mixture. The salt can dehydrate the Ivy and disrupt its internal water balance.

Below is a photograph of the duct tape cup, just in case you are having a hard time visualizing it. 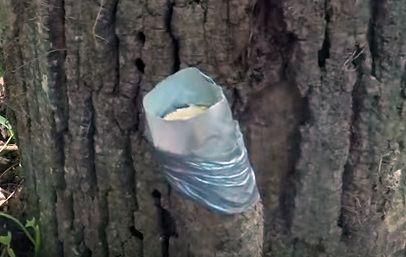 The best thing about this method is that it allows us to carefully kill the Ivy without negatively impacting its surroundings.

Dig out the ground roots.

You can also kill Ivy by simply digging up its roots and dragging it down off the wall. A lot of people do not like this approach because it can involve a lot of hard work, especially if the roots are thick and deeply embedded.

If killing the Ivy is not your main goal, you could cut the stems that are just above the ground and then tear the vines down. Note that the Ivy will probably grow back at some stage in the future if it is left alone.

Be careful about where you throw the pieces of Ivy that you take down, as viable stems and roots may sprout and regrow in places that you do not want them to.

You should also exercise caution when tearing down the Ivy. If it hasn’t died off, you could end up damaging whatever it has latched onto.

Inject the Ivy with a syringe of salt water or weedkiller.

Another method involves injecting salt water or Roundup weedkiller directly into the stems using a syringe. The best place to do this is nearest to the ground, where you are closer to the roots.

You may want to drill a downwards-pointing hole into the stem so you can inject or pour whatever mixture you’re using directly into the Ivy. To make sure that the liquid remains in place, you can wrap the hole with duct tape.

Spraying the leaves with weedkiller.

You can also spray the Ivy with vast amounts of weedkiller such as Roundup. In these cases, they used far more than the recommended amount. Note that Ivy leaves have a waxy layer and that the weedkiller may trickle off them.

You could damage this waxy layer by striking the Ivy with a bundle of willow sticks. This might make it easier for the weedkiller to penetrate the leaves.

To make the weedkiller stick better, you should mix it with Dijon mustard and some vegetable oil. A recipe that was used by a stone mason:

Others have reported success by mixing Roundup weedkiller with some lemon washing up liquid and then spraying it onto the leaves.

Instead of spraying the leaves, you can also cut the vines that are closest to the ground and then spray them with weedkiller. If you do this, try to leave about 3-4 feet of a safe zone between the vines and the Ivy that is growing overhead.

Spraying weedkiller can be dangerous to the plants and trees that surround the Ivy, so this might not be the best solution for everybody.

How to kill Ivy with vinegar and salt.

If you’re looking for a homemade solution, you can try mixing the following into a sprayer:

Mix those three ingredients and then spray the mixture onto the leaves of the Ivy. Note that it should be mixed until the salt is completely dissolved. The salt and the acetic acid in the vinegar will draw the moisture out of the leaf, whereas the washing up liquid will act as an emulsifier that helps the liquid stick to the leaf.

Note: This homemade solution will kill other types of plants and weeds as well, so do not be indiscriminate while spraying it.

Killing Ivy that is growing on a tree.

If the Ivy is growing up the side of a tree, then you will need to be extra careful with your weedkiller.