Charles Manson was a cult leader and a murderer. He was violent, remorseless and delusional.

However, he was not a serial killer.

Media publications and documentaries will often describe Manson as being a serial killer. They do this because the label catches people’s attention.

In other words, it sells.

Unfortunately, by using this label, they are misleading their audiences.

Manson did not physically kill anyone himself.

The problem with labeling Manson as a serial killer is that he never physically killed anyone himself. Instead, he instructed his cult members to do the job.

Furthermore, Manson was absent while many of the “Manson Family” murders were taking place.

In fact, he deliberately made sure that he was not at the scene of the crime whenever a murder was due to occur. 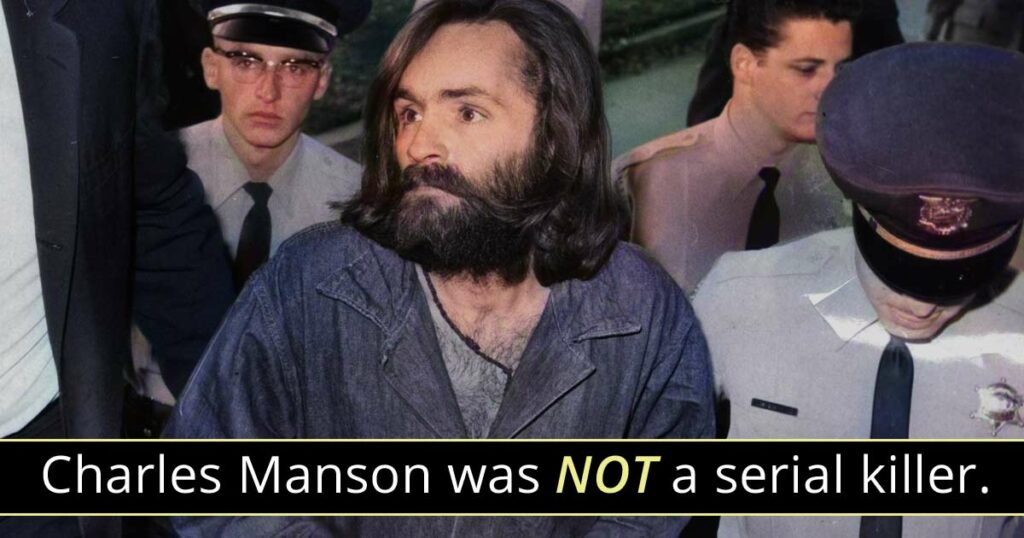 A photograph of Manson during his trial.

For example, during the Tate-LaBianca murders in August of 1969, Manson left both scenes before the slayings started.

He also made sure that he was not present for the murder of music teacher Gary Hinman. Although Manson did cut off a piece of Hinman’s ear, he left the house three days before the actual killing took place.

The murder only occurred after Manson told Bobby Beausoleil over the phone that he should kill Hinman.

Charles Manson was not a serial killer.

Serial killers like to be physically involved in the act. They fantasize about inflicting pain and suffering on others. This is what drives them to commit their crimes.

They do not “sit on the sidelines” because that would defeat the point.

They need to be physically involved in the act because that is what gets them off.

That is their fantasy.

Manson, on the other hand, completely avoided taking anyone’s life.

Not only did he refuse to get his own hands dirty, he also made sure that he did personally not see any of the killings taking place.

This is not the behavior of a serial killer.

Manson was a violent cult leader who instructed his followers to commit heinous crimes. That is true.

However, he does not fit the profile of a serial killer. Therefore, labeling him as such is misleading.