If you’ve ever owned a houseplant, then it is likely that you’ve come across white mold growing on top of the potting soil.

This white, fuzzy “mold” is actually a fungus.

Although its presence can indicate a problem with watering, it does not necessarily mean that the plant itself is sick or that it is going to die.

Basically, don’t panic about it. 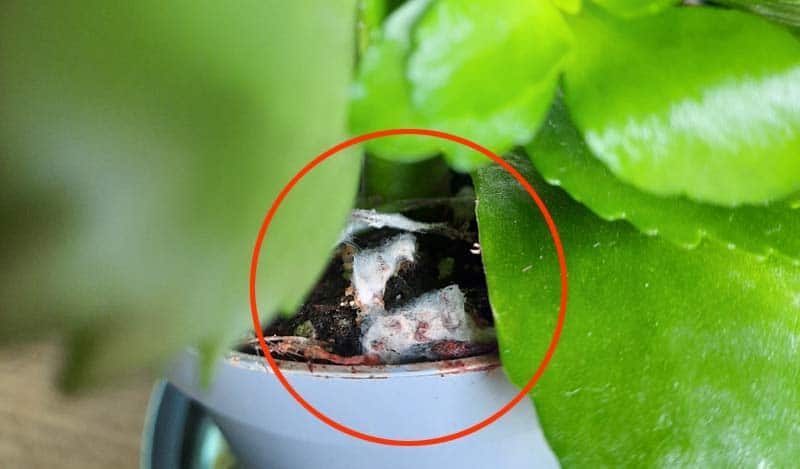 This photograph shows a white mold-like substance growing on the soil of a house plant.

Although this fungus is harmless to humans, its presence does tell us that there could be a problem with the soil.

Furthermore, it can be unsightly. Nobody wants to look at a carpet of white fuzz growing across the soil of their beautiful house plant.

This is due to the fact that most of us have a natural aversion to mold. When we see it, we think of things like spoiled food and dampness, both of which can harm us.

What is causing this white mold to grow on my plant?

This white mold / fungus will typically appear if you have been over-watering the plant. Over-watering can lead to soil that is waterlogged. This creates the perfect environment for fungus to thrive in.

If you feel as though you haven’t been over-watering the plant, then it is possible that the pot or basket does not have sufficient drainage.

In a previous article, we wrote about mushrooms appearing on lawns. In that article, we pointed out that fungus will appear when there is organic matter for it to feed on. The exact same thing is happening in this case.

The saprophytic fungi that appear on houseplants like to feed on dead plant matter. For example, a dead leaf that has become embedded in the soil.

Another thing that people forget is that houseplants tend to get a lot of shade. And if there’s one thing that we know about fungus, it’s that it loves shade.

To sum it up, fungus can appear when you combine waterlogged soil with decaying organic matter.

Once you put these two together, you have created the perfect recipe for “white fuzz”.

How to remove white mold on soil.

Although you can simply scrape this mold off the top of your soil, you will probably want to address the reason why it is there in the first place.

You should start off by reducing the amount of water that you are giving the plant. In the past, I’ve gotten rid of this fungus by simply watering the plant less.

After a couple of weeks, the white fuzz simply disappeared.

If your pot or basket does not have enough drainage for water to escape, then you might want to drill some holes into the bottom of it.

If your pot already has holes, then you will need to make sure that these holes haven’t been blocked. Over time, soil can become so compacted that water finds it difficult to percolate through it.

One technique to help improve drainage is to place rocks or small stones at the bottom of the pot. This can help excess water to escape.

If your flower pot is inside of a much larger pot, then you should periodically check to make sure that water hasn’t been pooling at the end of it.

Although sprinkling cinnamon on top of the soil may help to dry it out, it does not address the underlying issue.

As a result, it is likely that the fungus will reappear at some point.

Replace the soil in your pot.

If the soil in your pot is old, then it might be a good idea to replace it with fresher soil. This will not only remove the fungus, but it will also help to reduce the amount of decaying plant matter that is in the pot.

Be cautious about which soil you choose for your flower pots.

Soil from your garden might seem like a great idea because it is free. However, it will probably contain a lot of contaminants for fungus to feed on.

Instead, you should take a trip to your local garden center and buy some quality potting soil.

Will the white mold harm my plant?

No, the fungus that grows on plant soil will not harm your plant.

When soil is excessively damp, it can cause a plant disease called root rot. Root rot can be lethal and can kill a plant in less than two weeks.

Therefore, white fuzz growing on your house plants should be taken as a sign that the conditions for root rot are present and that the water issue must be addressed.