However, on social media, the word is often used as a term of endearment.

Why do so many people on TikTok use the word Bestie?

On apps such as TikTok and Twitter, users are far more liberal with the word “bestie”.

Basically, people on these apps will refer to each other as “bestie” even if they are complete strangers.

On TikTok, it has basically become a trend to use the word. And in most cases, there is no real meaning behind it. It is just a greeting or a nice way to start a comment.

In other words, it is a term of endearment. Just like the words “honey”, “mate” or “darling”.

“Bestie, I love your dress!”

In this case, there is no hidden meaning or anything. The person is using the word because they believe that it sounds friendly and supportive.

Unfortunately, like many trends, it has become a bit overused. As a result, it isn’t uncommon to come across entire comment sections that have been flooded with the word. 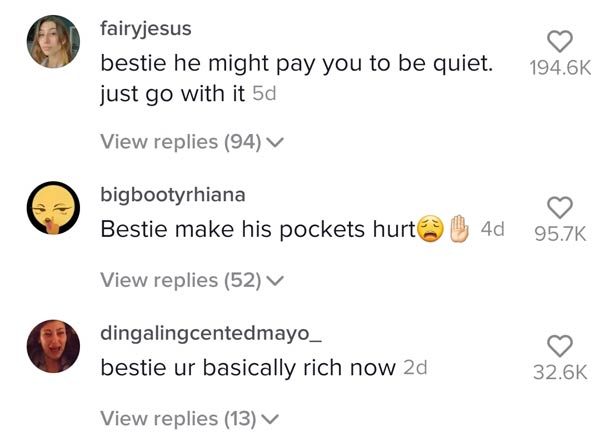 A comment section on TikTok. In this case, these users are being supportive because a pregnant woman caught her husband cheating.

Although most people use “bestie” in a friendly manner, some will use it sarcastically.

As you can see, “bestie” is kind of like the word “honey”. Although they are both terms of endearment, they can still be used in a snarky fashion.

This is basically the same thing as saying “Honey, some things are better left unsaid.”

How did the word become so popular on TikTok?

Although the word has been around for a while, it only “took off” in its current form in 2021.

In January 2021, a TikTok user called tiktoshh uploaded a video in which she repeatedly shouted the phrase “Bestie vibes only!” into the camera.

The video went viral and subsequently, TikTok users started to use the sound in their own videos.

Roughly one week later, tiktoshh uploaded another video in which she started off by saying:

For example, one user uploaded the sound with the following caption.

“Me when my boyfriend and I have just started the movie and I’m already on my 10th question.”

As these sounds became more and more popular, people on TikTok began to use the word “bestie” as a term of endearment. From there on in, it started to “snowball” and take off in popularity.

By the end of February, 2021, the phrase had “taken hold” and become a trend.

Whether or not this fad actually “sticks” and cements itself as an Internet slang phrase remains to be seen. However, I personally doubt that it is going to disappear any time soon.