Data shows that the “worst” serial killers were born between the 1930s and the 1960s. This number peaked in the 1940s and 1950s before steadily decreasing in the decades that followed.

We compiled a list of 179 serial killers from 31 different countries. Furthermore, these were the worst killers that we could find. Between them, these people took the lives of at least 3,065 victims.

Although the list contains familiar names such as Gary Ridgway, Ted Bundy and John Wayne Gacy, we also made sure to include lesser-known serial killers such as Vladimir Kuzmin, Joseph Naso, Gao Chengyong and Rodney Alcala.

Which decade were the most serial killers born in?

Take a look at the following graph. 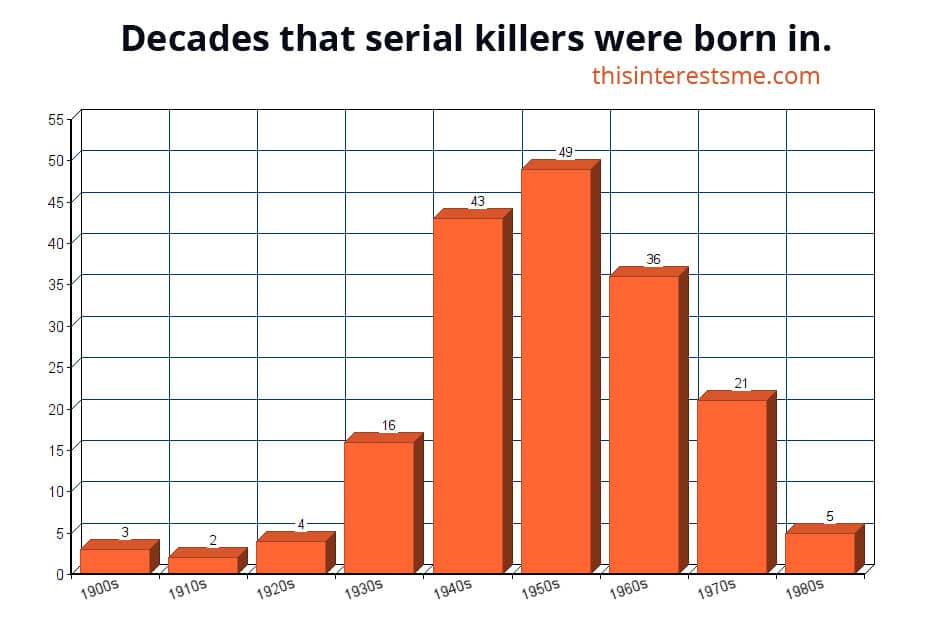 A bar chart showing which decades most serial killers were born in.

As you can see, these births peaked in the 1950s before continuing to fall.

In addition to this, this list did not contain any serial killers that were born in the 1990s. The youngest that we could find was Alexander Bychkov, who was born on April 1st, 1988. Bychkov was convicted of the murders of nine men in Russia in 2013. He carried out his first murder in 2009, when he was just 21 years old.

As you can see, many of these murderers grew up in the aftermath of World War 2. In the past, it has been suggested that society in the post-war period was more violent due to PTSD, etc.

However, the reason for this decline in serial killers is a bit more complex than that.

All in all, there are a myriad of reasons why serial killers have declined over the years.

Which decade were the most American serial killers born in?

Most American serial killers were born in the 1940s and 1950s. In fact, these two decades are “tied”, so to speak. 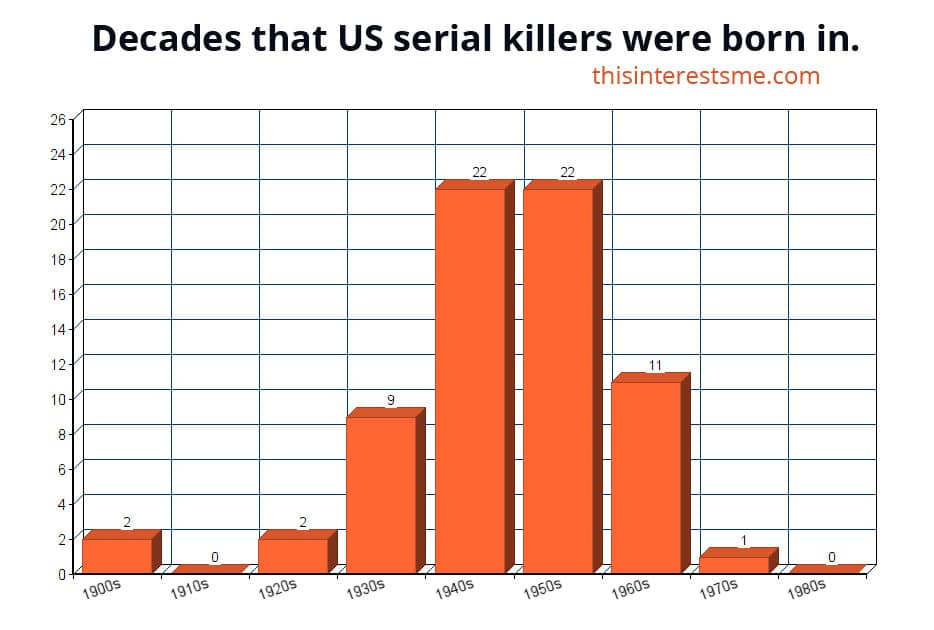 A bar chart showing which decades American serial killers were born in.

Here, you can see that there was an even steeper fall in the birth of serial killers after the 1950s. In addition to this, only 1 of the 69 US-born murderers on our list were born after the 1960s.

Most common year for the birth of serial killers.

Which generation has the most serial killers? Boomers, Gen X or the Silent Generation?

In the USA, each demographic cohort has its own name. For example, anyone born between 1945 and 1964 is considered to be a “Baby Boomer”. On the other hand, “Millennials” are people who were born between 1980 and 1994.

For fun, we decided to split our list up into their relevant generations. Note that we excluded Jake Bird and Nannie Doss as they were both born before 1928.

Here, you can see that the Baby Boomer generation makes up the vast majority of our US serial killers. That is a whopping 62.32%. On the contrary, Millennials do not even appear on the list.

Here are some other related articles that you may find interesting.