In the past, documentaries and movies have often portrayed serial killer Ted Bundy as some sort of evil genius. However, this was not the case at all. Such portrayals are usually sensationalist nonsense which barely scrape the surface. 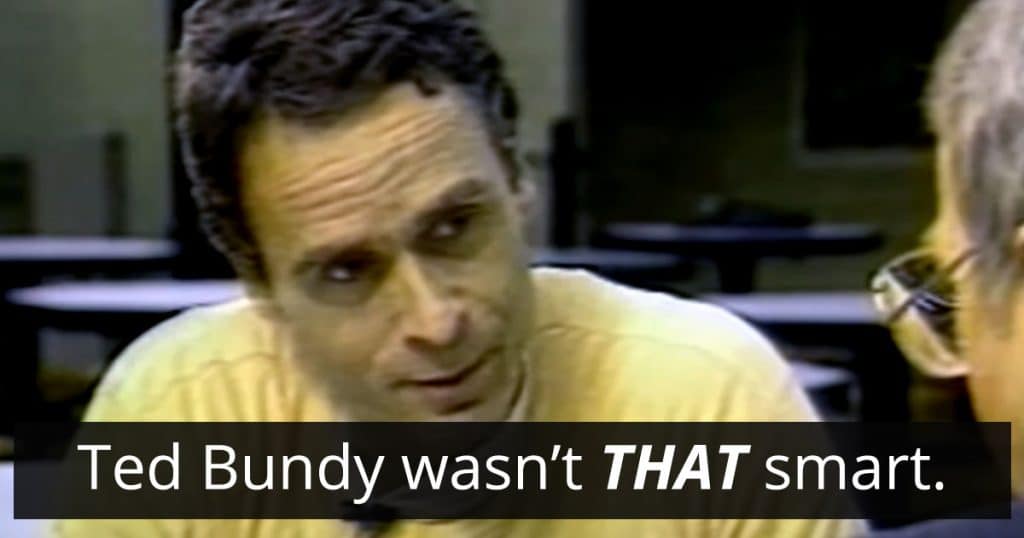 Let’s cut through the sensationalism that surrounds Bundy and take a look at the facts.

What was Ted Bundy’s IQ?

According to Ann Rule in the book “The Stranger Beside Me”, Ted Bundy’s IQ was 124. He scored this result on the standard Wechsler-Bellevue test.

This means that Bundy’s intelligence was slightly above average. In other words, he was bright, but he certainly wasn’t a genius.

Although other websites state that Bundy had an IQ of 136, none of them list their sources. All in all, it seems as though someone plucked that figure out of thin air.

The thing about Bundy is that he had good verbal skills. In other words, he was well-spoken. This inflated people’s perceptions of his intelligence.

However, a person with an average IQ can easily improve their communication skills if they practice enough.

If Bundy wasn’t smart, then how did he get away with his crimes for so long?

Firstly, he did not get away with his crimes. In 1975, police charged Bundy with the kidnapping of Carol DaRonch. In 1976, he was found guilty of the crime. However, detectives also suspected his involvement in multiple murders and disappearances. In other words, they were convinced that they had the right man. There just wasn’t enough evidence to charge him at the time.

Secondly, Bundy’s murders took place across seven states. Unfortunately, law enforcement was far more disorganized back then. Information sharing between precincts and police departments was convoluted and slow-moving. Especially across state lines. Back then, there were no emails or central databases. Furthermore, the FBI’s ViCAP program did not exist. At that time, the FBI was only beginning to involve itself with serial murderers.

Thirdly, police incompetence gave Bundy a number of lifelines. This incompetence allowed him to escape twice. Furthermore, on more than one occasion, detectives ignored tip-offs about him.

Last but not least, forensic science in the 1970s was primitive in comparison to today’s standards. For example, DNA analysis did not exist.

All of these things provided the perfect conditions for Bundy to slip through the cracks.

Had Bundy started his crime spree in a later decade, it is almost certain that he would have been caught much sooner. Instead of becoming the infamous murderer that we know him as today, his name would have merely become another entry in a long list of serial killers. A list of names that most people don’t recognize.

He was an average law student with mediocre LSAT scores.

Certain people point to Bundy’s experience as a law student as some sort of indicator that he was extremely smart. However, this does not hold up to scrutiny.

Firstly, you do not need to be a genius in order to become a law student. Secondly, Bundy did not go to Harvard, Stanford, Columbia, Yale or any of the top law schools. Furthermore, his acceptance into the University of Utah happened despite his “mediocre” LSAT scores, which he personally felt embarrassed by.

In addition, there is no evidence to suggest that Bundy was a good law student. In fact, most reports seem to suggest that he was an average student at best. Ultimately, his efforts to become a lawyer ended in failure, as he began to skip classes and fail exams. After that, he simply stopped showing up.

To sum it up, Bundy was an average student who got into law school despite his poor LSAT scores and then dropped out. There was nothing remarkable about his foray into the world of law.

Ted Bundy’s crimes were careless. They were not the acts of a genius with a high IQ.

Regardless of what Ted Bundy’s IQ was, his crimes were impulsive and sloppy.

If you dive into the details of Bundy’s murders, you will begin to see that many of his attacks were careless on his part.

These were impulsive crimes that lacked foresight.

They were not the acts of some genius serial killer who put a lot of effort and premeditation into his murders. In reality, many of Bundy’s attacks were so risky on his part that he was extremely lucky to escape justice for as long as he did.

For example, Bundy abducted two women from a crowded beach at Lake Sammamish State Park in one day.

He did this in broad daylight. As a result, multiple witnesses were able to describe him. Three people watched him leave with one of the victims. 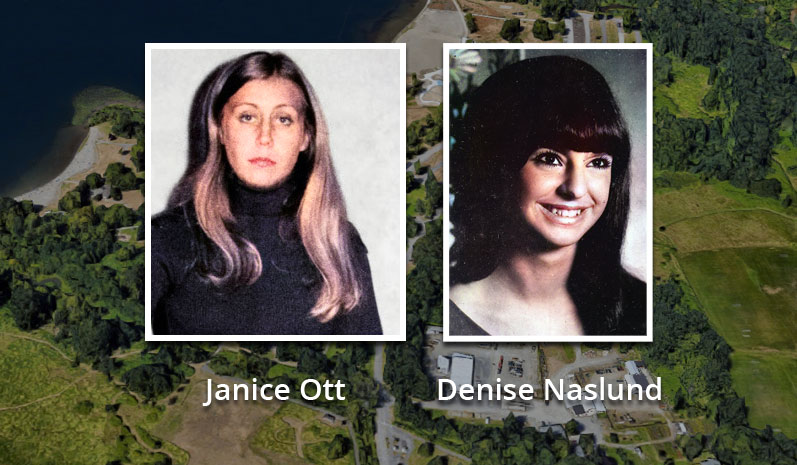 He even introduced himself to women using his real name.

No, you did not misread that. This supposed “genius” introduced himself to his victims as “Ted”. Furthermore, he kept trying, even after multiple women had turned down his fake requests for help.

Unfortunately, police back then weren’t as knowledgeable about serial killers. As a result, they ignored these tips because Bundy was a law student with no criminal record.

Afterwards, police found handcuff keys in the parking lot. These keys were later tied to the same handcuffs that Bundy had used on one of his earlier kidnap victims.

As you can see, Bundy wasn’t particularly crafty or “smart”. Not only did he use his own car and make himself extremely visible by hanging around the school and approaching multiple people, he also dropped the keys belonging to handcuffs that he had used on an earlier victim. A victim who had escaped and survived, taking the handcuffs with her.

A smarter killer would have discarded those keys immediately and in a much better location.

In 1978, Bundy entered a sorority house at Florida State University. Over 30 people were asleep in the house at the time. He then proceeded to attack four women over the course of 15 minutes.

After fleeing from the house, Bundy traveled eight blocks and attacked another student in her apartment.

This is not the work of a serial killer who is calculated or sophisticated.

A genius would not enter a sorority house that is full of potential witnesses and then attack multiple people. If any of these women had stumbled across Bundy or heard these attacks, he would have found himself in a very exposed position.

You do not have to be a genius to take advantage of a person’s good nature or willingness to help. Furthermore, you don’t have to be particularly smart to realize that pretending to be an authority figure can trick someone into trusting you.

Criminals with low and average IQs use these kinds of cons and ruses every day. And they successfully use them on people who are much smarter than they are.

In the previous section, we highlighted cases where Ted Bundy would approach multiple people on the same day. This happened because a lot of women turned him down.

In other words, Bundy wasn’t as charming and alluring as he has been depicted. A lot of women saw right through him and refused his fake requests for help.

Three of the women that Bundy approached at Lake Sammamish stated that he spoke rapidly, seemed nervous and was overly intent on getting them into his car. They also felt as though he had a hidden agenda.

Ted Bundy did not have the ability to snap his fingers and make any woman walk off with him. Instead, he repeatedly approached his targets until one of them finally agreed to “help him”.

It would not be surprising if the victims Bundy did “trick” had a bad feeling about him. A gut feeling that was yelling at them to say no.

Unfortunately, many of us find it difficult to say no to people, especially when they are asking for our help. We are social creatures. It is in our nature to help other people who are in need, and sometimes we will ignore our gut instincts in order to do so.

Bundy’s first escape occurred because police allowed him to “research his case” next to a two-story window. Furthermore, they didn’t even keep him in plain sight. This gave Bundy the opportunity to jump out of the window and run towards Aspen Mountain.

In the mountains, he became lost and ended up wandering around for a couple of days. After that, he stole a car from a golf course and proceeded to drive back into Aspen.

At that point, he came to the attention of police because of his reckless driving.

If there is one thing we will give Bundy, it’s that his second escape was far better planned. He acquired a floor plan of the jail and a hacksaw, which allowed him to carve out a crawl space in his cell at night. He then carried out practice runs until the Christmas period, when there were fewer staff and prisoners around.

Although this escape plan was much better, the authorities could have easily prevented it.

In the weeks leading up to his escape, a fellow prisoner reported that he was hearing noises coming from the ceiling.

Maddeningly, the authorities failed to investigate these noises.

Once again, ineptitude had given Bundy a lifeline.

Bundy shouldn’t have attempted to escape.

Another thing worth noting is that Bundy’s escape attempts were probably unnecessary. The case against him for the murder of Caryn Campbell was steadily falling apart. It was weak from the start. However, more and more evidence was beginning to be ruled out as inadmissible.

Furthermore, there wasn’t much left on his prison sentence for the original kidnapping conviction.

All he had to do was sit tight and let the case implode. Had he done that, there was a good chance that he would have been a free man within a year and a half.

Did Ted Bundy defend himself at his own trial?

Yes, he did. But look at how that turned out.

Bundy let his ego get in the way of his own defense and in the end, he was found guilty and sentenced to death. At the start, prosecutors were open to a plea deal. A deal which would have saved Bundy from the death penalty.

Despite this, Bundy refused to plead guilty and then decided to mount his own defense. A strategy that was considered terrible, even at the time.