A nostalgic look back at the year 1987 in Ireland.

With Or Without You.

Whether you love them or hate them, you can’t deny the fact that U2 were at the height of their popularity back in the late eighties and early nineties.

In March, 1987, the Dublin-based rock band released their critically acclaimed album, The Joshua Tree, which contained chart-topping singles such as “With Or Without You” and “I Still Haven’t Found What I’m Looking For”.

On the 20th of January, 1987, the 25th Dáil was dissolved after four Labour ministers resigned from the Fine Gael-led coalition government due to a disagreement over budget proposals.

This led to a general election in February, which saw Fianna Fáil regain power, with Charles Haughey returning as Taoiseach for the third and final time. 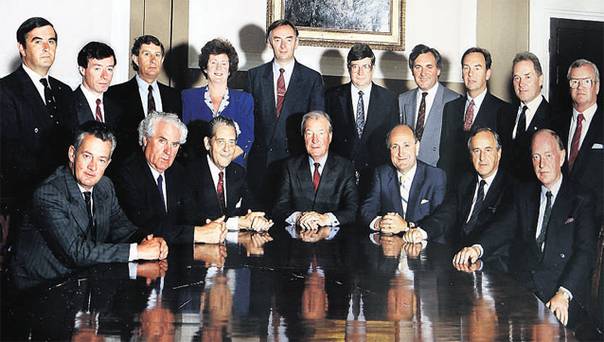 It is worth noting that this was a minority government and that it actually had the support of Fine Gael. Under what became known as the Tallaght Strategy, Fine Gael refused to oppose any of Fianna Fáil’s economic reforms.

This strategy, they claimed, was in the nation’s best interests.

The National Lottery started in 1987.

The National Lottery launched and started to sell scratch cards in March of 1987. However, it wasn’t until the following year that the state-owned company would introduce the lottery draw that we’ve all become accustomed to. 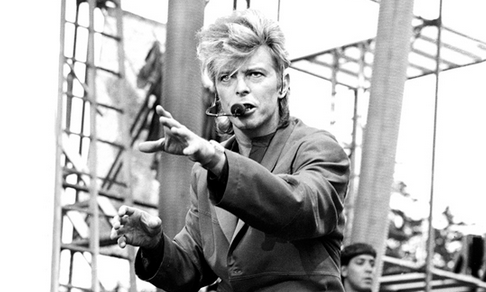 On the 26th of July, Dublin-born cyclist Stephen Roche became the first Irish man to win the Tour de France after he crossed the finish line with only meters to spare.

After winning the race, Roche was so exhausted that he collapsed and required an oxygen mask. Upon regaining consciousness, he was asked if he was OK.

In response, he allegedly said, “Yes, but I am not ready for a woman straight away!”

One of the top grossing movies of the year was a comedy film called 3 Men and a Baby, which starred actors Tom Selleck, Steve Guttenberg and Ted Danson.

The movie was about three bachelors trying to adjust to the arrival of Danson’s love child:

Ten civilians and a police officer were killed in the blast, with a further 63 people injured. Later, the IRA would claim that it was a mistake and that they had been targeting a parade of British soldiers that had been marching towards the ceremony.

The atrocity led to a drop in support for both the Provisional IRA and Sinn Fein. 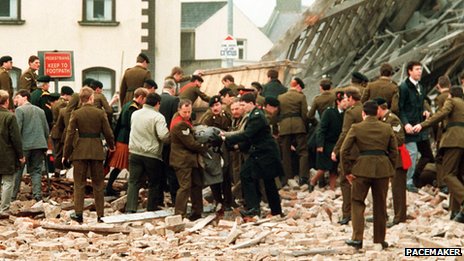 This was also the year that saw the single “La Bamba” by Los Lobos reach the number one spot in several different countries around the world, including Ireland.

The song was a cover of a Mexican folk song that had been originally adapted by American singer Ritchie Valens back in 1958.

On the 20th of September, the All-Ireland Senior Football Championship final was held between Meath and Cork. Meath won the game by 1-14 to 0-11 thanks to a goal by Colm O’Rourke.

Here are some great video highlights from the Meath and Cork game:

With only three minutes left on the clock, Scottish midfielder Gary Mackay scored the only goal in a game that put Ireland through to the UEFA Euro Championship.

This was at the expense of Bulgaria, who were favourites to win the game and progress.

Later on, Irish manager Jack Charlton talked about how shocked he was when someone called him to congratulate him on the result.

When he received the call, he didn’t realise that he had been watching a later showing of the game, in which both teams were still drawing 0-0. 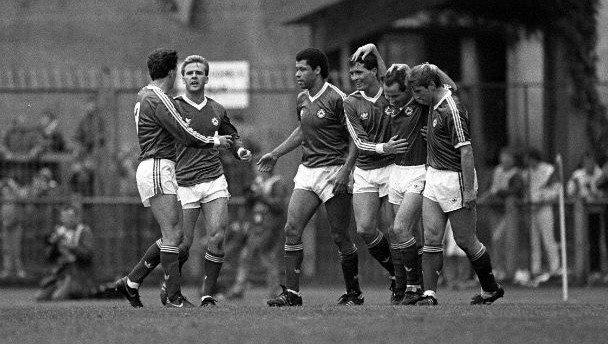 The Loughgall Ambush was another high-profile event that took place during the troubles in Northern Ireland.

On Friday, the 8th of May, 1987, eight IRA members were ambushed by the SAS as they attempted to launch an attack on the RUC base in the village of Loughgall.

Tragically, the ambush also led to the killing of Anthony Hughes, who was an innocent civilian that was driving by the base at the time.

It is believed that the SAS mistakenly identified Anthonhy and his brother before firing on them from behind. 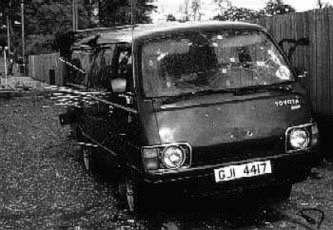 This event was the single biggest loss of life for the Provisional IRA.

Beaumont Hospital was opened in 1987.

In November, Beaumont Hospital was officially opened in Dublin. This came after the closure of two older hospitals, Jervis Street Hospital and The Richmond.

Today, Beaumont is the second largest hospital in Ireland.

Ireland won the Eurovision in 1987.

Irish singer Johnny Logan delighted the nation when he won the Eurovision Song Contest in July of 1987.

The song, which was called “Hold Me Now”, had been self-penned by the Australian-born singer.

This was the second time that he had won the competition.

1987 is often cited as the year that Ireland started to deal with the economic problems that had been plaguing it for well over a decade.

Over the course of the next couple of years, economic reforms were introduced as the minority Fianna Fáil government (backed by Fine Gael) sought to reduce the level of borrowing.

Ireland’s economy in the 1980s was pretty poor.

The Simpsons made their debut.

This was the year that The Simpsons were introduced as an animated short on The Tracey Ullman Show.

However, it wasn’t until three seasons later that the family was spun off into their own cartoon show.

The American rock band Heart released their single “Alone” in May of 1987.

The song reached number three in the Irish Singles Charts.

The Ploughing Championship took place in Leitrim in 1987.

In 1987, the National Ploughing Championship was brought to Carrigallen, County Leitrim.

Here is some great Youtube footage from the event:

The Iran-Contra affair continued throughout 1987 as US President Ronald Reagan was forced to admit the fact that senior officials had facilitated the sale of weapons to Iran. This was despite the fact that Iran had been under an arms embargo at the time.

While some officials felt that such a trade could secure the release of several western hostages in Lebanon, other senior intelligence members saw the deal as an opportunity to secretly continue their funding of a Nicaraguan rebel group called the Contras.

The Boland Amendment, which had been passed by Congress in 1982, forbade US assistance to the group.

Garret FitzGerald resigned as the leader of Fine Gael.

This was the year that Garret FitzGerald stepped down as leader of Fine Gael.

After a heavy loss in the general election, the Dublin-born politician resigned, allowing Alan Dukes to take the hot seat.

FitzGerald retired from politics in 1992. In 2011, he passed away after a serious illness. 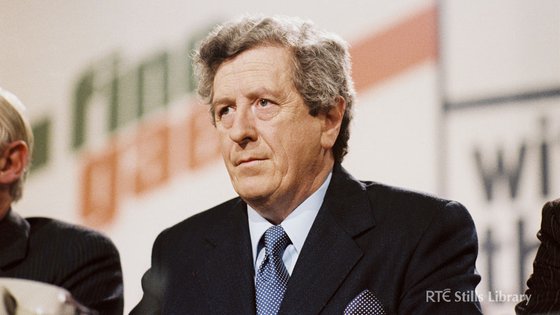 In June of 1987, the movie Predator hit cinemas as Arnold Schwarzenegger and his special forces team were sent on a rescue mission to the jungles of Central America.

Unfortunately for “Dutch” and his team, they are completely oblivious to the fact that they are being stalked by an extraterrestrial being who likes to hunt other species for sport.

Although the movie received its fair share of negative reviews from film critics at the time, that didn’t stop it from grossing nearly $98,267,558.

Zig and Zag made their debut.

1987 was the year that puppet duo Zig and Zag appeared on Dempsey’s Den for the first time.

The alien twins from the planet Zog quickly went on to become a fan favourite:

We found this recording of an RTE Late News programme on Youtube.

The news reader is the late Vere Wynne Jones, who passed away in July of 2006 after a long battle with cancer.

The news headlines from that day:

After the news segment, we are shown a preview of the TV shows that RTE were due to broadcast over the course of the next week.

This is before a young Kieran Fitzgerald “closes” the channel for the night. Fitzgerald would later go on to become the Garda Síochána Ombudsman Commissioner.

In April of 1987, RTE presenter and DJ Vincent Hanley passed away after an AIDS-related illness.

Hanley had spent the previous three years presenting the TV show MT-USA, which was an Irish version of MTV.

The Tipperary native was the first Irish celebrity to die from the virus. 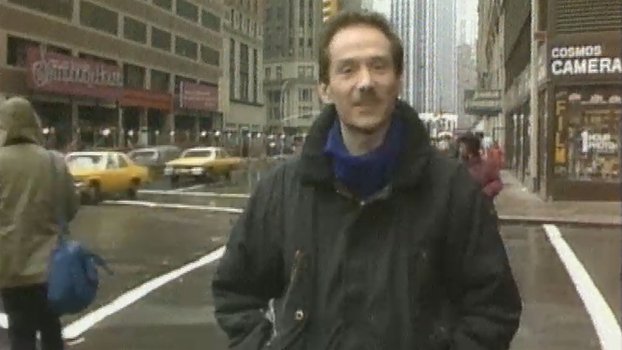 This was the year that RTE presenter Gerry Ryan was given the nickname “Lambo.”

As part of a segment for The Gay Byrne Show, Gerry and a group of volunteers spent some time in the wilderness of Connemara, which is in the west of Ireland.

He was given the nickname after he claimed that he had killed and eaten a lamb in order to survive. Later on, it was revealed that the story was untrue. 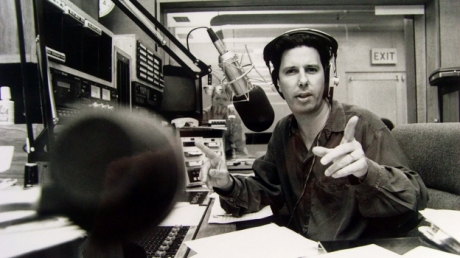 We also saw the introduction of the new vehicle registration plates. These new plates contained the year, the sequence of registration and the county that the vehicle was registered in.

Before 1987, it had been based on the alphabetical order of the county: 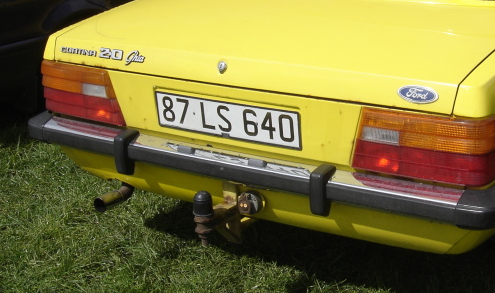