This is a simple guide on whether Ireland is a part of the UK or not. I wrote this post because the topic can be pretty complicated for non-Irish people. To make matters worse, other articles on the subject seem to start off with long-winded history lessons. I’ll try and get to the point before getting into detail.

First of all, you have to understand that the island of Ireland is split into two different countries.

These are two separate countries. They both use different currencies and they both have different governments and laws. 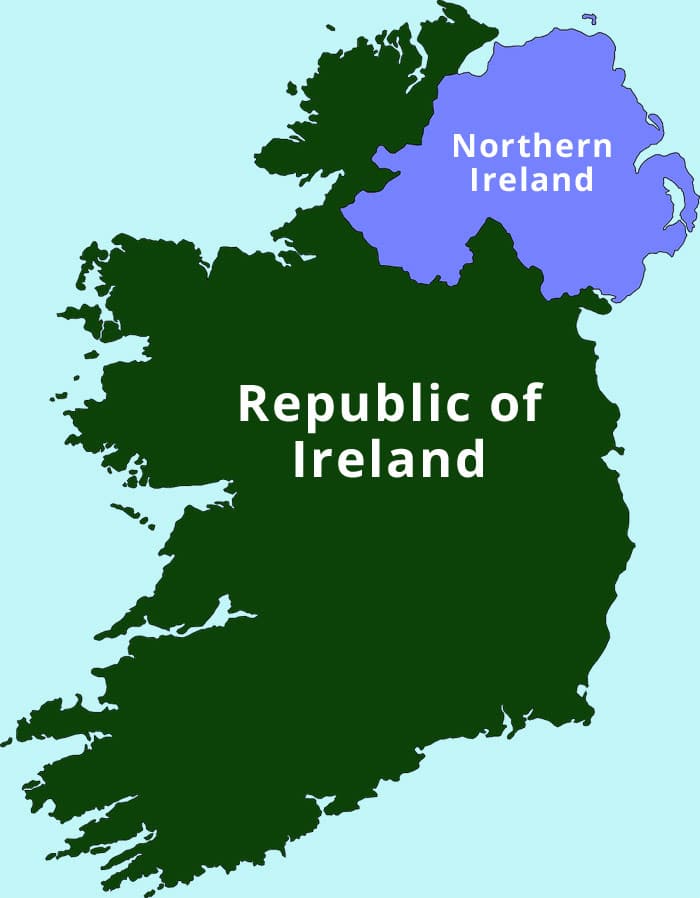 The map above illustrates how the island of Ireland is separated into two different countries.

The Republic of Ireland is NOT a part of the UK. It is a completely independent nation that has no sovereign ties with the UK, Great Britain or England. It is no longer under English rule.

However, Northern Ireland is a part of the UK.

So, just so we’re clear here:

Or, if you prefer a visual description: 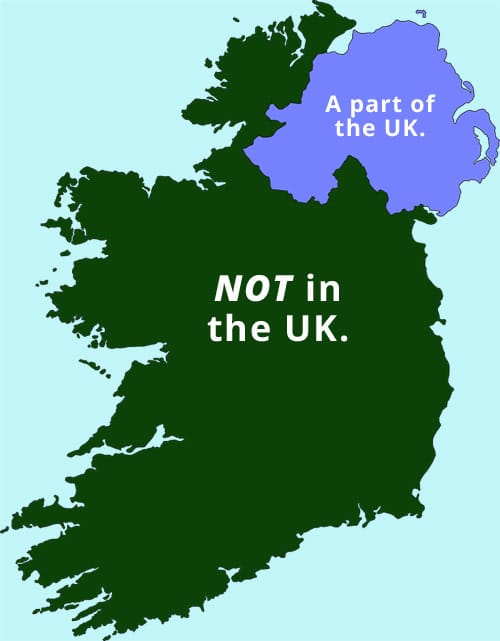 A map showing which parts of Ireland are in the UK.

As you can see, only Northern Ireland is a part of the UK. The rest of the island of Ireland is completely independent.

Why are people confused by this?

The confusion stems from the fact that most people use the word “Ireland” to describe the Republic of Ireland. This is because “Ireland” is actually the official name of the state.

The “Republic of Ireland” is a legal description of the country. It is not an official name. This legal description was adopted in 1949, twelve years after the Irish constitution was ratified. This description is typically used when people want to avoid any ambiguity.

Article 4 in the Constitution of Ireland states the following:

The name of the State is Éire, or, in the English language, Ireland.

Essentially, this means that “Ireland” is the official name of both the geographical island and the sovereign nation

Why doesn’t Ireland use the “Republic of Ireland” as its official name?

The history of Ireland and its partition into two separate countries is a complex one. Far too complex for me to explain in any detail.

However, let’s just say that the people of Ireland have always felt that the two countries should be reunited at some point. Whether that happens next week or three decades from now is a mute point. Many people feel as though the island of Ireland belongs to the Irish and that it was occupied by a foreign nation (Britain).

There is a large population of Irish people who were born in Northern Ireland. Although they grew up in the United Kingdom, they have Irish passports and they identify as being Irish. Many of these people would like to see Northern Ireland reunited with the independent Irish nation in the south.

When did Ireland leave the UK?

Ireland left the United Kingdom on the 6th of December, 1922 after it officially became the Irish Free State. At that point, Ireland became a self-governing dominion that was no longer a part of the UK. To mark this change, the UK later renamed itself as “the United Kingdom of Great Britain and Northern Ireland” in 1927.

Was Ireland ever a part of Great Britain?

How did Ireland become a part of the UK?

After the Irish rebellion of 1798 was quashed, Britain decided that it was time to tighten its grip on Ireland even further. Subsequently, it passed the 1800 Acts of Union. This disbanded the Parliament of Ireland and united the two kingdoms under the official name of the “United Kingdom of Great Britain and Ireland.”

A timeline of events.

A quick timeline of events:

Frequently asked questions about this topic:

How long was Ireland a part of the United Kingdom?

Ireland was a part of the UK for 121 years. However, England had brought the island of Ireland under its control long before that.

Is Dublin a part of the United Kingdom?

No. Dublin is the capital city of the Republic of Ireland, which is an independent nation. Therefore it is not a part of the UK.

Is Belfast a part of the United Kingdom?

Yes. Belfast is the capital city of Northern Ireland. Therefore, it is a part of the United Kingdom.

Is Northern Ireland a part of Great Britain?

No. Great Britain is a geographical term that refers to land mass that contains England, Wales and Scotland.

Is Ireland in the British Isles?

The British Isles is a dated geographical term that refers to the islands of Ireland and Great Britain. However, the term is controversial and the government of Ireland does not recognize it. Moreover, the Irish Embassy in London discourages its use. To avoid stirring up any drama, you can call it “Britain and Ireland” instead.

Will Ireland remain as part of the EU after the UK leaves?

Yes. Ireland will remain as a member of the European Union after the UK has left. Northern Ireland, however, will leave the EU. Although both sides have said that they do not want there to be a hard border between the two countries, this is still a complex issue that may take some time to iron out.

In conclusion: No, Ireland is not part of the UK. It is a completely sovereign nation that is independent from Westminster. However, a part of the island of Ireland is in the United Kingdom. This “part” refers to the country of Northern Ireland.

Hopefully, this article helped to clear up a few things for you!