On Irish Twitter, the pirate flag emoji (🏴‍☠️) means that the person in question is anti-government.

Or more specifically, they are against the current coalition government.

These users will put the pirate emoji in their Twitter name in order to let others know that they are anti-FFG.

The idea here is that they will remove the pirate flag and replace it with the tricolor once Fine Gael and Fianna Fail are out of power. 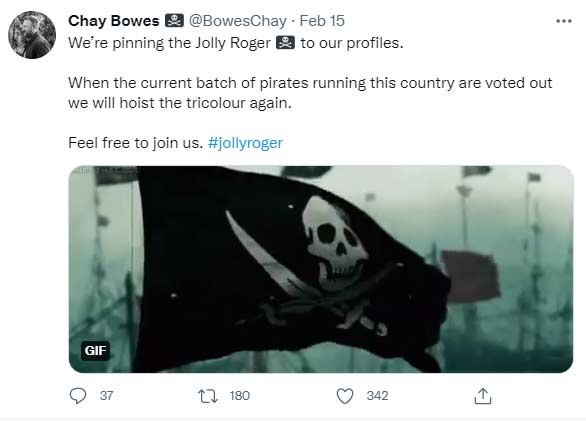 The trend started in the middle of February, 2021.

Other people on Irish Twitter will often refer to these users as “the pirates”, “the pirate flags” or “the pirate emojis”. 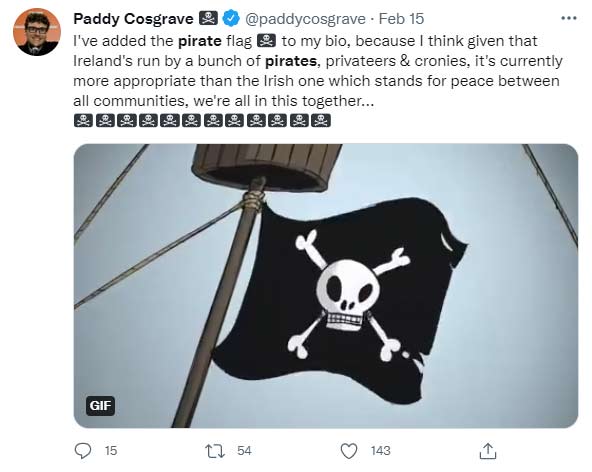 Irish tech entrepreneur Paddy Cosgrave was one of the first people to start the new trend.

Since the trend started, “the pirate flags” has become a pejorative term. People often view “the pirates” as dogmatic, unreasonable, hostile, toxic and willing to bend the truth. In other words, they will stop at nothing to get FFG out of power.

If FFG were to cure cancer, “the pirate flags” would complain that they should have done it sooner.

Who do the pirate flags support?

People with the pirate flag emoji in their Twitter names tend to support Sinn Fein.

They may also support People Before Profit.

However, if you look at their profiles, you will find that many of them will habitually attack the other opposition parties as well. “Labour? They sold us out.” “The Social Democrats? They’re too small.” “Independents? They are useless.” “The Green Party? They tax us too much.”

These users will advise you to “vote for anyone except FFG” and then proceed to chastise or “chip away” at your intentions to vote for any of the other opposition parties.

They will do this until you arrive at the “right” decision: Sinn Fein.

Take the following “pirate” as an example. 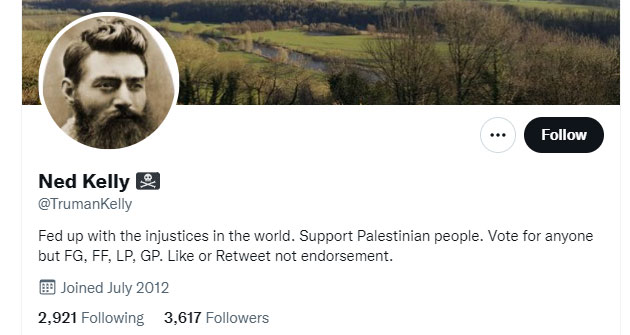 Here, Ned Kelly tells everyone not to vote for Fine Gael, Fianna Fail, Labour or the Green Party.

In an earlier tweet, he also mentions the Social Democrats.

As you can see, the list above leaves very few alternatives.

Not all Sinn Fein supporters will use the pirate flag.

Not all of them are SF supporters either.

It is also important to point out that some of the “high profile” pirates are not SF supporters and that they have personal issues with FF and FG that go past ideology and government policy.