On TikTok, writing “ratio” as a reply to someone else’s comment usually means that you want to dismiss that person’s opinion.

In this case, User A has been “ratioed”. Why? Because twice as many people liked a reply to their comment than the comment itself.

Here is an actual example. 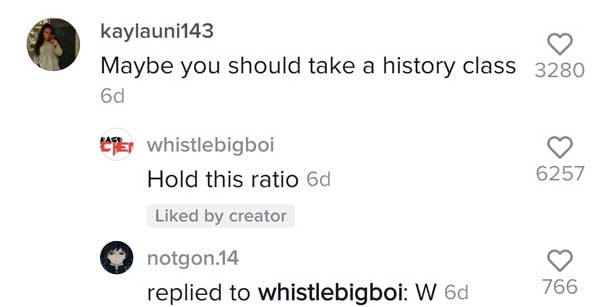 In the screenshot above, you can see that a user called whistlebigboi replied to user kaylauni143 with the comment “Hold this ratio”.

As a result, onlookers who did not agree with kaylauni143 were able to like whistlebigboi’s comment instead.

In this case, kaylauni143 has been “ratioed”. In other words, more TikTok users disagree with her comment than agree with it.

TikTok does not allow you to dislike comments or downvote them. As a result, people will sometimes reply with “ratio” so that everyone who is “watching” can have a chance to “vote” on the matter.

It is also highly disrespectful and dismissive. You can see in the screenshot above that the user replying didn’t even bother to make a counter argument. Instead, he just replied with “Hold this ratio”.

It isn’t always about disrespecting someone.

In certain cases, users will start “ratio” comment threads for the fun of it. In other words, it is kind of like starting a mini game in the comments section.

For example, if someone replies to a comment with “ratio 1:1”, then what they’re really saying is this:

This is a challenge to onlookers to keep the like counts on both comments equal. i.e. If the comment has 400 likes, then the reply should also have 400 likes.

If TikTok users notice that one comment has more likes than the other, then they will typically start to like the one that is falling behind. 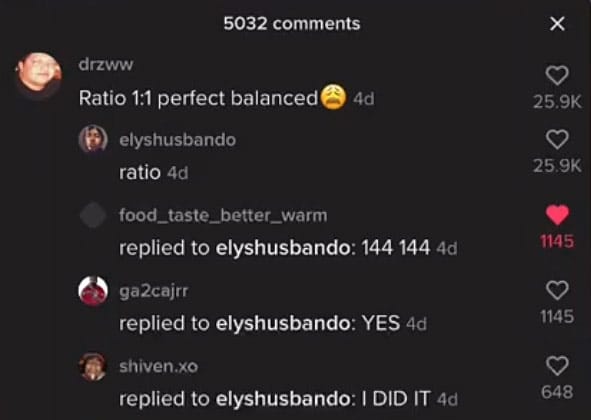 Here, you can see that both comments have 25.9K likes. For this to happen, over 50,000 TikTok users had to work together to keep these numbers the same.

Similarly, if someone writes “1:1:1”, then it means that they want their comment and the next two replies to have the exact same like counts.

If they write “1:1:1:1”, then it refers to their comment and the next three replies.

Your comment can also be “ratioed” by the number of replies.

However, if the number of replies is greater than the number of likes, then it usually means that people are arguing with each other in the reply section.

A video can also be “ratioed”.

Why? Because one of the responses to the video has received more likes than the video itself.

This is a difficult feat to pull off, as a video will typically receive a lot more views than the comments section.

In many cases, this means that the content of the video was so controversial that users “ran” to the comments section to see other people’s opinions about it.

Conclusion: It can be difficult to understand at first.

In conclusion, “ratio” can be a bit difficult to understand at first. Although the meme originally started on Twitter, it has taken on a life of its own on TikTok.

Generally speaking, its meaning depends on the context.

For example, if someone posts “ratio” in response to a controversial comment, then it is likely that the person in question is “throwing shade”. However, if it has been posted in response to something that isn’t offensive, then it is probably just a case of someone starting a game.

Basically, try not to flip out as soon as someone responds with “ratio”. It could be completely harmless and innocent.