This was the “golden age” of the DVD.

It was also a time when the “Blu-ray” and the “HD DVD” were engaged in a war to become the de facto HD format. If you stepped inside a video rental store during this period, then you’ll probably remember how each format had its own dedicated section.

However, as these two sides were battling it out for dominance, a much more dangerous “enemy” was beginning to grow in the background.

When did DVDs start to become obsolete?

There were three factors at play here.

The Blu-ray took over.

Once Blu-ray managed to establish its market dominance, it started to outpace sales of regular DVDs.

However, its impact was marginal and its “victory” was short-lived. By 2014, sales of Blu-ray also started to decline.

In February of 2019, Samsung announced that it would no longer be developing Blu-ray players for the USA.

In 2008, the world fell into an economic crisis. A global recession took hold and unemployment started to rise.

As a result, people had less money to spend on entertainment.

Although the Great Recession hastened the decline of the DVD, it did not cause it. This was merely the “punch in the gut” before the “real killer” came along.

Why did DVDs decline in popularity?

By the mid-2000s, the Internet was already starting to threaten the existence of the CD. More and more people were downloading MP3s, and the portable “Discman” player was beginning to wane in popularity.

Small music stores were also starting to close their doors.

Movies, on the other hand, were still pretty safe at the time because of their relatively large file sizes.

However, as the decade progressed, download speeds became faster and data limits started to increase. Furthermore, the emergence of smartphones and 3G networks meant that people were starting to use the Internet far more frequently.

By the end of the 2000s, you no longer had to sit at a PC or use a laptop in order to go online. The “world wide web” was now literally at your fingertips.

As the Internet continued to grow in popularity, so did online streaming services such as Netflix and Hulu. 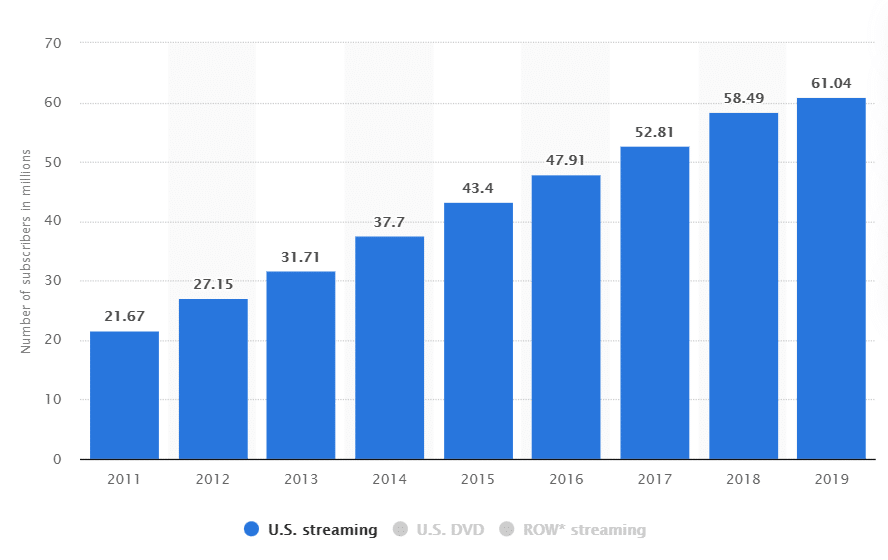 Between 2011 and 2015, the number of Netflix streamers in the United States more than doubled.

Instead of having to fumble through their DVD collections or take a 30-minute trip to their local rental store, Internet users now found themselves in a position where they could instantly access hundreds of movies and TV shows.

Not only was streaming far more convenient, it was also cheaper. At the time, renting one movie cost roughly the same as paying for an entire month of Netflix.

To make things even more difficult for the DVD format, there were also a growing number of websites that gave users the ability to illegally stream TV shows and movies for free.

At this stage, it became extremely clear that the business model of selling and renting out DVDs was unable to withstand the onslaught of the digital age.

For example, in the first quarter of 2011 alone, physical rentals plunged by 36%.

Why did movie rental stores such as Blockbuster fail?

As DVD sales declined, movie rental stores attempted to adapt by branching out into other areas.

It was around this time that chains such as Blockbuster started to sell smartphones and merchandise.

However, this was not enough to offset the decline in DVD sales, as the cell phone market was far more competitive. Not only did they have to compete with traditional phone stores, large retailers such as Walmart, Best Buy, Amazon and Tesco were also getting in on the action.

Furthermore, many of these movie rental companies were in debt and reeling from the recession. As a result, they lacked the funds to try and launch their own online streaming services.

All of this, coupled with poor management decisions, sounded their death knell.

The DVD format isn’t dead yet, but it is dying.

The DVD is not dead yet. However, it is becoming increasingly likely that the format will be phased out at some point in the not-so-distant future.

That time will come when it is no longer economically viable for companies to produce DVDs or DVD players.

In other words, if sales of DVDs and Blu-ray continue to decline, then it won’t matter if a small minority of people prefer physical media.

In the end, money will be the deciding factor.