Crime scene staging refers to an attempt by the perpetrator to mislead the investigation.

The offender will do this by toying with the crime scene and introducing false evidence.

An example of crime scene staging.

A man brutally murders his wife with a kitchen knife following a heated argument. Immediately afterwards, he panics and realizes that he will be the police’s main suspect.

As a result, he decides to make it look like a break-in occurred.

In an effort to make the killing seem like a burglary that went wrong, he breaks a window at the rear of the house and then hides some of their valuable belongings. He also dumps several drawers onto the floor and smashes random objects.

By doing this, he is attempting to deflect attention away from himself.

In other words, he is hoping that this staged crime scene will fool investigators into believing that the perpetrator broke into the house and then murdered his wife during a physical confrontation.

However, experienced detectives will always be on the lookout for crime scene staging. If a small detail does not line up with their experience of previous crimes, they will quickly realize that someone is trying to lead them astray.

In this fictional case, the victim has dozens of stab wounds. As a result, the investigators determine that it was a crime of passion. Furthermore, they are unable to find any evidence of footprints near the side gate.

While inspecting the house, they also realize that this “burglar” ignored an extremely valuable item and that he broke a random object that is “out of the way”.

Consequently, they begin to suspect the husband. 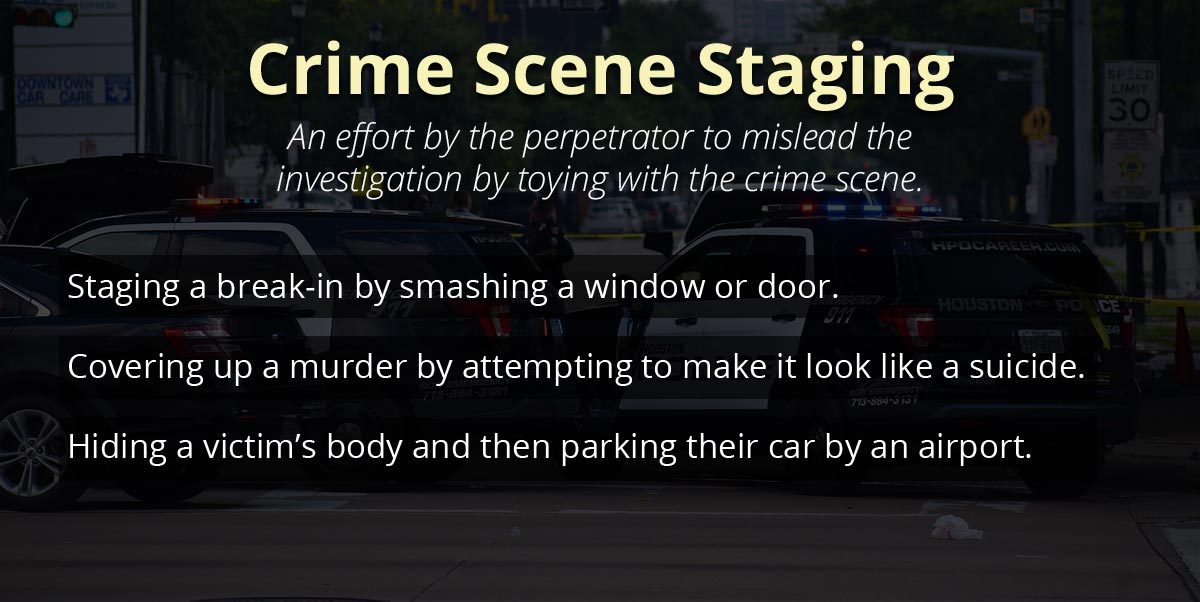 In January of 1974, serial killer Ted Bundy abducted Lynda Ann Healy from her basement bedroom in the University District of Seattle.

However, before leaving, he decided to stage the crime scene in order to make it look as though Lynda had left the house on her own accord.

To do this, he did three things.

In this case, Bundy staged the scene in order to buy himself some time. By making everything seem as normal as possible, he was able to delay the start of a homicide investigation.

Had he not done this, it is likely that one of Lynda’s roommates would have immediately spotted the bloodstains.

Here are some other examples of crime scene staging.

As you can see, offenders will use a variety of methods to cover up their crimes and deflect attention away from themselves.

Thankfully, law enforcement is pretty adept at seeing through these attempts. This is because most perpetrators lack the knowledge and experience to avoid making any mistakes.