On January 31st, 1974, Ted Bundy abducted 21-year-old Lynda Ann Healy from her house in the University District of Seattle. 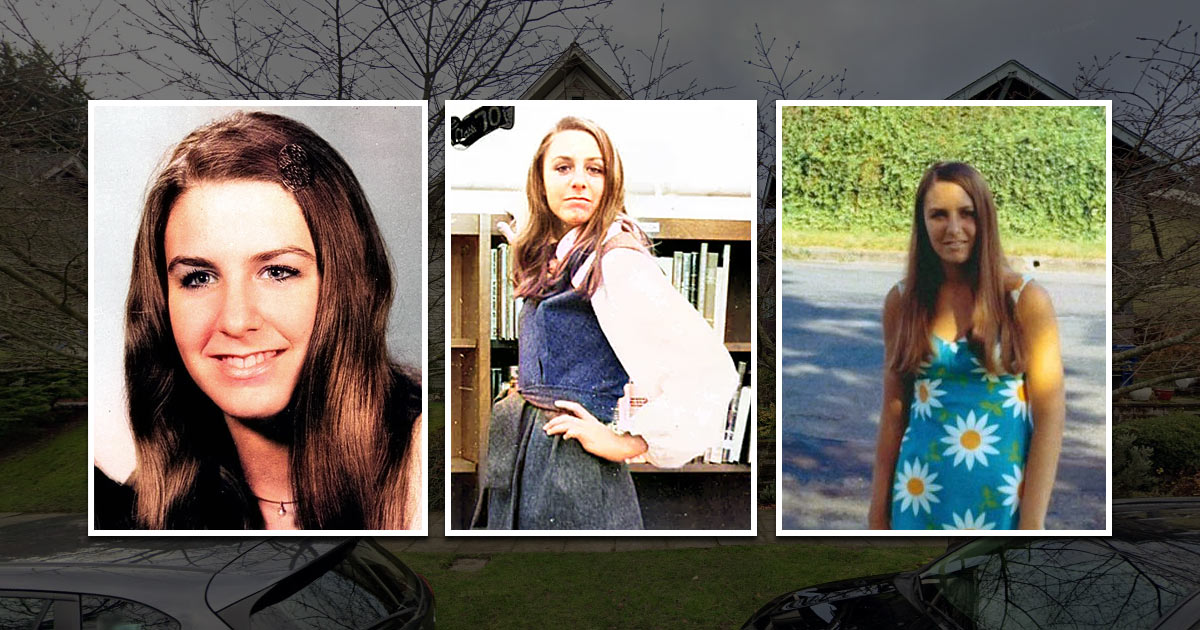 Lynda Ann Healy was born on July 3rd, 1952. At the time of her murder, she was majoring in psychology at the University of Washington. Her goal in life was to work with children who suffered from intellectual impairments.

Lynda grew up in the middle-class suburban neighborhood of Newport in Bellevue, which lies five miles east of Seattle.

During her first couple of years at the University of Washington, Lynda lived in the residence halls on campus. However, for her final year, she decided to move into a house at the northern end of the “U-District” with four of her friends. 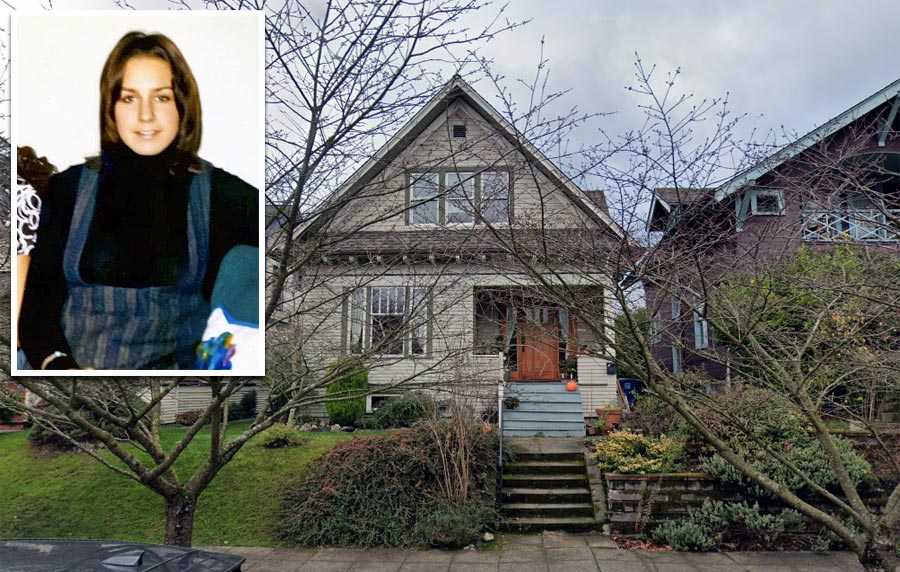 During her final year, the young college student lived in this shared house at 5517 12th Avenue NE in Seattle. This is the house that Ted Bundy abducted her from.

On the night of her disappearance, Lynda and her friends were drinking at a nearby bar called Dante’s Tavern.

Although the group had a couple of beers, they did not stay out too long. This is because Lynda had to be up early for work the next morning and another one of their friends needed to catch a bus before 10 p.m.

As a result, they finished their drinks and left Dante’s shortly after 9.30 p.m. 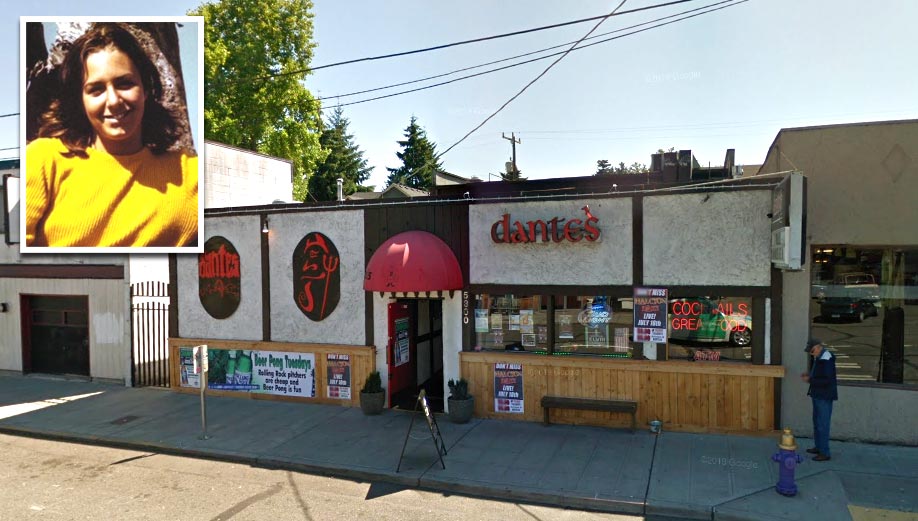 An old Google Street View image of Dante’s Tavern at 5300 Roosevelt Way. At the time, Dante’s was a popular dive bar for college students. These days, the building no longer exists. In 2015, an electrical fire left it damaged beyond repair.

Lynda’s presence at Dante’s on the evening that she went missing is significant.

According to his long-term girlfriend Liz Kloepfer, Ted often frequented Dante’s Tavern and another nearby bar called O’Banion’s.

This raises the possibility that Bundy locked eyes on the 21-year-old while she was out socializing with her friends. 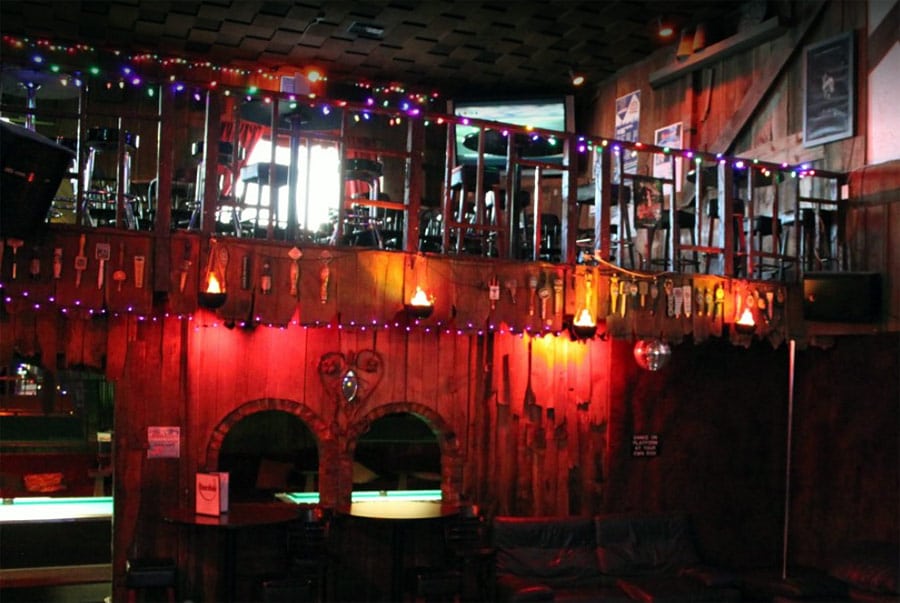 A photograph of the inside of Dante’s Tavern. This was taken in 2011, before the building was torn down. According to reports, the group were sitting on the second floor.

Lynda and her friends arrive home.

Lynda and her friends returned to their house on 12th Avenue at around 10 p.m.

The quickest route back from Dante’s was only 0.2 miles long. It would have taken the group roughly five minutes to walk it.

An aerial map that shows the quickest route between Dante’s Tavern and Lynda Healy’s house. As you can see, she lived about two blocks away.

After settling in at home, Lynda spoke to her boyfriend on the phone for about an hour. She also sat and talked with one of her roommates for a while.

That evening, one of the women thought that she saw a shadow lurking in the darkness outside. However, she quickly dismissed it as a figment of her imagination.

It is possible that she caught a glimpse of Bundy prowling around outside. If it was him, it is likely that he was watching them, assessing the situation and planning what to do when the last light went out.

After saying goodnight to her roommate, Lynda Ann Healy walked down to her bedroom in the basement and got ready for bed.

This was the last time anyone saw her alive.

The abduction of Lynda Healy.

Lynda worked for a company that compiled weather reports for local ski resorts. Each morning, she would wake up at 5.30 a.m. and then cycle to the college radio station so that she could read out the snow conditions for each resort. 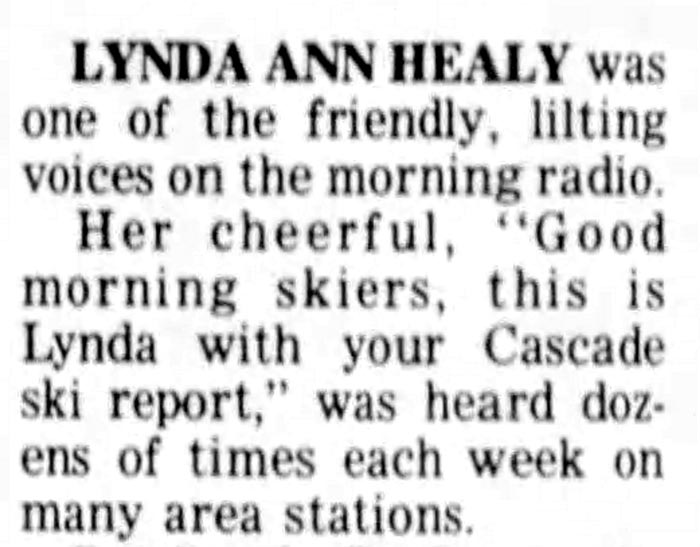 A clipping from a newspaper article that was published in the News Tribune on July 28th, 1974.

At 5.30 a.m., the radio on her alarm clock started playing, just like it normally did. However, this time, it didn’t stop.

When Lynda’s roommate realized that the radio was still playing, she didn’t believe that anything was out of the ordinary. Her initial assumption was that Lynda didn’t have work that morning and that she was still lying in bed listening to the radio.

However, it wasn’t long before a phone call from Lynda’s workplace shattered this assumption.

That morning, at 6.30 a.m., Lynda’s boss called the house to find out why one of his most dependable employees had failed to turn up for work.

He knew that this unexplained absence was extremely out-of-character for the young college student. Feeling concerned, he implored her roommates to check if her bicycle was still in the house.

The bicycle was still there.

When her roommates investigated the bedroom, it seemed completely normal. There were no visible signs that anything sinister had occurred.

Despite this, something unusual did catch their eye. On the mornings when Lynda had to wake up early for work, she never went through the effort of making her bed.

However, on this particular morning, her bed was neatly made. In fact, it was pristine.

Shortly afterwards, one of the housemates checked the side door that led to the basement and discovered that it was unlocked. 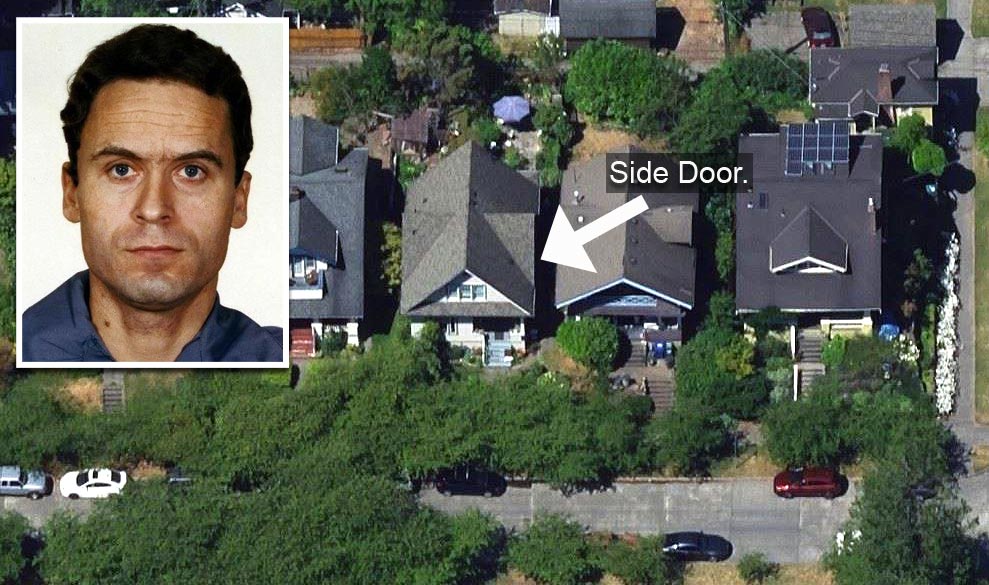 The door on the right side of the house was unlocked. This side door led down into Lynda’s room in the basement. Inset is a photograph of Ted Bundy.

This was unsettling, as one of the roommates clearly remembered that she had locked it before going to bed. 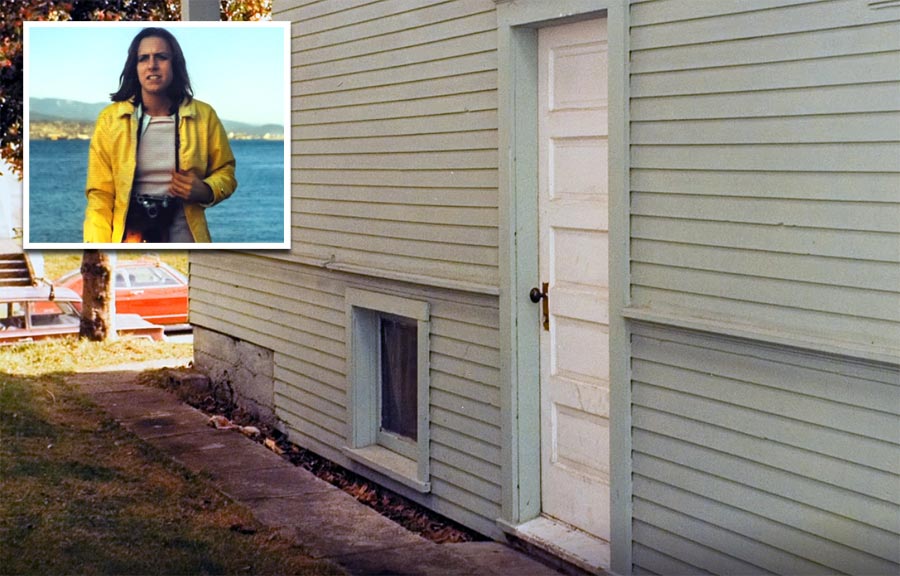 A photograph of the door at the side of the house. Inset is a photograph of Lynda with a camera. According to her friends and family, she was an avid photographer who rarely left home without it.

Their worry turns into alarm.

Although the four women knew that something was off, they initially rationalized her unexplained absence by speculating that she might have gone to school or traveled to Olympia to see her boyfriend.

However, as the day wore on, their anxiety about the situation steadily increased. 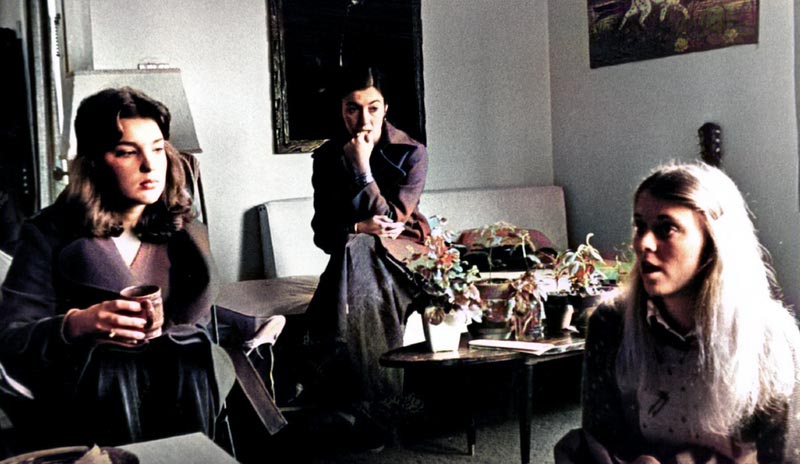 A photograph of three of her roommates.

After making a series of phone calls, they learned that no one had seen Lynda.

Consequently, when Lynda’s father and brother arrived at the house for a planned dinner, the housemates decided that it was finally time to drop their wishful thinking and raise the alarm.

When Lynda’s father James learned about the situation, he called his wife and told her that no one had seen their daughter since the night before. Because it was only 6 p.m., he suggested that they wait a while to see if she turned up.

However, Lynda’s mother Joyce was having none of it. As soon as the call ended, she immediately contacted the police.

The investigation into her disappearance.

Although two patrolmen were quick to arrive at the house and take statements, they had no reason to believe that a violent crime had occurred.

In their opinion, this was probably just another case of a college student running off to visit their boyfriend. That or she had hitchhiked somewhere and attended a party.

However, later that night, a homicide detective arrived at the house to investigate.

While he was inspecting Lynda’s room, he pulled back the blankets on her bed and noticed that there were blood stains on the sheet and pillow. 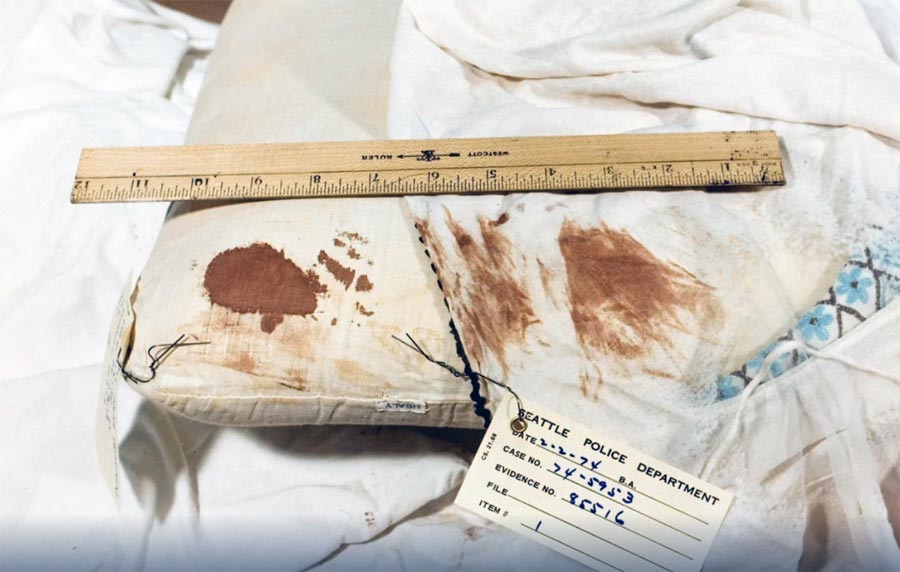 Bloodstains were visible on the pillow.

Moments later, he looked inside the closet and discovered the nightgown that Lynda usually wore to bed.

There were blood stains around the collar area.

At first, there was a sense of confusion about her disappearance. Although Lynda Ann Healy had clearly lost some blood, her bed was neat and her nightgown was hanging in the closet.

Aside from the bloodstains, there were no obvious signs that any violent crime had taken place. 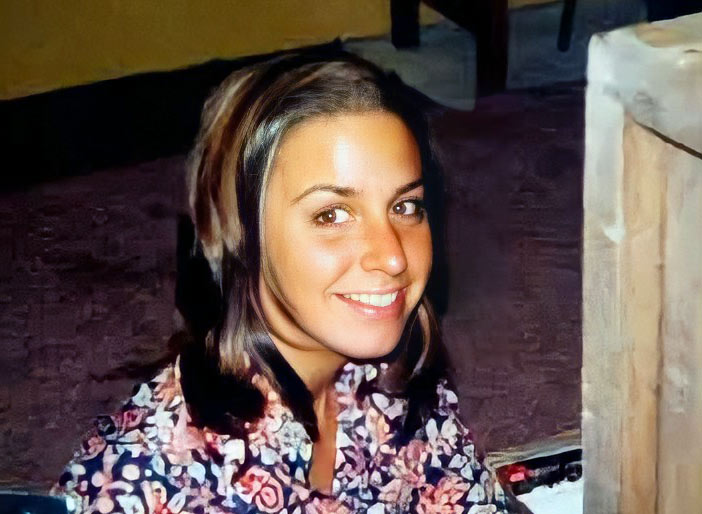 A digitally enhanced image of Lynda.

That night, Ted Bundy crept into the house while the women were sleeping and struck Lynda Ann Healy over the head.

Because her roommate in the adjoining basement room did not hear anything, it is likely that this attack was quick and brutal.

After rendering her unconscious, Bundy took some time to tidy up the crime scene. By doing this, he could extend the amount of time it would take before the police finally realized that they had a murder case on their hands.

Lynda’s bag and clothes were also missing from her bedroom. It is likely that he did this in order to make it appear as though she had left the house on her own accord.

In law enforcement, this is known as “crime scene staging.”

Had the detective not arrived that night and pulled back the blanket on her bed, it might have taken days before someone eventually spotted the blood. 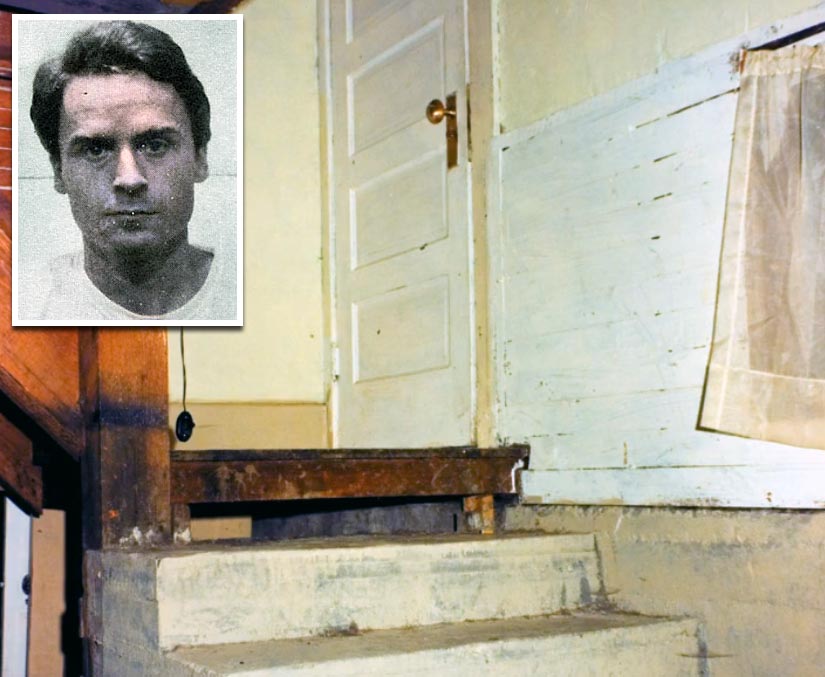 The side door provided quick and easy access to the basement.

After cleaning the scene, Bundy carried his unconscious victim out through the door at the side of the house and then loaded her into his Volkswagen Bug.

He then drove to a secluded access road at the base of Taylor Mountain.

When two forestry students discovered the skull of Brenda Carol Ball on Taylor Mountain in March of 1975, the police launched a large-scale search of the area.

During the operation, they came across the lower jaw bone (mandible) of Lynda Ann Healy. They also discovered the skulls of Susan Rancourt and Roberta Parks. 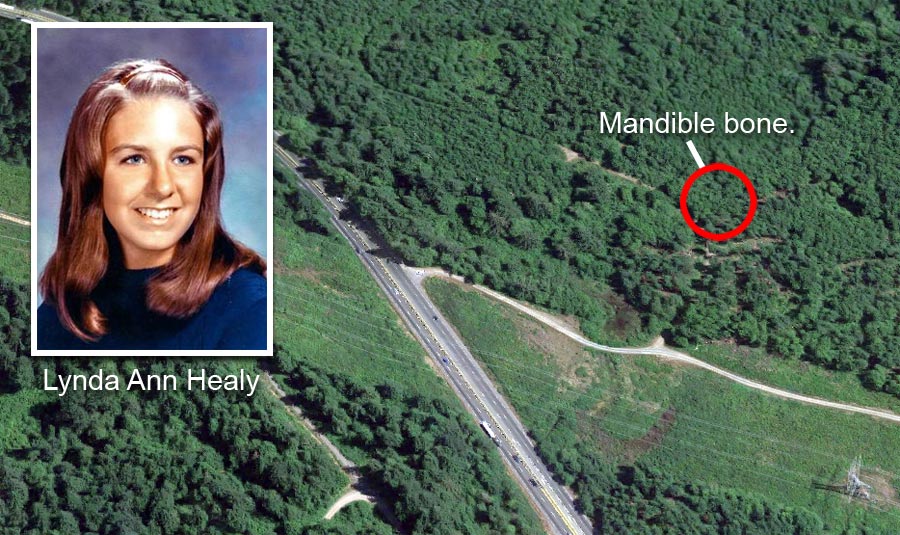 This is the Taylor Mountain site where Ted Bundy dumped the remains of Lynda. A search team discovered her lower jaw bone in the area that we have circled in red.

It is likely that Bundy murdered Lynda at this location and then dumped her body in the woods.

That night, he would have parked his Volkswagen Bug somewhere along the small access road that runs parallel to the power lines.

Bundy chose this area because he was familiar with it. According to police reports, he hitchhiked and camped on Taylor Mountain on a number of occasions in the past.

Because it was late at night and there was no lighting, he knew that there would be little chance of someone disturbing him.

Was Bundy stalking her beforehand?

Although it is certainly possible that Bundy spotted Lynda at Dante’s Tavern and proceeded to stalk her, it is also just as likely that he randomly happened across her house late at night.

During interviews, Bundy admitted that he regularly engaged in voyeurism, particularly when he was drunk.

Furthermore, Ted’s girlfriend Liz Kloepfer noted that his behavior began to change in 1974. Instead of spending the night at her apartment, he would often choose to walk home.

Interestingly, Liz’s apartment was a ten-minute walk away from the rooming house where Lynda Ann Healy was living. 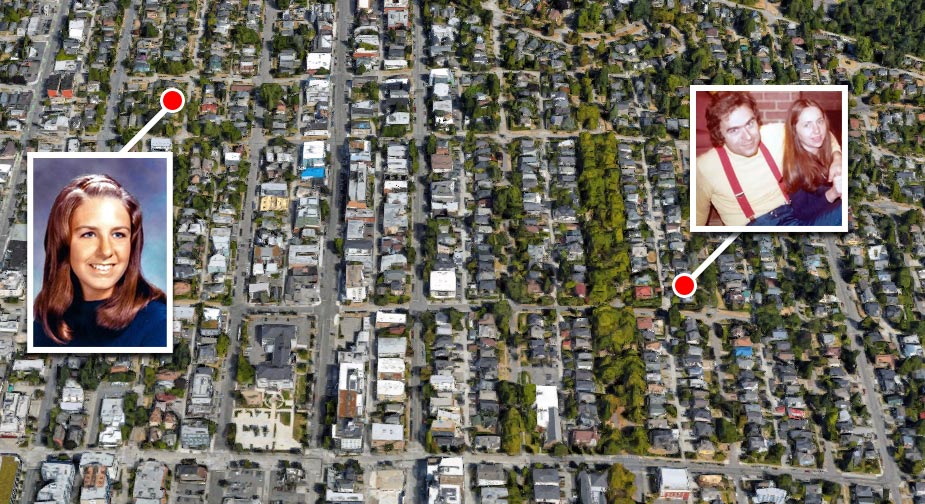 An aerial image of the northern end of the U-District. As you can see, the two houses are relatively close to one another.

Considering the short distance involved and Bundy’s habit of drunkenly prowling around the streets late at night, it stands to reason that he might have spotted the lights and decided to “investigate”.

It is likely that after seeing a potential target, he probed the exterior of the house for an access point.

Once he had assessed the situation and come up with some sort of plan, he probably left the scene on foot and returned later on in his Volkswagen.

Sadly, we will probably never find out exactly what happened on that fateful night. All we know for sure is that Ted Bundy abducted and then murdered a young woman who had her entire life ahead of her.