If someone replies to a Tweet with a dot or a full stop character, then it means that they disagree with it.

By replying with a dot, they are giving onlookers the opportunity to like their Tweet instead of yours.

This is kind of like starting an impromptu Internet poll.

The dot is another way of saying “ratio”.

Essentially, this is just another way of pulling a ratio on someone. 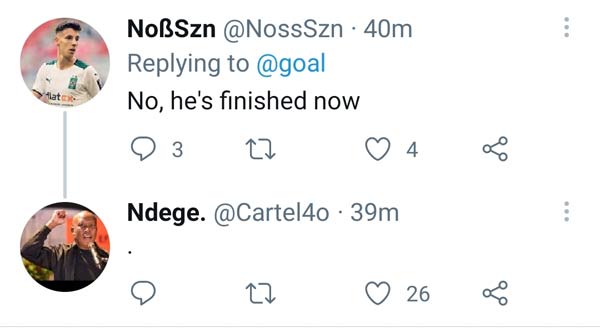 Here, you will notice three things.

In this case, the first user has been “ratio’d”.

In other words, the reply to his Tweet has more likes than his.

This means that most onlookers disagree with him.

Why reply with a dot though? Why not just say that you disagree?

By replying with a dot, the person is disagreeing with the Tweet without having to go through the bother of writing out a full argument against it.

It is a way of telling someone that their argument is so stupid that it does not deserve a proper response.

Another point worth mentioning is that the exact same “arguments” are often repeated on social media on an hourly basis.

In other words, the person who is replying with a dot might have already seen the same statement a hundred times.

As a result, typing out a full reply might seem like a waste of energy to them.