In a previous article, we pointed out how the current rental crisis in Ireland is due to a lack of supply. We also pointed out that TDs and local councillors were adding to the problem by objecting to housing plans in their constituencies.

Unfortunately, it seems as though politicians are willing to engage in NIMBYISM if it secures them votes from existing residents. Furthermore, they are willing to completely disregard their party’s national policies while doing so. 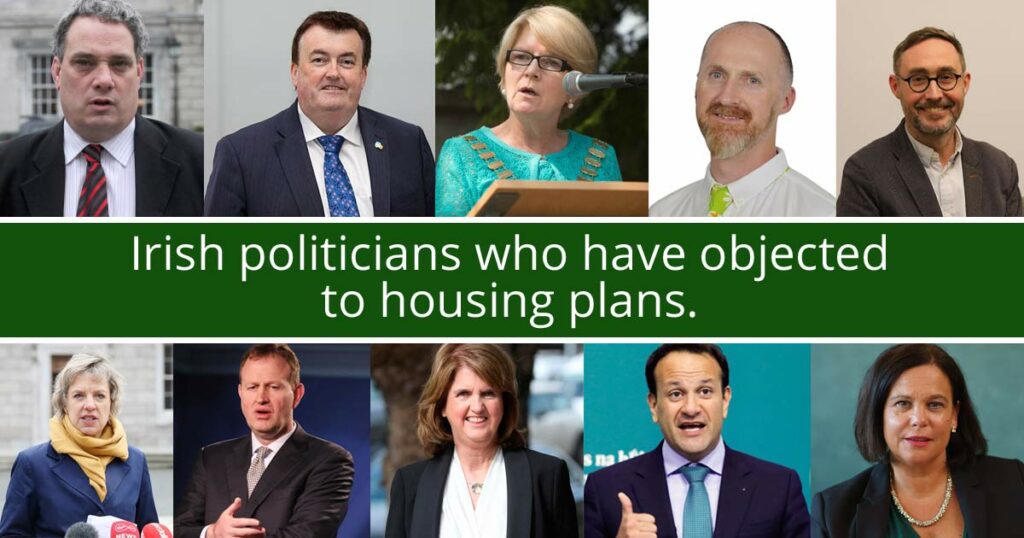 If there is a chance to curry favour with local voters, certain politicians will suddenly lose sight of the housing crisis and throw their support behind local objectors.

In a lot of cases, the reasons behind these objections are spurious and unconvincing. Generic excuses such as “the area isn’t suitable” or “the building is out of character” are particularly common.

Essentially, if the votes are there, they will find some sort of excuse to justify their opposition.

Irish TDs and councillors who have objected to housing.

In this article, we are going to list out Irish TDs and councillors who have objected to housing plans.

In December of 2019, Sinn Fein TD Aengus Ó Snodaigh led local opposition against plans to build 1,102 residential units at a site near the Old Naas Road in Dublin 12.

Deputy Ó Snodaigh objected to the development because he believed that it was ‘totally at odds’ with the density of the surrounding neighborhood.

In October of 2019, Fianna Fail Cllr. Catherine Fitzgerald opposed plans to build a social housing estate close to her home on Abbeyleix Road in Portlaoise. According to Fitzgerald, placing apartments in the area wasn’t “proper planning”.

In 2019, Fine Gael TD Colm Brophy objected to a major housing development in Knocklyon, Dublin. According to Mr. Brophy, his constituents emailed him to express their “concern and horror” about the plan to build 590 apartments in the area.

In July of 2021, Sinn Féin councillors Grace McManus and Dermot O’Brien voted against plans to build 18 apartments on public land in Wicklow.

Sinn Fein housing spokesperson Eoin Ó Broin opposed a social housing project in his constituency due to the “strength of local opposition” to the development.

In September of 2021, Green Party TD Francis Noel Duffy threw his support behind residents’ objections to 140 houses and 189 apartments in Woodstown, Dublin.

According to Mr. Duffy, the scheme was “out of keeping with the existing development in the area”.

TD Gary Gannon opposed an apartment development in his constituency because he felt that it was “excessive” and that it would have a harmful effect on the architectural make-up of Glasnevin.

Labour TD Ivana Bacik backed local opposition to plans to build 671 apartments and duplex units in Milltown Park in Ranelagh. In her submission to An Bord Pleanála, Bacik stated that the development would have a harmful effect on the quality of life of residents. She also expressed her concerns about the dominance of “build to rent” schemes in Ireland.

Fianna Fail TD Jim O’Callaghan also supported local opposition to a proposed apartment development in Ranelagh. In his submission to An Bord Pleanála, O’Callaghan argued that the scheme was “excessive”.

In January of 2020, former Labour leader Joan Burton objected to a plan to build 192 apartments in Castleknock. Ms. Burton reasoned that such a development would be harmful to both the local environment and the “residential amenity”.

In September of 2021, Fianna Fail TD John Lahart threw his support behind residents’ objections to a plan to build 140 houses and 189 apartments in Woodstown, Dublin.

In May of 2019, Independent Left councillor John Lyons voiced his opposition to a proposed scheme in Coolock due to concerns about its height.

Fine Gael leader Leo Varadkar objected to an apartment block in his constituency in Dublin Mid-West on the grounds that it was “grossly insensitive to local feelings”. He also stated that the scheme would cause traffic and negatively impact house prices in the area.

In August, 2021, Sinn Fein leader Mary Lou McDonald objected to a plan to build 1,614 apartments in her constituency. Ms. McDonald stated that she opposed the development on the basis that it was a “build to rent” scheme.

Deputy Hourigan opposed 50 apartments in Drumcondra due to what she perceived as an over-concentration of build-to-let properties in Dublin City Centre.

Fianna Fail councillor Paddy Bracken voiced his opposition against a proposal to build six council houses in a private estate in Mountmellick, County Laois. According to Cllr. Bracken, the houses in question would have inadequate parking and potentially cause traffic accidents.

He also noted that the scheme would have a “serious negative impact” on the value of nearby properties.

In June of 2021, Sinn Fein TD Paul Donnelly “welcomed” the rejection of a high rise build-to-let development in Clonsilla. Donnelly’s opposition to the plan was due to its proximity to two protected structures.

Former TD Paul Gogarty stalled plans to build 8,500 houses in south Dublin. In 2018, Gogarty lodged an appeal with An Bord Pleanála on the basis that there was a lack of transport in the area.

In 2020, the Social Democrats joint leader Roisin Shortall strongly objected to plans to build 331 “fast-track” apartments in her constituency. In her submission, Shortall stated that the development would negatively impact a nearby estate.

In October of 2021, the Irish Times reported that Fianna Fail TD, Sean Haughey, objected to a six-storey apartment scheme in Clontarf. According to Mr. Haughey, the plan was “out of character” for the area.

Independent councillor Tony Murphy registered his opposition to a proposal to build 101 build-to-rent apartments in Balbriggan town centre. He also noted his disappointment that the SHD application bypassed the local authority and went directly to An Bord Pleanála.

Other stories where there were far too many names to list out.

In November of 2020, Labour, Sinn Féin, the Social Democrats, the Green Party and independent councillors rejected plans to build 853 properties on the Oscar Traynor Road site in Coolock. Under the plan, 30 per cent of the units would have been earmarked for social housing. However, the councillors rejected this and called for ‘all units’ to be public housing.

The Lough in Cork City.

Five councillors in Cork City opposed the development of a student apartment block on the north side of The Lough.

The councillors in question were:

Their objection came on the basis that they felt it was not an ‘appropriate location’.

In 2020, 26 Cork City councillors voted against plans to build 30 apartments in the suburb of Blackrock.

This article will be continuously updated. If you feel that we have omitted a story, please feel free to contact us.