Size obviously matters in a fight. However, it is not always the deciding factor.

If the two of these men were to go head-to-head in a street fight, the trained fighter would have the advantage. The most likely scenario is that he will shock his inexperienced opponent with a quick punch or combination.

This is because an untrained fighter lacks technique and does not know how to properly defend himself. 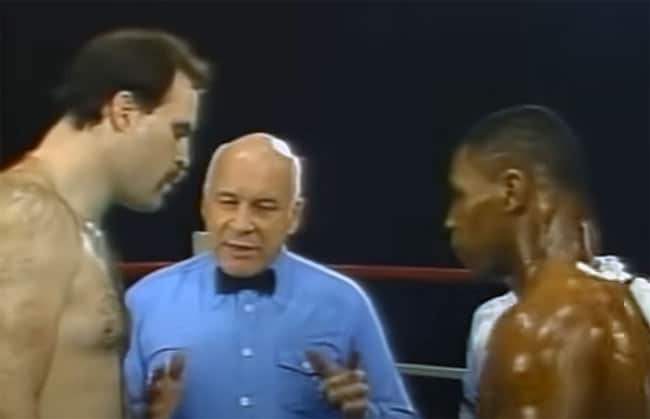 When Mike Tyson fought Sammy Scaff in 1985, he was 35 lbs lighter and 6-7 inches shorter. However, boxing experts knew that Tyson was the favorite.

Despite Scaff’s obvious size advantage, they predicted that he would be no match for Tyson’s boxing skills.

When one commentator pointed out the size difference before the fight, his colleague replied with the following:

“You know what that means to Tyson? That means that he has in front of him a very large target.”

That night, Tyson knocked Scaff out in the first round.

Size doesn’t really matter if one person is more trained than the other.

Roughly 15 years ago, I was standing outside of a nightclub when I spotted a familiar face. For the sake of this story, let’s call him John.

I knew John because we both went to school together. John was about 5’9 and weighed 150 lbs (70 kg). He was also an amateur boxer.

When I saw him that night, he was arguing with a woman on the other side of the street.

I didn’t know what the argument was about, but I could see that she was angrily pointing at him and shouting. Meanwhile, John kind of just stood there and took it.

As she was attempting to get closer to him, the woman lost her footing in her heels and landed on her backside.

Immediately after she fell, a doorman stormed out of the entrance of the nightclub and ran across the street. Judging by his face, it was clear that he thought John had pushed her.

This man was the typical “burly” bouncer. He was much larger than John. If I had to make a guess, I would say that he was at least 6 ft tall and about 200-230 lbs.

If you were to go by size alone, you would expect the bouncer to toss John around like a rag doll. However, that is not what happened.

In the blink of an eye, John struck him with a quick one-two. The bouncer didn’t dramatically fall back like people do in the movies. Instead, he kind of just collapsed forward, almost as if someone had pressed an “off” switch or plugged him out.

Moments later, he “came to”, struggled back to his feet and then ran back towards the nightclub.

The bouncer was not an experienced fighter.

Fortunately, the doorman in question was not seriously injured. Although he probably did have a bruised ego.

In this case, it was obvious that he had no formal training. This is because he blindly charged at someone with his guard down.

As soon as John spotted the bouncer running towards him, he calmly transitioned into a boxing stance, put his guard up and then waited.

If the bouncer had any fighting experience, he would have seen this as a warning sign. Instead of slowing down, putting his guard up and approaching with caution, he charged in with his chin wide open.

Consequently, John had a free shot.

During a fight, fitness can matter more than size.

If you have ever been in a fight, then you will know how quickly it can drain your body of energy.

If you are not a fit person, fatigue will set in after 20-30 seconds. Before you know it, you’re gasping for air and struggling to hold your arms up.

During a fight, fatigue will also impact you mentally. It will start to feel as though a slight breeze might push you over. As this wave of tiredness washes over you and your body screams out for more oxygen, your brain will start yelling at you to quit.

At this stage, the fight will become an endurance test.

Let’s say that there are two men with little-to-no fighting experience.

In the first 30 seconds of any fight, the bigger man has a clear size advantage. However, if he is unable to finish off his opponent inside of 30 seconds, then the fight will quickly begin to tip in favor of the smaller-but-fitter guy.

If the fight reaches this stage, size will not matter as much.

Not only will the bigger man’s punches become weak and slow, he will also struggle to protect himself.

Long story short, the unfit fighter will become the human equivalent of a punching bag.

Experience is also an important factor.

If you have never been in a proper fight before, then you are already at a disadvantage.

In your head, you have probably imagined how a “real fight” will play out. However, the reality will be much different.

As Mike Tyson once said: “Everyone has a plan until they get punched in the mouth.”

A fight can be chaotic and overwhelming. Emotions such as fear, anger and nervousness will all affect your actions. Adrenaline will also begin to rush through your body, clouding your senses and making you feel jittery.

Even trained fighters can struggle with all of this at first. However, they eventually overcome it by continuing to train and gaining more experience.

If a large-but-inexperienced man goes up against a smaller guy who has fighting experience, then his size advantage might not matter that much. This is because he is more likely to “lose his head” and allow the situation to overwhelm him.

“But they have weight classes for a reason?!”

Yes, they do have weight classes for a reason.

However, in combat sports, both fighters are physically fit, trained and reasonably experienced.

In other words, they are on an equal footing. The only factor that unfairly separates them is weight.

If you’re a “heavyweight” with no skill, then a trained lightweight fighter will school you.

The problem here is that he will see your punches coming from a mile off. Meanwhile, you probably won’t see his punches until it’s too late.

Take a look at this fight between a lightweight grappler and a heavyweight MMA fighter.

Despite being 4 inches shorter and 60 pounds lighter, the lightweight fighter wins. In fact, he does so pretty easily.

This is because of his superior skill set. Furthermore, you will also notice that the heavier fighter starts to become tired by the end of the first round.

Here is another video where the lightweight wins through skill alone.

“What if I just grab him and throw him around?”

This always sounds great in theory. However, unless you are trained in performing take-downs, it probably won’t go exactly to plan.

There are plenty of examples of professional MMA fighters being knocked out due to failed take-down attempts. If it can happen to them, it can certainly happen to you.

The layman will overemphasize height, weight and muscles.

Whenever Internet users are having a hypothetical conversation about who would win in a fight, they almost always focus on size and size alone.

“Look at the size of his muscles.” “He’s built like a tank, he will destroy him.”

For every comment about skill or experience, there are at least ten comments about size.

In 2011, Kunkli Tivadar knocked out professional wrestler Bob Sapp. Despite being 6’5 and 300 lbs, Sapp was embarrassed by a skilled opponent who was 7 inches shorter than him.

Although size does clearly matter in a fight, it is not the only factor.

For example, having bigger muscles than your opponent does not necessarily mean that you will have a stronger punch than him. This is because punching power has a lot more to do with technique than it has to do with muscles.

In other words, a trained boxer is always going to punch harder than an untrained bodybuilder. This is because mass is only one part of the equation. A powerful punch also requires momentum.

Summary: Does size matter in a fight?

Yes, it clearly does. However, so does skill, fitness and experience.

Laypersons will often overemphasize the importance of size because they have never experienced what it’s like to be in a fight.

They have never felt what it’s like to be hit by a quick punch that leaves you dazed and confused, and wondering what the hell just happened. A punch that seemingly came out of nowhere and shook you to your core.

They have never experienced how chaotic it can feel when a fight breaks out and the adrenaline starts flowing.

Similarly, they have never been in a situation where they are feeling so “gassed out” and fatigued that they can barely move their arms or legs.

If you’re a bigger fighter who is facing off against a smaller opponent, do not go into the fight with an arrogant or cavalier attitude. That will only help to level the playing field.

Likewise, if you’re a smaller fighter who is going up against a larger opponent, then do not presume that the fight is unwinnable. If you go into a fight with a defeatist attitude, then you’ve already lost.