On social media apps such as TikTok and Twitter, people will use the letters W and L to abbreviate the words “Win” and “Lose”.

For instance, if someone does something cool in a video, then a user in the comments section might reply with the letter “W”. In this case, they think that the video is a “win”.

Although these are their literal “translations”, it can be a little more complicated than that.

Over time, these Internet slang phrases have continued to morph.

Nowadays, when someone combines one of these letters with another word, the statement can take on a broader meaning.

For example, if someone writes “W car”, then it basically means that they think the car in question looks great. It might not have anything to do with that car winning an actual race.

The comment above basically translates into “Good sound, bad creator”. In this case, they believe that the sound on the TikTok video is good. However, they do not like the creator who uploaded it.

As you can see, it doesn’t necessarily have to be about winning or losing anything.

On apps such as TikTok, users will sometimes use this letter instead of the words “bad” and “terrible”.

For example, if a user replies with the phrase “L comment”, then it means that they think it’s a losing comment.

In other words, it is a bad comment and they personally disagree with it.

In one particular video, a girl joked about how she would choose her “guy best friend” over her current boyfriend.

As a result, users flooded the comment section with the phrase “L girlfriend”. 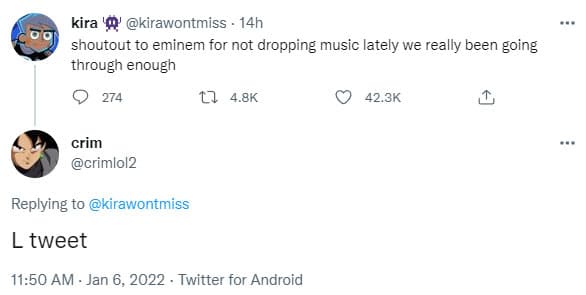 The screenshot above is from Twitter. Here, a user disagrees with someone’s negative opinion about Eminem by replying with the words “L tweet”.

W means win or winner. However, when placed beside a noun, it can mean “good” or “great”. 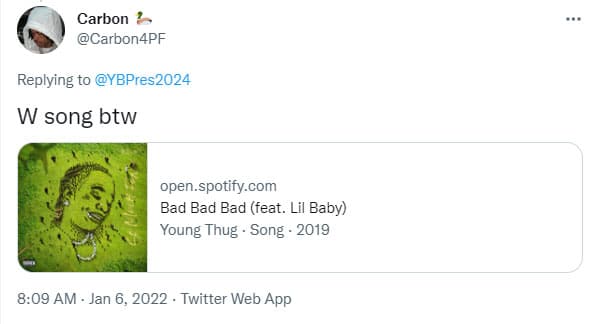 The screenshot above is another example from Twitter. In this case, “W song” translates into “win song” or “winning song”, which in turn means “great song”.

As you can see, the definitions for these two letters are pretty fluid.

However, ultimately, it boils down to W = Good and L = Bad.