On October 31st, 1974, Laura Ann Aime was attending a Halloween party with friends.

Later that night, the 17-year-old left the party by herself.

This was the last time anyone saw her alive. 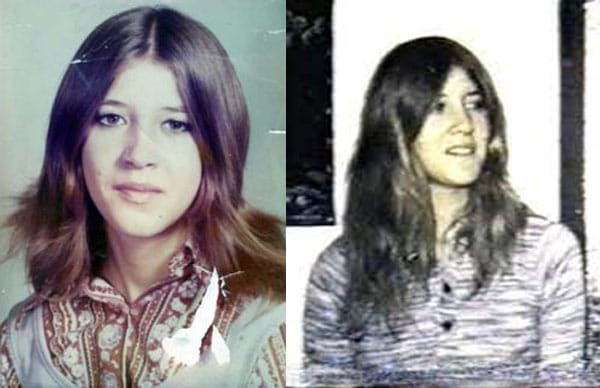 Almost a month later, on November 26th, two hikers discovered Laura Aime’s naked body on the side of an embankment in American Fork Canyon in Utah.

According to investigators, Laura’s attacker beat her, raped her and then strangled her to death.

Shortly before his execution in January of 1989, serial killer Ted Bundy indirectly confessed to the crime by not denying it.

The lack of clarity surrounding Laura Aime’s case is frustrating.

Laura Aime’s case is a frustrating one. The lack of details and conflicting reports surrounding her disappearance are somewhat maddening.

A young teenager lost her life in one of the most brutal ways imaginable, and yet we know more about her killer’s taste in alcoholic beverages than we do about her disappearance.

For example, there are three conflicting accounts of where Laura was on that night.

As you can see, there doesn’t even seem to be a general agreement on where she was on that night. In other words, one of the single most important aspects of the case is “fuzzy”.

As a result, it is difficult to trust any of the other details about Laura’s disappearance.

If you have ever lived in a small town, then you will know that “Chinese Whispers” can quickly distort the truth. As gossip spreads, more and more inaccuracies begin to inject themselves into the original story.

Over time, half-truths and speculation become accepted as “fact”.

This can cause issues when people are recalling past events. Specifically, events that occurred decades ago. Instead of simply reporting what they personally witnessed, they will occasionally include tidbits of information heard elsewhere.

A person can do this without even realizing it.

According to recent research, human memory is not as great as we like to think it is. Simply put, our memories are not a true representation of the past. As a result, they are prone to all kinds of distortions.

Therefore, we must be careful about blindly accepting people’s recollections as fact.

Who was Laura Ann Aime?

Laura was born on August 21st, 1957. She grew up in Salem, Utah and attended North Sanpete High School.

Her parents were James (Jim) and Shirlene Tolton Aime.

Laura was pretty tall. Judging by photographs and her autopsy report, she stood somewhere between 5 ft. 10 and 6 ft.

Laura Aime stood out as being particularly tall for a female.

Shortly before Laura went missing, she dropped out of high school and became a “runaway” who liked to couch surf at friends’ houses. She also worked in a number of part-time jobs.

However, despite all of this, she still remained in contact with her family. According to her parents, they were learning to accept her “nomadic” tendencies.

All in all, it seems as though Laura was a young girl who was trying to figure life out.

Laura’s transient nature might explain why her disappearance didn’t ring the same alarm bells as others.

A quick search through the Utah newspaper archives reveals no articles about Laura Aime being missing. Furthermore, we were unable to find any missing posters for her online.

Sadly, it seems as though her name only started to appear in ink after two hikers discovered her body in American Fork Canyon.

When two hitchhikers stumbled across Laura Aime’s body, the police initially believed that it belonged to missing 17-year-old Deborah Kent.

This is because Kent had gone missing from her high school in Bountiful roughly three weeks beforehand.

Furthermore, the authorities didn’t seem to be aware that Aime was missing at the time.

The newspaper excerpt above is from an article in the Corvallis Gazette-Times. Although the Utah County Sheriff’s Office was aware that Aime had gone missing in the past, they were unsure about her most recent status.

Where was she going that night?

Unfortunately, this is yet another part of the case that is unclear. All we know for certain is that she left a Halloween party by herself.

Both her reason for leaving the party and her intended destination are “hazy”.

Some of her friends recalled how Laura decided to leave because she found the party boring. Others stated that she left in order to go and buy cigarettes.

There are also two conflicting accounts of where she was planning on going to. One source says that Laura intended on hitchhiking to downtown Lehi. Another source claims that she planned on walking to a nearby park.

As you can see, there doesn’t seem to be much certainty surrounding this case.

One of Laura’s friends claims that the Halloween party took place at a cafe called the Knotty Pine. At the time, locals knew this cafe as Brown’s Cafe.

This cafe sat on West Main Street in Lehi. 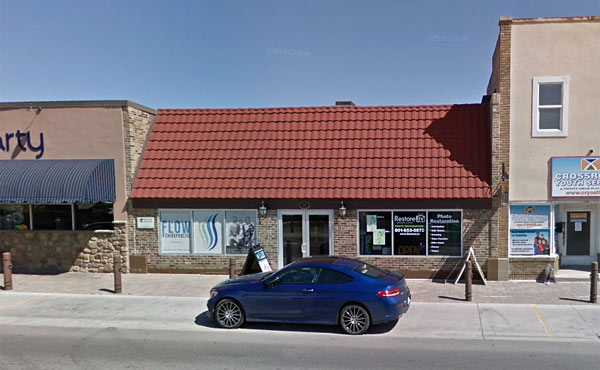 The Knotty Pine cafe used to be in this building at 130 W Main Street in Lehi.

Again, this conflicts with other information about the case.

If we dissect these details, then we can surmise that there are two opposing theories.

Judging by police reports, the most plausible theory is that Laura was at a Halloween party in Orem and decided to leave. After leaving the Halloween party, she visited the Knotty Pine in Lehi for a short period of time. Her final destination was most likely Robinson Park in American Fork.

That night, it seemed as though she was travelling from one place to the next.

It is important to note that Laura was hanging around with a relatively new group of friends at the time.

Judging by reports, these were not close friends. She had just recently met them.

Therefore, it is unlikely that they thought much of it when she suddenly went missing.

Did she know Ted Bundy?

A number of sources have said that Laura Aime knew Ted Bundy prior to her death.

According to one court document, people were willing to testify that Bundy hung around Browne’s Cafe and that he regularly chatted with Laura and her friends.

On one occasion, he supposedly stood in front of Laura in the cafe and told her that he was going to rape her.

One woman even stated that her sister saw Laura getting into Bundy’s car on the night that she went missing.

Although all of these accounts seem plausible, there are some major question marks hanging over them. Personally speaking, I find them to be a bit odd.

Firstly, while Bundy was confessing to his crimes and providing investigators with directions to some of his burial sites, he initially struggled to “place” Laura. If he truly did know her before the crime, then this wouldn’t have been the case.

Secondly, Bundy would have been 27 years old at the time. The thought of him regularly hanging around with a bunch of teenage girls in public seems pretty outlandish.

Lastly, if all of these witness accounts are true, then why didn’t his name come to the attention of the authorities back in 1974?

Following her disappearance, Laura’s family continued to wait for her to call. Because of her transient nature, they remained patient.

However, alarm bells started to ring when Laura failed to show up for a planned hunting trip with her father. According to her parents, this is not something that she would have missed.

Although we do not know for certain where Laura was or where she was going, we do know that at some stage, Ted Bundy abducted her in his Volkswagen Bug.

Bundy was living in Salt Lake City at the time, which is roughly 30 minutes away from Lehi. Furthermore, he was pretty nomadic himself and had zero issues with taking lengthy drives in order to hunt for new victims.

Judging from previous cases, it is likely that Bundy offered the teenager a lift. That, or he lured Laura into his car by asking for help and then attacked her.

Although Laura did consume alcohol on the day of her murder, she was not very drunk. Toxicology reports show that she was just over the legal driving limit.

The Medical Examiner set her death to November 20th.

To make this case even more confusing, the Medical Examiner estimated that Laura died on November 20th.

That was 20 days after her disappearance. 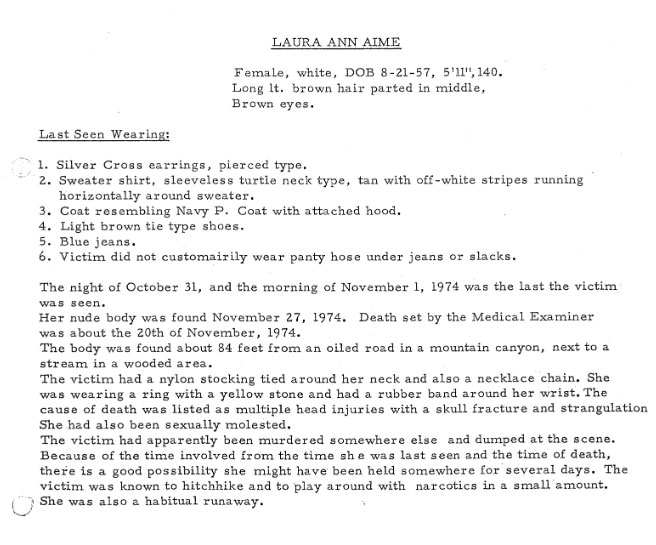 This report outlines the possibility that Laura may have been held somewhere before her death. That, or she decided to leave her new friends and was abducted at a much later date.

Did she move somewhere else for a couple of weeks? Was the coroner incorrect? Or did Bundy manage to hold her captive for 20 days?

The captivity theory is difficult to believe, as there were no binding marks on her wrists or ankles.

Laura’s murder had a particularly devastating impact on her father.

Following her death, Jim Aime was hospitalized with depression.

On one occasion, while he was driving past the area where her body was found, he blurted out: “My little baby was up there all by herself and there was nothing I could do to help her.”

When Jim Aime was called into the morgue to identify his daughter’s body, he had hope that it wasn’t her. This is because someone told him that the remains looked like they belonged to a 25-year-old.

However, Jim’s world came collapsing down around him when he noticed a scar on the victim’s arm. This scar was consistent with a horse riding injury that Laura received as a young girl.

Upon this realization, Jim let out a spine-chilling wail that stopped everyone in their tracks.

Sadly, Laura’s case is yet another example of how we often give the perpetrator far more time and attention than their victims.