Ted Bundy’s involvement in the capture of the Green River Killer has been overblown.

Although he did provide some insights into the mind of a serial killer, none of them actually helped to catch Gary Ridgway. 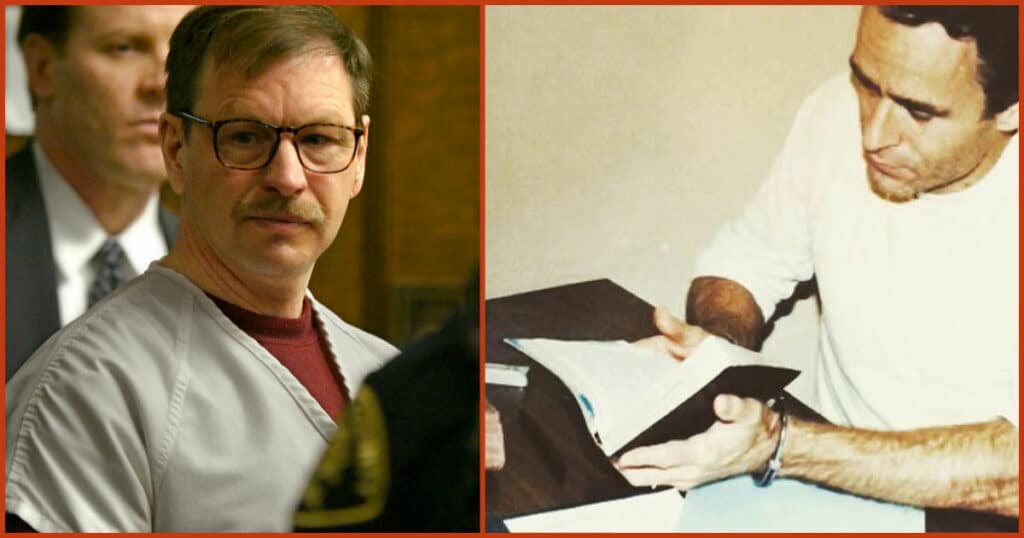 Furthermore, the insights that Bundy did provide weren’t exactly new or shocking. By that stage, the FBI’s Behavioral Science Unit had already interviewed dozens of serial killers.

Like many topics relating to serial killers, the story of Ted Bundy and “the Riverman” has been sensationalized for the sake of entertainment.

How did the police capture the Green River Killer?

The police captured Gary Ridgway in 2001. They did this by comparing DNA found on some of the victims with a hair and saliva sample that Ridgway provided them in 1987.

On November 30th, 2001, the police arrested the Green River Killer at his workplace in Renton. Two years later, he pleaded guilty to 48 murders.

As you can see, it was forensic science that led to Ridgway’s capture, not criminal profiling.

Furthermore, his arrest took place 17 years after Bundy reached out to detectives and offered them his help. By the time authorities finally caught up with Ridgway, Bundy had been dead for over a decade.

When did Ridgway become a suspect?

In April of 1983, a sex worker named Marie Malvar went missing after she jumped into a truck.

Malvar’s pimp and boyfriend, Robert Woods, noticed the truck because of how it “sped up.” From his experience, johns usually drove away slowly.

The following day, Woods and Malvar’s father went looking for the vehicle and found it parked outside of Ridgway’s house in Des Moines, Washington.

Unfortunately, this tip was not enough for the police to arrest Ridgway. He simply denied having any contact with the missing girl and there was no evidence to suggest that he was lying.

However, it did lead to him becoming a suspect in the case.

The year before, in 1982, police arrested Ridgway on a prostitution charge. This, coupled with the tip off about his vehicle, is what focused investigators’ suspicions on him.

Ted Bundy started helping the police after Ridgway had already become a suspect.

Bundy reached out to investigators in November of 1984. For a while, the incarcerated serial killer had been reading about the Green River Killer case in newspaper reports.

After receiving a letter from Bundy, detectives Dave Reichert and Robert Keppel accepted his invitation, hoping that it would lead to a relationship with him. At the time, Ted was the prime suspect in a number of older cases that they hoped to solve.

By speaking to him about the Green River Killer, they hoped that they would eventually be able to get a confession out of him about his own victims.

During their interviews with him, Bundy gave a number of insights into the mind of the Green River Killer.

Although many of his insights proved to be correct, they did not lead investigators any closer to Ridgway.

In fact, by the time these interviews took place, Ridgway was already a suspect.

He wasn’t right about everything.

Bundy was correct when he said that the killer was “very low-key and inoffensive” and that there was a good chance someone had already reported him.

He was also right when he reckoned that the killer probably had regular experiences with prostitutes before the killings started.

However, he was incorrect when he said that “the Riverman” had never married before. By the time the murders started, Ridgway had already been married twice.

His first marriage occurred when he was just 19 years old and fresh out of high school. He then married his second wife, Marcia, in December of 1973.

The FBI already knew most of these “insights”.

By 1984, the FBI’s Behavioral Science Unit was already 12 years old. From 1976 onward, the unit interviewed dozens of serial killers. Furthermore, the unit was already using psychological profiling as a tool in investigations.

For example, two years before Ted Bundy created a “profile” of the Green River Killer, FBI Special Agent John E. Douglas had already created his own one.

In his profile, Douglas was right about a number of things.

Douglas also stated that the killer was somewhere between the ages of 25-35. In 1982, when the murders first started, Ridgway was 33 years old.

As you can see, the FBI was already pretty close to the mark in regards to the psychological profile of the killer. However, a profile is not evidence. Instead, it is merely a tool that aims to help the police narrow in on suspects.

Bundy’s impact on the Green River Killer case is overblown.

If you look at the facts above, it is difficult to see how Bundy had any meaningful impact on the Green River Killer case.

Despite this, documentaries, movies and TV shows have continued to sensationalize his influence on the case for the sake of entertainment.

This is similar to how Bundy’s intelligence is often exaggerated for the sake of drama.