Here are some screenshots of the old Movie Magic website, which no longer exists. Movie Magic was a rental chain that existed in Ireland up until about 2007 or so. While I was mucking around in my early teens, Movie Magic was the store I’d visit whenever I wanted to rent a PlayStation game or a movie. This was back in the good old days when you’d rent a VCR and then curse the person who had it last because they had been too lazy and ignorant to rewind the goddamn thing.

Movie Magic is a 100% Irish owed & run video store. We have been operational for 15 years and there are currently over 90 staff on our Movie Magic Team at the moment. A pixelated image is all that remains of this mythical store.

Stumbling upon the website is like stepping back in time. As soon as you land on the home page, you are greeted by a wonderful flashing logo, a tasteful clouded background and navigational buttons that rotate whenever you hover over them. If you look at the source, you can see that that the site was generated with Microsoft FrontPage 5.0, which was a WYSIWYG “website editor” that Microsoft officially discontinued after Office 2003.

Unfortunately for those of us who are fond of taking trips down memory lane, the pictures of the actual store are too tiny and pixelated to make out some of the finer details. However, you can still feel the “yellowness” of it all and the Top Ten rental chart do provide us with a nice snapshot of the exact moment when the company ceased functioning properly. After browsing the site and soaking up all of the nostalgia, I decided to try and figure out what had actually happened to the company. To my dismay, I failed to find any news reports about its closure and the only real information that I could glean from all of my sleuthing was that it had officially dissolved as a legal entity back in 2008. If you have any further information about why Movie Magic in Ireland decided to shut up shop and close its doors, please make sure to post a comment in the comment section below. 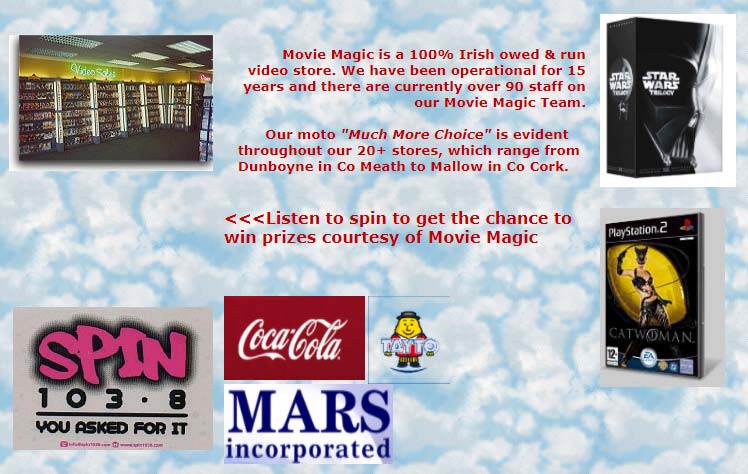