This is a guide to some of the most popular acronyms that you will come across on Snapchat.

Although many of these slang phrases are also used outside of Snapchat, you will find that a lot of them are very specific to the app. 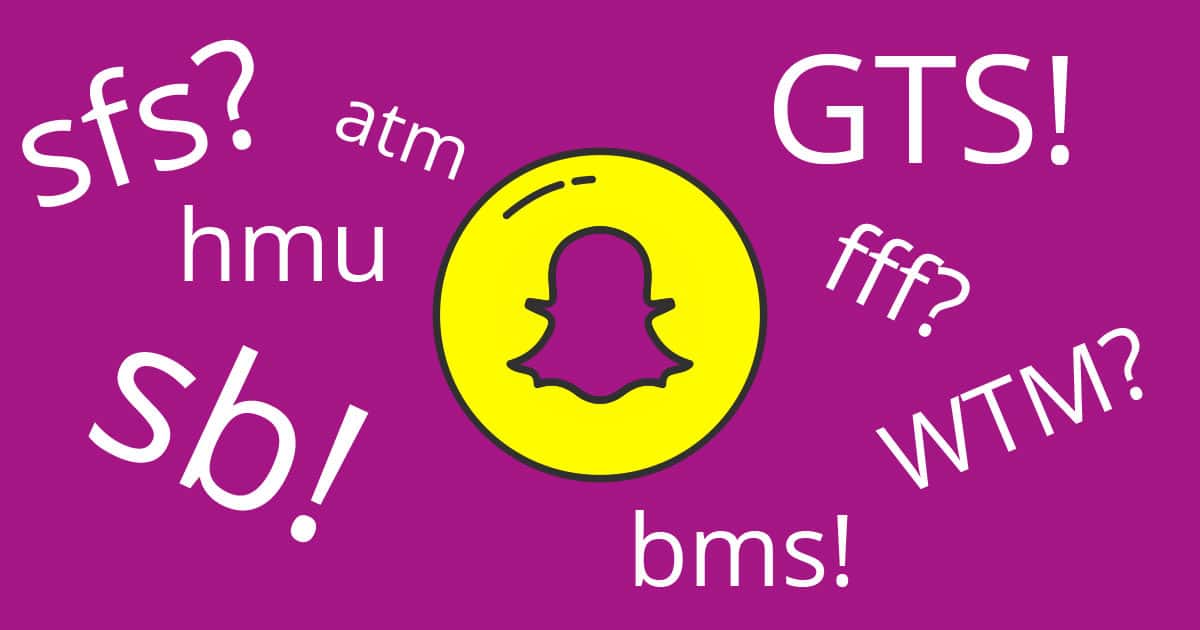 What does “atm” mean on Snapchat?

On Snapchat, the acronym “atm” usually means “at the moment”.

For example, “I am busy atm” or “I’m feeling really lazy atm”. Typically, it has nothing to do with the bank machine that you take money out of.

What does “sfs” mean?

SFS means “shoutout for shoutout”. In the context of Snapchat, this usually means that the person in question will mention your username in their Snapchat story if you return the favor.

In other words, they’ll promote your account if you promote theirs. By doing so, you can both increase your follower counts.

What does “sb” mean?

SB means “snap back”. Basically, they are asking you to reply to them and snap them back. If they say “don’t sb”, then it means that they do not want you to reply.

In certain cases, you might receive a message such as “streaks, don’t sb”. This is basically their way of telling you that they are only snapping you in order to keep a current Snapstreak going.

It’s kind of like saying, “Don’t mind me, I’m just keeping our streak going. However, I’m not really in the mood for a conversation.”

Some Snapchat users will sarcastically put “don’t sb” on their story. This is usually after they’ve posted an opinion that some of their friends might find controversial. In a way, it’s like saying “don’t @ me” on Twitter.

That or they are feeling moody and want to make sure that everyone knows.

What does “smh” mean on Snapchat?

SMH is an acronym for “shake my head”, which is a way of expressing disappointment or disapproval about something.

For example: “Why do I have to go to work on Monday smh”.

In certain cases, you will find that the person is using SMH sarcastically. For example: “You mean I have to work every week until I retire? smh”

What does “hmu” mean on Snapchat?

HMU means “hit me up”. This is just another way of saying “Get in touch with me” or “contact me”.

What does “su” mean?

SU is an acronym for “swipe up”. On Snapchat, users can attach a website link to their story. However, in order to visit the link, users must swipe up on the story in question.

This acronym is popular among “influencers” who are trying to promote a product. They also use it to advertise their social media profiles on other apps such as Instagram and TikTok.

What does “ft” mean on Snapchat?

FT is short for “Face Time”. Aka video chat. For example, if someone posts “hmu for ft” on their story, then that means that they are looking for someone who is interested in doing a video call.

This “Face Time” is typically done using Snapchat’s “Video Chat” feature. As a result, there is no need to download the iOS FaceTime app.

What does “otp” mean on Snapchat?

OTP means “one true pairing”. It is basically a trend that has become popular over the years. This trend involves writing “otp” on a photograph of a couple (in many cases, this couple will be two celebrities who aren’t together).

Essentially, when someone writes “otp” on a photograph of a couple, it means that they think these two people would make “the perfect couple”.

As you can imagine, people will sometimes use this acronym in a sarcastic fashion in an attempt to mock their friends.

What does “ss” mean?

Typically, on Snapchat, the acronym “ss” means “screenshot”. For example: “why did you ss my story?”

What does “stg” mean?

STG means “Swear to God”. This can mean various things, depending on the context. Most commonly, this acronym is used to express annoyance.

For example: “stg laura needs to stop annoying me”.

Others may use it to highlight their sincerity: “stg man, I didn’t say anything to anyone.”

What does “gts” mean on Snapchat?

For example, some people will add memories to their Snapchat stories and then caption them with “gts”.

This is their way of saying that the photo reminds them of good times.

What does “wtm” mean on Snapchat?

WTM is an acronym for “What’s the move?” People usually use this in their captions when they want to know what everyone is doing.

In other words, what are everyone’s plans for tonight? For example: “wtm? Are we heading to the club tonight or what?” They are fishing for information on what is happening.

What does “fff” mean?

To be honest, this is just a cheap way for them to try and increase their Snapchat follower count.

What does “snr” mean on Snapchat?

SNR stands for “streaks and recents”.

“Recents” are people who the person has recently sent snaps to.

“Streaks” are people that the person currently has Snapstreaks with.

For example: “That’s a nice photo. I might send that to my SNR.”

What does “fw” mean?

FW is an acronym for “f*cks with”. It basically means that the person likes a certain thing or person. For example: “i fw rock music” basically translates into “I like rock music.”

Generally, it is used to express a fondness for something or someone. Another example would be “i fw dave”. This means that they personally like Dave.

What does “bms” mean on Snapchat?

BMS is an acronym for “broke my scale”. If someone sends you this, it means that they think you are beautiful.

This has nothing to do with a person’s weight or anything like that. It just means that, on a scale from 1-10, they think you’re “off the scale”. If someone replies to your selfie with “bms”, you should take it as a compliment.

What does “ifk” mean?

Basically, yes, they do know… and yes, they’re just as shocked or annoyed about it as you are. They are agreeing with you.

What does “hru” mean?

HRU is an acronym for “how are you?”

What does “jw” mean?

Basically, they just asked you a question for the sake of making conversation.

What does “mbn” mean?

MBN is an acronym for “must be nice”. More often than not, it is a polite way of expressing envy. i.e. They would love to be in your situation.

For example, if you’ve recently added a Snapchat story of yourself lounging on the beach and someone replies with “mbn”, then it obviously means that they’re envious.

In other words, they’d love to be in your shoes right now.

What does “ig” mean?

IG is a tricky one, as it can mean two different things. It all depends on the context.

IG can stand for either Instagram or “I guess”.

For example, if you ask someone a question and they say “yea, ig”, then it is likely that they’re saying “yea, I guess”.

It all depends on the context of the conversation.

“my ex blocked me on IG”

“oh really? sorry to hear about that. it was probably for the best though”

What does “ion” mean?

ION is an acronym for “In other news”. This phrase is typically used to change the topic of conversation. Example usage:

“Yea, I really hate the place that I work in. I’m looking for another job right now. Anyway, ion, me and my friends booked a trip to Cancún! I can’t wait.”

A lot of people will use ION when they feel as if they have been dwelling on the same topic for too long. Sometimes, it’s a case of them realizing that they could be boring you with it.

If you have a question about any of these acronyms or you think that something is missing from the list, feel free to leave a comment below.