This is a guide to the hourglass emoji on Snapchat (⌛). The hourglass (aka the egg timer) emoji will appear beside a friend’s name if your Snapstreak is about to expire. As a result, it is usually only shown if the contact in question already has a fire emoji beside their name. 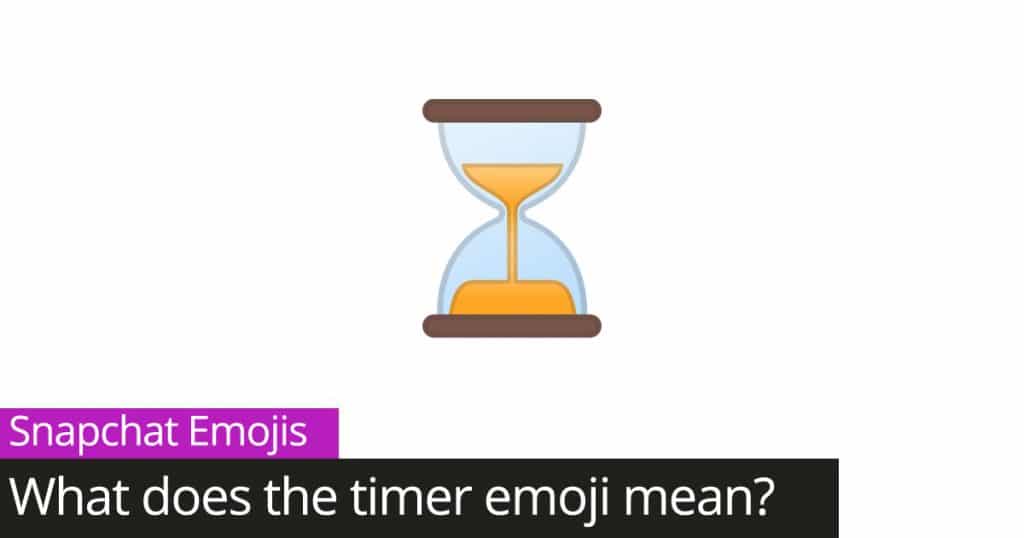 The hourglass emoji serves as a reminder that your Snapstreak is close to ending.

This emoji serves as a warning. In other words, it is Snapchat’s way of warning you that your current Snapstreak is about to come to an end.

For a Snapstreak to continue, you both must snap each other at least once every 24 hours. If either of you fails to do so, the streak will come to an end.

In the example above, you can see that there is a 3, a fire emoji and an hourglass. This means two things:

In this case, you can see that I have sent Lisa a snap. i.e. I have done my part. Now, in order for the streak to continue, she will have to send me one back. Otherwise, the streak will expire.

I have already sent them a snap? Why is the hourglass still there?

That may be the case. However, have they sent you a snap in the last 24 hours? Remember that a streak can only continue if you both send one. Consequently, you cannot continue a streak by yourself. It is a team effort.

If you have both recently sent each other snaps and the hourglass is still appearing, then it could be a cache issue. i.e. Snapchat might not have updated the friend emojis yet. In this case, you should probably just give it some more time. If you are impatient, then you could try logging out and logging back in again. Doing so could force the app to “refresh” the emojis.

How long does the hourglass emoji last before the Snapstreak has ended?

Typically, the hourglass emoji will appear when there are 4 hours left on a Snapstreak. In other words, it will be displayed if either of you haven’t sent a snap to the other person in 20 hours.

How long does it take the hourglass emoji to disappear?

In my personal experience, this hourglass / egg timer may last for a while after the Snapstreak has already ended. The problem with “friend emojis” on Snapchat is that they often don’t update immediately. Most likely, this is due to caching. That, or Snapchat only “updates” the expired streaks at certain intervals.

The hourglass disappeared after I snapped them?

As mentioned above, Snapchat will often “cache” these emojis. If the hourglass emoji disappeared after you sent them a snap, then it is likely that the Snapstreak had already ended. It’s just that the app hadn’t removed it yet.

By sending a snap to someone, you are essentially forcing Snapchat to “recalculate” or “refresh” your friend emojis. Obviously, in your case, the app did a refresh and determined that the streak in question was over. As a result, it immediately removed the hourglass.

Can both people see the hourglass emoji?

Yes, both people can see the hourglass / egg timer emoji. It is a shared warning to the both of you that your beloved Snapstreak is about to come to an end. It is Snapchat’s polite way of saying “guys, one of you need to do something about this.”

And that’s it! Hopefully, this guide answered any questions that you had. If you’re interested in reading about the meaning behind some of Snapchat’s other emojis, then you should check out the following guides: