Snapchat users are reporting that they can no longer see their friend’s Snapchat score going up.

That or the score is going up “too slowly”. In other words, the Snap score is increasing in “batches”, almost as it is updating at certain points.

This “bug” seems to have appeared after the Snapchat update in August of 2020.

Since then, social media has been awash with complaints from anxious girlfriends who can no longer keep “tabs” on their boyfriend’s Snapchat activity. 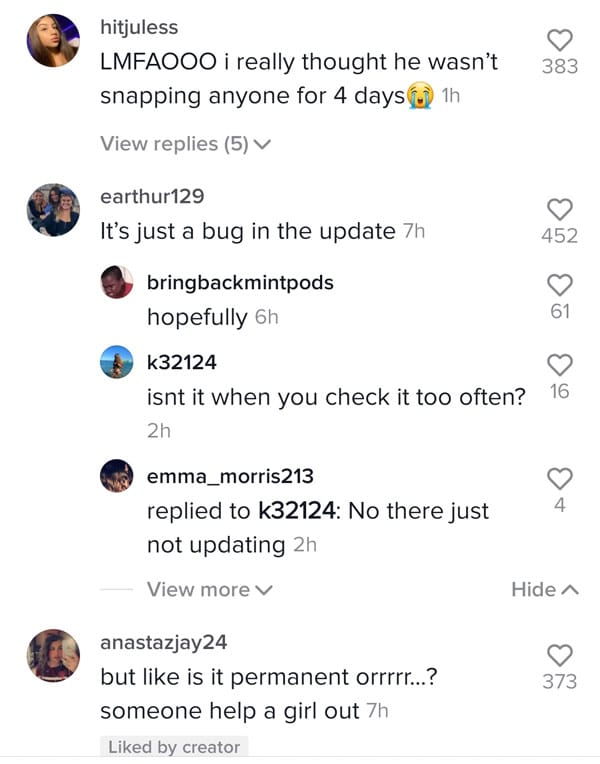 TikTok users complaining about how they can no longer see people’s Snapchat scores going up.

As you can see, this is causing certain people a lot of stress and anxiety.

What does it mean when someone’s Snapchat score isn’t going up?

As of yet, there is no official explanation for this behavior. However, we do know the following:

OK. So why is this score not going up straight away?

There are three possible reasons why this is happening.

It is possible that this behavior is being caused by some sort of bug that found its way into the latest update. For example, the code that downloads a user’s profile information might not be running as often as it should be. Or perhaps Snapchat’s servers aren’t compiling the user’s recent activity into a score quickly enough. Or maybe the cache on the app isn’t working correctly.

As you can see, there are a number of things that could have broken since the last update.

Snapchat is caching user information for longer periods of time.

Another possible explanation is that Snapchat is intentionally caching this score for longer periods of time. In case you didn’t already know, a “cache” is a type of temporary storage that is used for performance reasons. For example, Snapchat could be trying to reduce the number of requests that its servers have to process.

Many users have reported that their partner’s Snapchat score suddenly went up by a lot. i.e. It stayed the same for a while and then increased by a large amount.

This to me suggests that this behavior is due to some sort of cache that is in place.

This cache could exist on the phone. It could also be saved on an a server that sits halfway between the app and Snapchat’s database. In other words, clearing your app’s cache data might not work in this case (although it might be worth a try, for the sake of science and all of that).

This is by design.

Snapchat could have become wise to the fact that people were using this Snapchat score to track other people’s activity on the app. If this is the case, then it is possible that this “delay” is actually a feature. In other words, Snapchat added this delay in order to protect other people’s privacy.

If that is the case, then your counting days could be over.