“The Sopranos versus Breaking Bad: which one is better?”

This is one of those controversial questions that will often cause flame wars on the Internet.

Firstly, let me start out by saying that I love both of these shows. I have re-watched “The Sopranos” and “Breaking Bad” on multiple occasions. In my opinion, there is no massive gap in quality between the two.

They are both extremely enjoyable to watch if you are a fan of crime dramas. Or even just dramas in general.

If you like one of these shows, then you are practically destined to like the other one.

However, having said all of that, I still believe that The Sopranos is better than Breaking Bad. 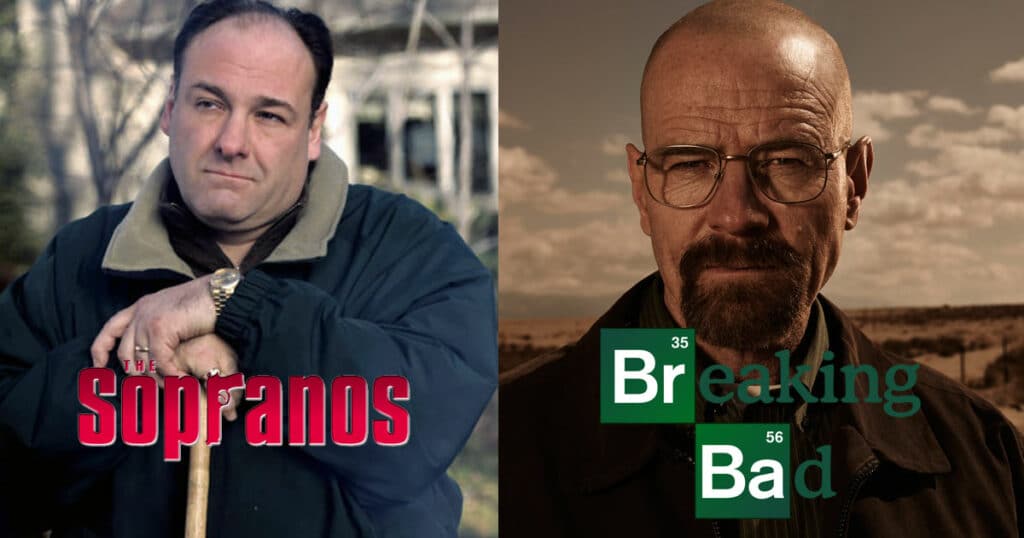 In my opinion, The Sopranos is an all-round better show than Breaking Bad.

Why is The Sopranos better than Breaking Bad?

These shows are so close in terms of “enjoyability” that it can be difficult to spell out why one is better than the other.

However, I will give it my best try.

The characters have more depth.

The characters in The Sopranos are more polished. They have depth. They feel more realistic and complex.

Even the smaller characters are interesting.

On the other hand, some of the characters in Breaking Bad come across as “cartoony”.

If that is the right word to use.

For example, with the exception of Mike, Gustavo Fring’s drug enforcers are the same type of stereotypical henchmen that you can find in any other TV show.

Besides staring intimidatingly and saying things in a gruff, bad-tempered voice, there just isn’t much else to them.

Tony Soprano is also a better character than Walter White. Although I loved how Walter slowly transitioned from being a dorky and likable chemistry teacher into a narcissistic drug lord who everyone hates, I still don’t think that he matches up to Tony Soprano.

There are so many small things about Tony that make him such a memorable and interesting character. From his heavy breathing to that angry smile that appears on his face when he’s seconds away from losing his cool.

He is unstable and impulsive. You can hate him in one scene and then love him in the next. He is in a constant state of battle with himself.

All in all, Tony is just more compelling.

I know what you are thinking. “It’s a TV show, it doesn’t have to be realistic!”

And I understand that.

However, The Sopranos manages to stay enjoyable while maintaining a sense of realism.

And for that, it deserves extra credit.

When it comes to Breaking Bad, it feels as though certain story lines are too far-fetched. Furthermore, every scene has an extra bit of drama sprinkled on top of it.

In comparison to The Sopranos, Breaking Bad’s music, cinematography and dialogue can all feel a bit over-the-top at times.

To sum it up: Breaking Bad has to fight for my attention, and it does so successfully. However, The Sopranos just has my attention.

The first season of Breaking Bad is weak.

Whenever I re-watch Breaking Bad, I will often skip season one.

In my opinion, it is slow and it just doesn’t have the same quality as the seasons that follow.

I do not have this kind of problem with The Sopranos. I can watch it all the way through, from the start of season one to the end of season six.

In Breaking Bad, there are parts of season one where Bryan Cranston seems more like Hal from Malcolm in the Middle than Walter White. Especially the scenes where he is running around in the desert in his underwear.

Basically, season one comes across as too comedic and “cheesy” for a crime drama.

In the last eight years, I would say that I have “re-watched” The Sopranos twice as much as Breaking Bad.

There are so many great scenes in The Sopranos that I could spend hours watching hundreds of small clips of the show on YouTube. It doesn’t matter if something exciting is happening or if they’re all just sitting around a table talking. Nearly all of it is compelling and nuanced.

On the other hand, with Breaking Bad, it feels as though the greatness of the show is confined to fewer scenes.

In other words, the “regular” bits in-between the exciting parts just aren’t that interesting to watch.

The Sopranos and Breaking Bad are both terrific pieces of entertainment. The fact that this question took me a while to think about just goes to show how close they are in the grand scheme of things.

However, when push comes to shove, there is only one winner in my mind.

And that is The Sopranos.