In March of 1975, investigators discovered her fractured skull on Taylor Mountain. 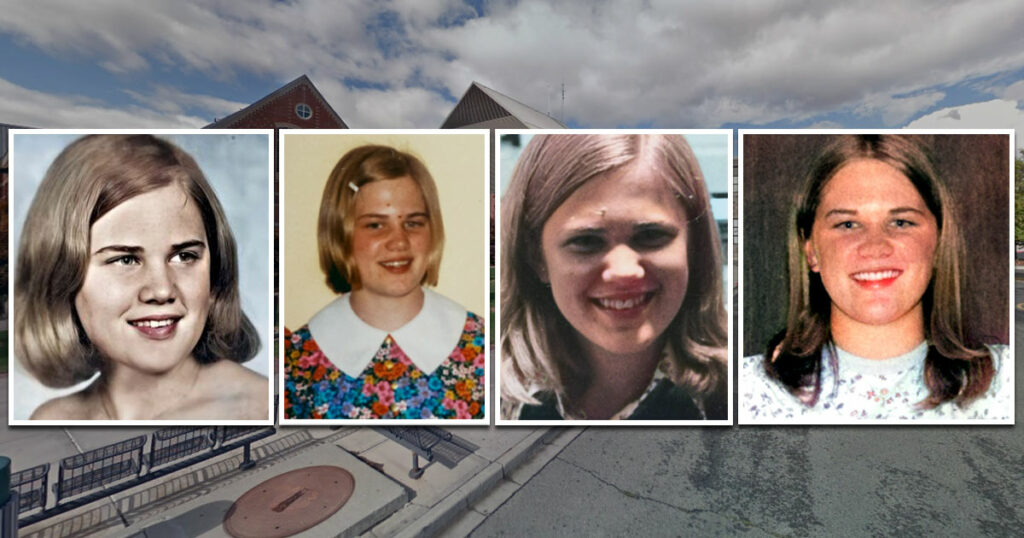 Susan Elaine Rancourt was a freshman student who was majoring in biology. She was 5 feet 2 and 118 lbs. Unlike most of Bundy’s other victims, Susan had blonde hair. According to her family, she was a bright, inquisitive and studious young woman who excelled at school and loved reading.

Shortly before 8 p.m, Susan Rancourt was washing her clothes in the communal laundry room of her dorm building. After switching on the washing machine, she left to attend a meeting at Munson Hall. 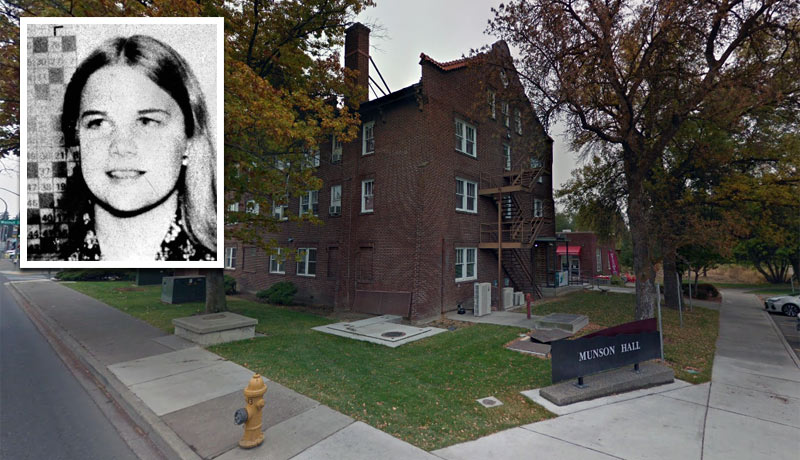 A Google Street View image of Munson Hall from 2018.

The meeting in question was for undergraduates who had an interest in becoming resident assistants. A role which among many other things, involves helping other students and ensuring their safety.

At 10 p.m., the meeting finished and Susan left Munson Hall to return to the laundry room at her dorm. She also had plans to meet up with a friend afterwards and watch a movie.

Because Susan did not retrieve her clothes from the laundry room, it is clear that she never made it back to her dorm at Barto Hall.

According to investigators, the most plausible scenario is that Ted spotted Susan shortly after she left the meeting at Munson Hall.

Judging by witness accounts, he was wearing a fake sling and trolling around the campus in search of a victim.

After Bundy noticed Susan walking by herself, he wandered over in her direction. Then, once he was close enough, he pretended to struggle with a stack of books that he was carrying.

In this particular case, it is likely that he dropped the books in front of her.

When Susan saw this “injured” man struggling, she did what most people would do and asked him if he needed any help. An aerial photograph which shows the route that Susan Rancourt took that night. At the time, a railway line cut through the campus. Detectives believe that Bundy parked his car near a railway trestle opposite Black Hall.

After Susan agreed to help Bundy carry his books, the pair walked up the pathway on the western side of the library before turning right towards Chestnut Street. At that point, they crossed the road and headed north towards the railway trestle where Bundy parked his car.

He attacked her with a crowbar.

As Susan was leaning over and trying to place the books into the Volkswagen Beetle, Bundy seized on the opportunity and struck her over the head with a crowbar. He then lifted her unconscious body into his car and drove away. 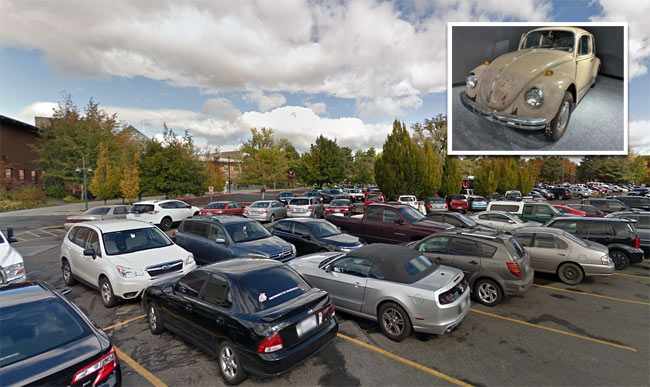 This is the location where Ted Bundy abducted Susan Rancourt. Nowadays, the trestle no longer exists.

In 1974, the area in question was dark and deserted. Therefore, it is likely that he scoped out the campus beforehand and determined that the railway trestle was the most suitable spot to carry out an abduction. 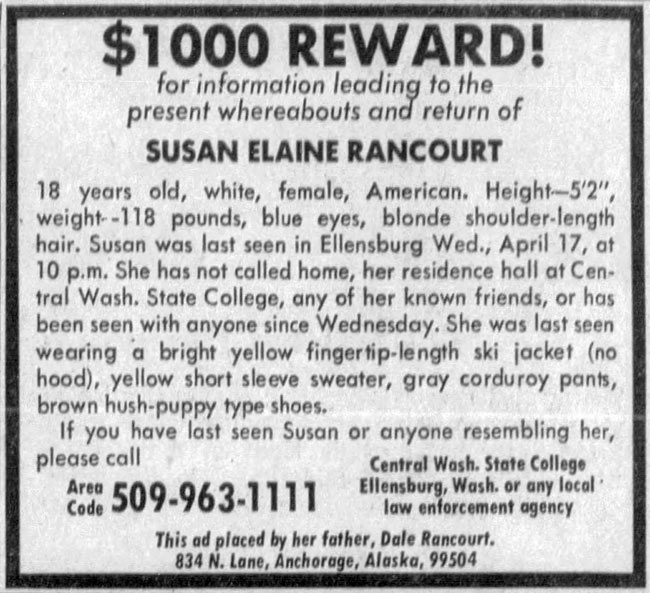 Her friends and family were quick to raise the alarm.

When Susan Elaine Rancourt failed to return to her dorm that night, her friends and family immediately became worried.

Unlike Donna Gail Manson, Susan was not the type of person who would take off without telling anyone. She was not an adventurous “free spirit” who liked to hitchhike. Instead, she was rather “safe” and “predictable”.

Not only did Susan fail to meet her friend that night, all of her clothes were still in the laundry room. Furthermore, none of her identification cards were missing from her dorm.

At the time, the young college student was preparing for her midterm finals. According to those who knew her, Susan was a studious young girl who never skipped class.

In their mind, there was no way that she would willingly miss an important exam.

The police were unable to find any clues.

Although the police were quick to retrace Susan’s steps, interview multiple people and put out an all points bulletin, they were unable to find any trace of the missing co-ed.

According to the Dean of Students, Robert Miller, campus security didn’t have a ‘shred of evidence’ about what happened to her. 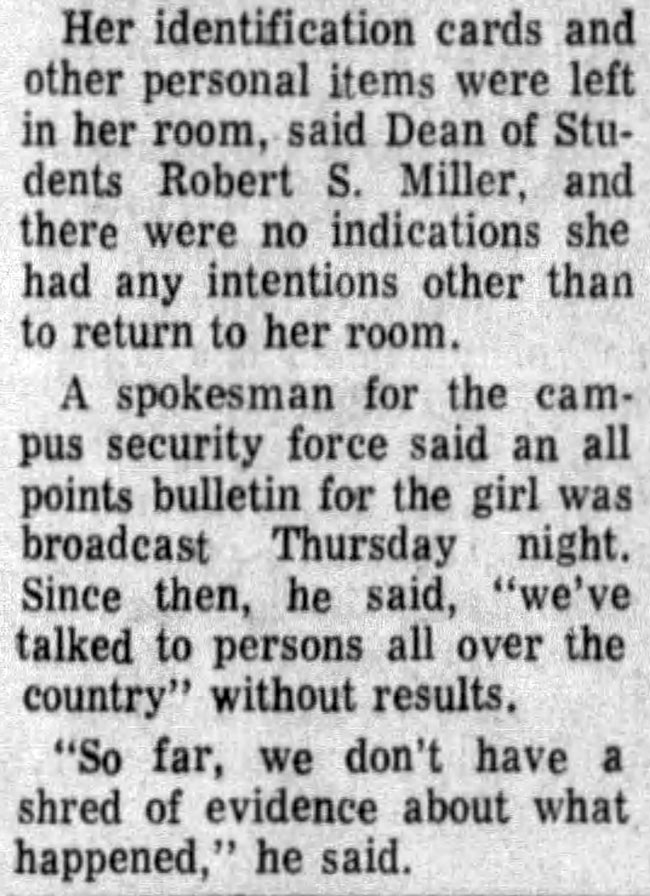 A newspaper clipping from The Spokesman-Review. Published on 22nd April, 1974.

That week, Dale and Vivian Rancourt flew in from Anchorage in Alaska to aid the search for their missing daughter. 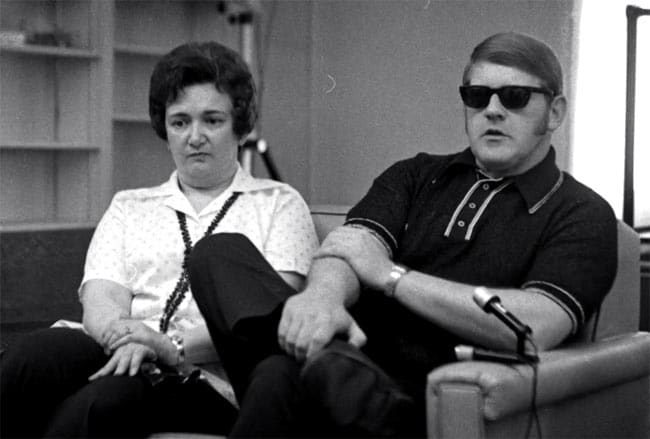 A photograph of Vivian and Dale Rancourt. According to Vivian, her husband started yelling “My daughter’s missing. Something has happened.”

From the offset, they were adamant that someone had abducted Susan.

“We believe Susan was abducted because she was always a very logical and predicable person. Very predictable. If it was one of my other children, I’d say just stand by, they’ll be back in two or three days. But not Susan. She was always very careful.”

The search for Susan Rancourt was fruitless.

In the aftermath of Susan’s disappearance, the CWSC police and officers from the Kittitas County Sheriff department carried out an intensive search of the campus and the wider Ellensburg area. 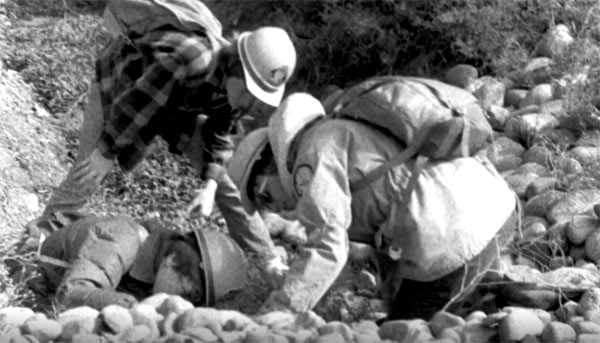 The scouts inspected alleyways, fields, sheds and even manholes.

At the same time, Susan’s family flew a private airplane over the area in the hope that they might spot her distinctive yellow jacket from above.

Unfortunately, there was no trace of the missing college student. Nor were there any clues to suggest what might have happened to her.

Subsequently, on May 3rd, the authorities decided to end the three-day operation.

A worrying trend was beginning to emerge.

By May of 1974, both the authorities and the media were starting to notice a worrying trend.

In the space of four months, Lynda Ann Healy, Donna Manson, Susan Rancourt and Roberta Parks had all gone missing from the Pacific Northwest area.

The four victims were young college students between the ages of 18 and 21. Furthermore, all of these women had disappeared from college campuses that were close to highways.

In May of 1974. Thurston County detective Paul Barclift started to contact other law enforcement agencies and ask them if they had any similar cases.

On July 3rd, 1974, representatives from multiple law enforcement authorities in the Washington state area met to discuss the cases. Although they had no proof that a crime had taken place, they found it worrying that so many young women were going missing.

At that stage in the investigation, the only thing linking the disappearances together was the complete lack of evidence in each case.

Bundy was in Ellensburg at the time.

Ted Bundy’s childhood friend Terry Storwick was living in Ellensburg at the time when Susan Rancourt went missing. According to Storwick, Ted paid him a brief visit at some point before May 2nd, 1974.

Although he was unable to remember an exact date, his statement does put Bundy in the area around the same time that the young college student disappeared.

In the days leading up to Susan Elaine Rancourt’s disappearance, Bundy attempted to abduct two other women from the CWU campus.

However, on both of those occasions, the students in question sensed that something was off about the “injured” man. 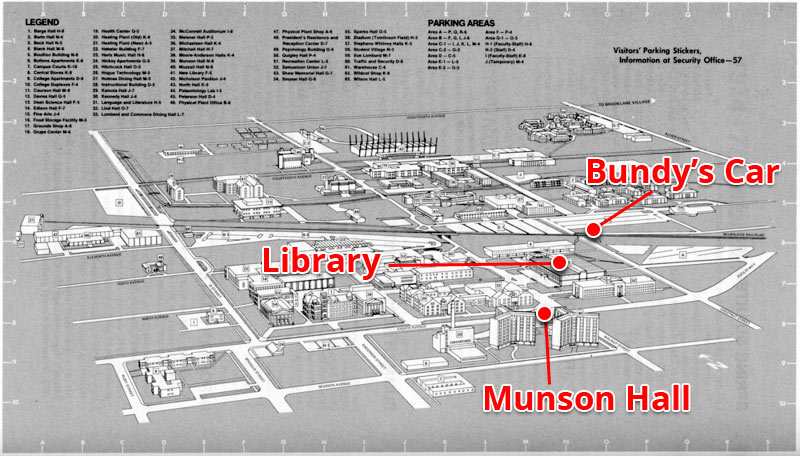 A map of Central Washington University from 1974. In this image, you can see the railway line that cut through the campus.

Five days before Rancourt went missing, a man in a sling asked a woman on campus if she could help him carry his books to his car. According to the witness, the man seemed “nice”. However, once they reached his Volkswagen Beetle, she noticed that the passenger seat was missing.

At that stage, she started to feel uneasy about the situation. Consequently, she placed the books on the top of his car and promptly left.

An hour or two before Susan vanished, Bundy tried his injury ruse on another woman called Kathleen D’Olivo. According to D’Olivo, the man had a sling and was standing outside of the college library. Once again, he was dropping his books and pretending to struggle. 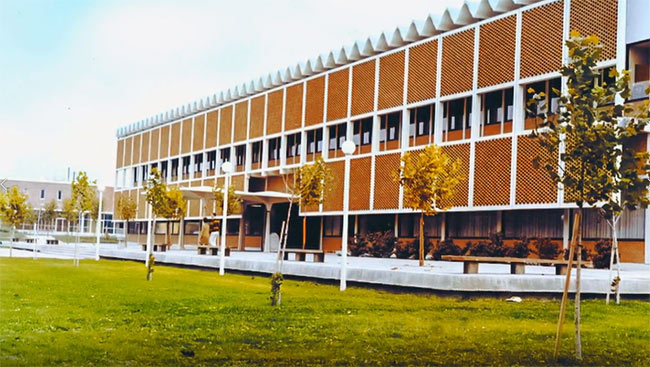 A photograph of Bouillon Library. These days, people know it as Bouillon Hall.

After agreeing to help Bundy, D’Olivo accompanied him to his Volkswagen Beetle. At the time, he had parked his car in a dark area beside a railway trestle, which was across from Black Hall.

Once they reached the car, the man dropped his keys and started to look for them.

After fumbling around in the dark for a couple of seconds, he asked Kathleen if she could help him to find them.

However, by that stage, Kathleen was starting to feel suspicious about the encounter. According to D’Olivo, the man seemed “weird” and the sling that he was wearing didn’t “look too professional”. Furthermore, he had just led her to one of the darkest spots on the campus.

Instead of bending down in front of this stranger, she attempted to put some space between the two of them by suggesting that they should both “step back” and look for the keys.

Fortunately, for D’Olivo, this worked. Once they stepped back, she spotted the keys and was able to pick them up off the ground while maintaining a safe distance. After that, she handed him his keys and left.

Sadly, Susan was not as lucky.

It’s possible that he returned to CWU again.

According to a newspaper article in the The Spokesman-Review, another woman reported that a similar incident occurred on April 21st. That was four days after the abduction of Susan Elaine Rancourt. 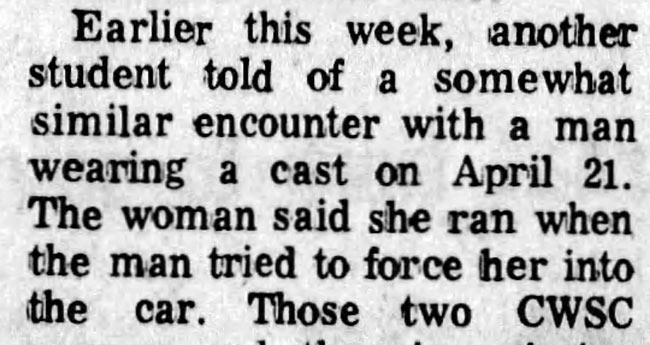 “The woman said she ran when the man tried to force her into the car.” Published on August 2nd, 1974.

If this account is true, then it means that Bundy returned to the campus to hunt for another victim.

The discovery of Susan’s remains.

The skull belonged to Brenda Ball, a 22-year-old woman who had vanished in June of 1974.

This gruesome discovery led to a full-scale investigation of the area.

The following day, King County detective Robert Keppel was searching the site when he tripped over a branch and stumbled a second cranium.

The skull in question had a large fracture. Exposure to sunlight had also bleached it.

According to Keppel, he knew almost immediately that it belonged to Susan. Unlike the other victims, she had a lot of bridgework done on her teeth.

During a search of the site, the ESAR team also discovered a piece of a yellow jacket.

Before his execution in 1989, Ted Bundy confessed to the murder of Susan Elaine Rancourt.

Following Bundy’s confession, Dale Rancourt stated that his daughter’s brutal murder was a puzzle that had ‘vexed’ the family for many years.

In his words, there were only two pieces of the puzzle left.

The first piece was Bundy’s confirmation that he had murdered their daughter. The second was Bundy’s execution.

On January 24th, 1989, Ted Bundy was strapped into an electric chair and executed.