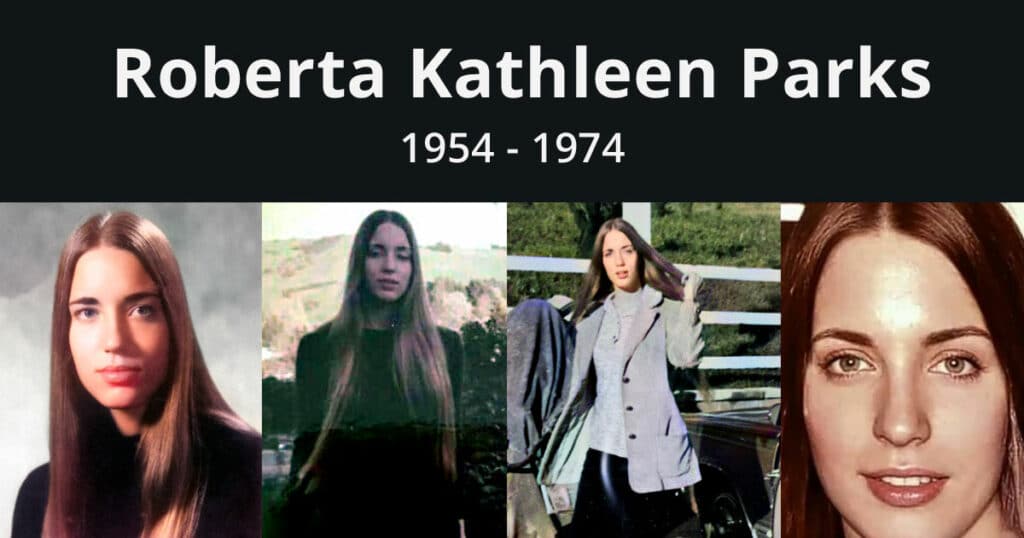 Ted Bundy victim Roberta Kathleen Parks was a 20-year-old university student from Lafayette, California. She was 5′ ft 7″ and 125 pounds with waist-long brown hair. Although she was majoring in “Religious Studies” at the time, she still wasn’t sure what she wanted to do with her life.

Up until the gruesome discovery at Taylor Mountain, the media typically avoided grouping Roberta in with the other missing girls.

The other women were abducted from the Seattle area. Meanwhile, Parks had disappeared from a university that was 250 miles away.

To many, the link between Roberta and the other victims was unconvincing because of the distance involved. There were also lingering questions about whether or not she had run away.

According to King County detective Robert Keppel, he initially found it difficult to believe that the killer they knew as “Ted” would venture so far outside of his “hunting territory”.

Consequently, the discovery of Roberta’s skull among the remains of Brenda Ball, Susan Rancourt and Lynda Healy came somewhat as a surprise to investigators. 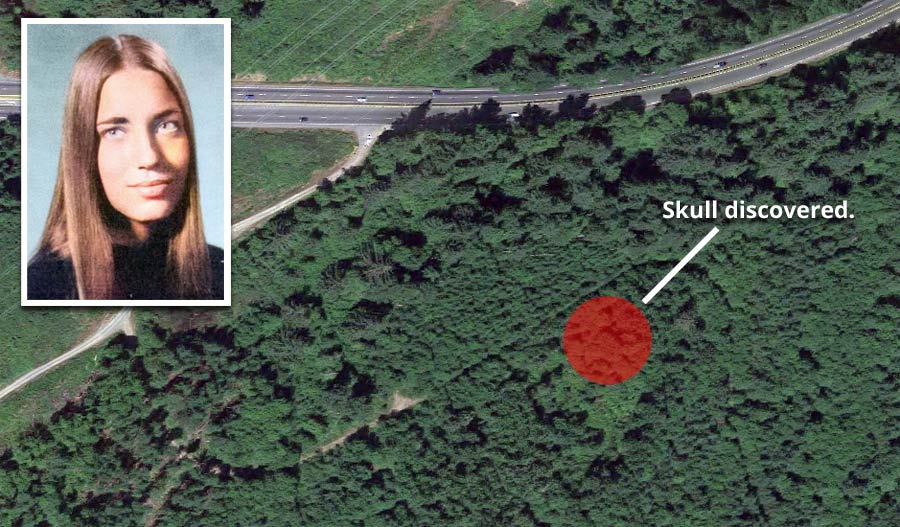 The young woman’s skull was discovered in a forested area on Taylor Mountain.

Up until that point, they believed that the killer was focusing his efforts on the Seattle area.

However, it was now becoming clear that “Ted” was willing to travel outside of his comfort zone.

Roberta wasn’t happy at the time of her disappearance.

Roberta Parks was pretty unhappy at the time of her disappearance. Not only was she constantly butting heads with her parents, she was also having relationship problems with her boyfriend and worrying about her future career. 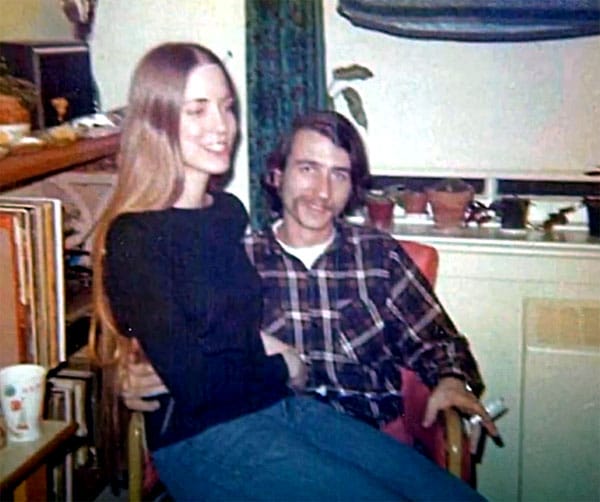 Roberta Parks and her boyfriend Christy McPhee during happier times. According to police reports, her parents did not approve of their relationship.

At the time when she went missing, Roberta’s boyfriend Christy was working as a scuba diving instructor in Louisiana. In the months leading up to her disappearance, the couple were at odds with each other over the direction that their relationship was heading in.

According to her friends, Christy was pushing for marriage. However, Roberta wasn’t ready for such a huge commitment and was planning on breaking things off.

On the day that she vanished, things got even worse for the young university student.

That day, she received news from her sister in California that their father Charles had suffered a heart attack.

This plagued Roberta with guilt, as two days beforehand, she had argued with her father over the phone.

Later that day, she received a second call from her sister. This time, the news was much more positive. According to doctors, it was likely that their father would survive.

Although this second call undoubtedly raised Roberta’s mood, it is likely that she still felt emotionally exhausted and off-kilter.

The details about Roberta’s abduction are scant and somewhat speculative.

However, there are two things that we do know for sure.

While she was en route to the Memorial Union building, Roberta stopped to talk to her friend Lorraine. After the pair had a quick conversation about an upcoming Spanish test, Roberta told Lorraine that was going to get a hot fudge sundae.

This is the last time that anyone reported seeing her alive. A Google Street View image of Sackett Hall from November, 2020. Although her official name was Roberta Kathleen Parks, her family and friends called her Kathy.

Later on that night, Lorraine noticed that Roberta had still not returned to her dorm at Sackett Hall. She found this odd because Roberta was a pretty responsible student. Furthermore, everyone had to be back at their dorms by 2AM unless they had a prior agreement with their Resident Advisor.

Although Lorraine believed that Roberta’s absence was strange, the possibility that something bad or sinister had happened to her was not at the forefront of her mind.

Unfortunately, the following morning, things started to become much more serious when it emerged that Roberta had still not returned.

Initially, her roommates were hesitant to report her disappearance in case it landed her in hot water. At the time, they believed that she might be offsite and in need of some head space.

However, worry soon got the better of them. Although Seattle was 250 miles away, they were well aware that young women were going missing in the nearby state of Washington.

Consequently, they decided to contact their Residents Advisor and raise the alarm. The route that Kathy took that night. The distance between Sackett Hall and Memorial Union is roughly 0.2 miles / 350 yards.

During his conversations with author Stephen Michaud in prison, Ted Bundy spoke about many of his crimes in third-person.

He did this in order to avoid incriminating himself.

It also allowed him to speak about his crimes without directly admitting to them.

Because Bundy put these “pseudo-confessions” forward as theories about what the killer might have done, we cannot say for certain whether or not they are accurate depictions of his crimes.

For example, he may have altered parts of the story in order to make himself seem more intelligent and cunning.

The main issue here is that Ted Bundy was an egotistical psychopath and a habitual liar who liked to try to convince others of his “brilliance”.

Therefore, we need to be extremely careful about taking anything he said as gospel.

Bundy’s “recollection” of the Parks abduction.

If we do take Bundy’s third-person “theories” as fact, then it means that he saw Roberta sitting alone in the cafeteria and decided to sit down beside her.

According to Bundy, she was lonely and depressed.

After some casual conversation, he convinced Roberta to accompany him into Corvallis for some food and drinks.

In Bundy’s opinion, there were two possible reasons why she accepted his invitation.

Once they were in the car, Bundy lied and said that he needed to collect his thesis from a nearby typist. At that stage, he drove out to a secluded area where he could attack her.

There are two lingering doubts about Bundy’s story.

One of Roberta’s friends stated that she was very quick to reject advances from other men. Although she was going through relationship issues at the time, there is no indication that she would have willingly left the campus with a stranger.

Furthermore, when she met her friend Lorraine outside of Memorial Union building, it was nearly 11pm and closing time was fast approaching. If this was the case, one has to wonder if there was even enough time for Bundy to approach Roberta, strike up a conversation and then coax her into leaving with him.

Sadly, it seems as though Roberta’s mental health problems may have clouded the investigation and led authorities to suspect that she had run away or committed suicide. 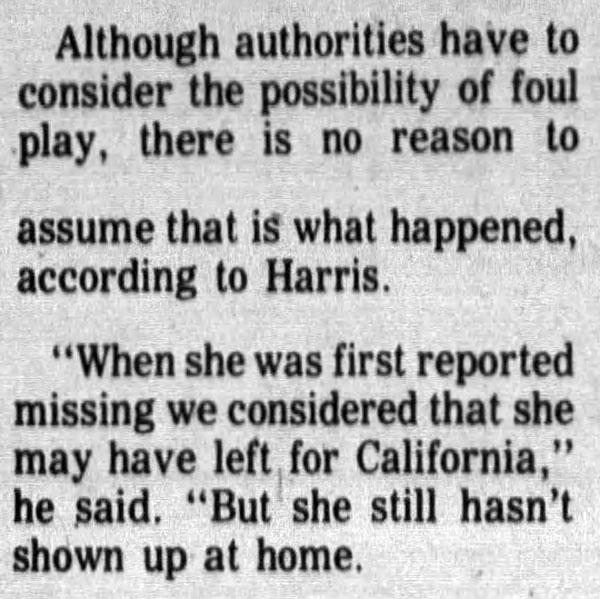 Initially, chief investigator for OSU campus security Bill Harris believed that the missing woman may have left for California. However, the weeks soon passed by and there was still no sign of the college freshman.

According to health professionals, Roberta had a lot of issues at the time.

Psychiatric social worker Georgine Thompson said that 20-year-old was unpredictable and hesitant to engage with therapy. She also stated her belief that Kathy was ‘capable of running off’ and that she may have been having suicidal tendencies.

Other doctors who treated Roberta also echoed similar sentiments. One even recalled how she had talked about “getting away” at one point.

All in all, it seems as though the young college student was in a pretty dark place. 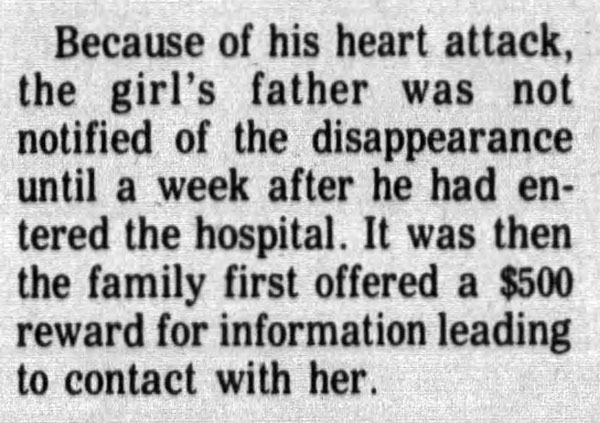 The family did not tell Charles about her disappearance until a week later.

If Bundy was telling the truth about the murder of Roberta Parks, then it means that he callously attacked and murdered a vulnerable young woman who had confided her problems in him just moments beforehand.

He then drove for five hours and dumped her body on the side of a remote mountain, hundreds of miles away from her family.