The slang word Bussin’ means that something is extremely great.

In most cases, you will find that people specifically use the word to describe food that is delicious.

In other words, “bussin'” is basically Gen Z’s way of calling something “tasty”.

“What did you put in this pasta? This is bussin!”

In plain English, this means “What did you put in this pasta? It’s delicious!”

Here is a real-world example:

In the TikTok comment above, this person is basically saying that they know the food is tasty just by looking at it.

It doesn’t HAVE to be about food.

Although most people will use the phrase bussin’ to describe food, you will sometimes come across others using the word to describe things such as movies or the weather.

This is because, technically speaking, the word means that something is “extremely great”.

In other words, it is so great that it deserves its own word.

A Twitter screenshot of rapper Tay Money referring to the weather as “bussin”.

In the case above, you can see that Tay Money is basically saying that the weather is great.

It is worth pointing out that rapper Tay Money helped to popularize the word and push it into the mainstream. In March of 2020, she released the song “Bussin (Whole Brand New)”. Currently, the music video for the song has nearly 12 million views on Youtube.

Despite the success of Tay Money’s song, the phrase did not skyrocket in popularity until nearly 12 months later.

When did the word bussin’ become extremely popular?

The word bussin’ started to increase in popularity in February, 2021.

Google Trends show that search interest for the word increased dramatically during this period. 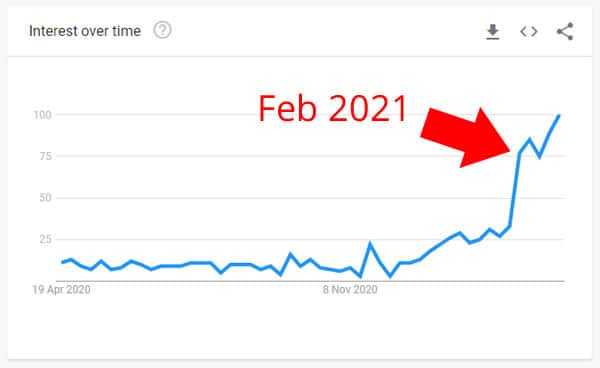 A Google Trends chart showing the popularity of the word.

A viral video by TikTok user chinaglivens also helped to “blow” the word up even further. In her video, which has racked up a whopping 24 million views, China stated the following:

“Hot sauce and chicken? Oh my God, it is so good. It’s gonna be bussin’ bussin’!”

Afterwards, her TikTok went viral, resulting in a number of parody videos. People also began to mimic her video on Twitter and TikTok by repeating the word over and over again.

Some people confuse the word bussin’ with busting. However, these two slang words can have different meanings.

Bussin’ means that something is great. Or more specifically, that a piece of food is delicious.

On the other hand, the word “busting” has a number of different meanings depending on the context. One of which is a bit risqué.

Although the two words are related, it is better to use “bussin'” if you want to be more specific.

The latest TikTok trend involves getting your parents or grandparents to use Gen Z slang phrases.

For example, in one video, a TikTok user asked his grandfather if he enjoyed his dinner. His grandfather responded by saying that “that sh*t was bussin’, no cap!”

The video then pans over to his grandmother, who points at her arm and shouts “sheeeesh!”

As you can see, we have reached the pinnacle of comedy.