Despite a widespread search of the inn and the surrounding area, the police were unable to find any trace of the missing 23-year-old.

Caryn Eileen Campbell was a registered nurse from Dearborn, Michigan. At the time of her murder, she was on vacation in Colorado.

The discovery of Caryn Campbell’s body.

Five weeks after Caryn went missing, a local worker discovered a body less than three miles away from the Wildwood Inn.

At around 9 a.m. on February 17th, Louise Oliver was driving along Owl Creek Road when she noticed that a number of birds were hovering around an area on a nearby snow bank.

Upon realizing that something was attracting their attention, she decided to investigate.

After trudging roughly eight yards through the snow, the worker recoiled in horror.

Before her lay the naked body of Caryn Campbell.

Her frozen remains had been lying there for nearly 40 days. 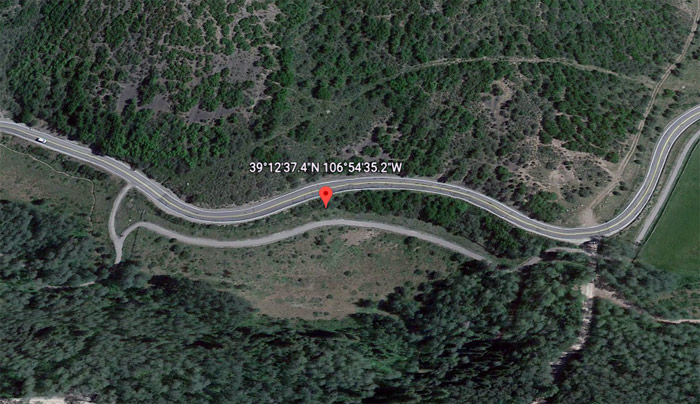 An aerial map showing the exact location where a worker discovered Caryn’s body. The latitude and longitude coordinates are 39.21038, -106.90979.

Following the discovery of Caryn’s remains, it took more than 24 hours for her body to thaw out.

In the meantime, the pathologist had to use dental records to positively identify her. 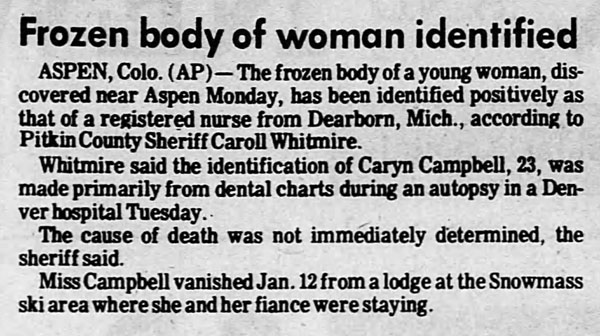 An article from the Battle Creek Enquirer.

According to the coroner’s report, her skull sustained multiple heavy fractures. Her assailant had also slit her left ear lobe with a sharp instrument.

By all accounts, this was a brutal assault.

After examining the contents of Caryn’s stomach, authorities were able to determine that her murder took place shortly after she went missing.

Due to decomposition and animal destruction, it was physically impossible to determine whether or not her attacker had raped her.

However, because her clothes were missing, detectives were pretty confident that they were dealing with a sex crime. They were also mindful of the fact that women had been disappearing in the nearby states of Utah and Washington.

In Ann Rule’s book “The Stranger Beside Me”, she claims that Caryn’s hyoid bone was broken. This is an injury which would suggest she was strangled. However, according to the coroner’s report, the victim’s tongue, larynx and hyoid bone were actually missing due to animal destruction.

At the time, Caryn and her fiancé, Dr. Raymond Gadowski, were on a trip to Colorado with his son and daughter. Although Raymond was nine years older than her, the couple were madly in love. Caryn also had a great relationship with his children.

This vacation was a mixture of business and pleasure.

During the trip, Gadowski was planning on attending a cardiology conference in Aspen. While he was attending seminars, Caryn took the kids sightseeing.

That evening, Caryn, Raymond and the kids were relaxing in the lounge of the Wildwood Inn when she decided to go up to their room and get a magazine. 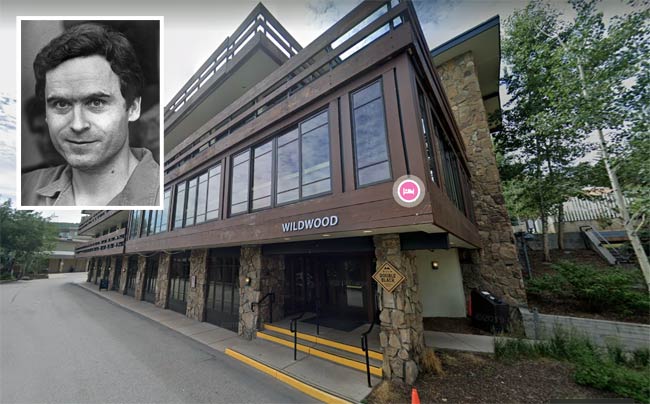 A recent Google Street View image of the Wildwood Inn in Snowmass Village, Colorado. At the time, it had 140 rooms. The hotel’s address is 40 Elbert Lane.

When Caryn exited the lift on the second floor, she saw a group of doctors who she recognized from the cardiology seminar. After saying hello and making polite conversation with them, she continued down the walkway towards her room.

This was the last time anyone saw Caryn Campbell.

After this exchange, she simply vanished.

It was as though the hotel had opened up and swallowed her whole.

Her fiancé realizes that something is wrong.

As time continued to pass by, her fiancé Raymond started to wonder why she was taking so long.

Soon after, his puzzlement turned into anxiety and he began to worry that she had fallen and hurt herself.

As a result, he decided to go upstairs and check on her.

However, when he knocked on the door, Caryn didn’t answer. When Raymond retrieved a spare key from reception and entered the room, there was no sign of his fiancée.

Furthermore, the magazine she went looking for was still in the room and there were no signs that anything sinister had taken place.

The responding officers assured Raymond that she would probably show up later on, after all of the bars had closed.

Raymond disagreed with their assessment. He knew that her disappearance was extremely out of character.

At the time, she was suffering from the flu. She had also turned down the chance to drink cocktails while they were having dinner with friends.

The idea that she had run off to a bar or some party without telling him just didn’t make any sense.

That night, the responding officers called Caryn’s description out over the radio and patrol cars kept an eye out for the missing woman.

The next morning, Caryn had still not returned. As a result, the police stepped it up a gear and decided to take a far more active approach. Throughout the day, officers questioned the hotel’s guests and searched each room.

However, this search turned out to be fruitless. Despite carrying out more than 100 interviews and probing every nook and cranny they could find, the police were unable to find any trace of Caryn Campbell.

Ted Bundy confessed to her murder.

Before his execution in 1989, Ted Bundy confessed to the murder of Caryn Campbell.

Although we do not know the exact details of the crime itself, we do know that Bundy admitted to ‘doing his thing’ that night.

The evidence also backs up his admission.

On the day that Caryn went missing, credit card receipts show that Bundy purchased gas in the nearby town of Glenwood Springs, which is just 40 miles away from Aspen.

Furthermore, when the FBI analyzed his Volkswagen Beetle, they discovered hairs that were microscopically similar to the hairs on Caryn’s head. 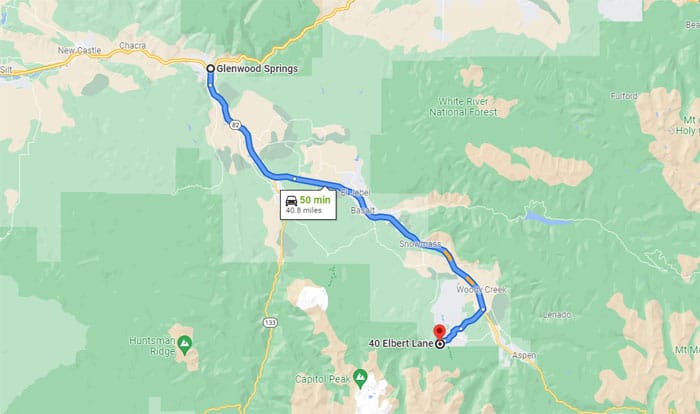 The distance between the hotel and Glenwood Springs is only 40 miles.

It is likely that Bundy asked Caryn to help him carry something to his car.

Bundy had a number of different ruses.

Because the magazine was untouched, it is unlikely that Caryn made it to her destination. That or she wasn’t in the room long enough to pick it up.

Either way, it seems as though she was “intercepted” somewhere between the elevator on the second floor and the door to her room.

Like most of his previous crimes, Bundy was drunk at the time and trolling around for a suitable victim.

According to an 1989 article in the Aspen Times, Bundy confessed that Caryn wasn’t his first target.

Although this particular piece by reporter Dave Price does have some doubts and questions hanging over it, the story it puts forward is just as plausible as any theory about the case.

The article states that Bundy was hobbling along the side of the pool on fake crutches and pretending to struggle with a pair of ski boots that he was carrying.

However, in this case, his first choice target completely ignored him.

She did not reach out and offer him any help. A decision that almost certainly saved her life.

After a couple of minutes passed by, Caryn spotted Bundy from the balcony on the second floor.

From her perspective, a grown man with crutches was struggling out in the cold.

Feeling pity for him, she decided to call out to Bundy and ask him if he needed any assistance. 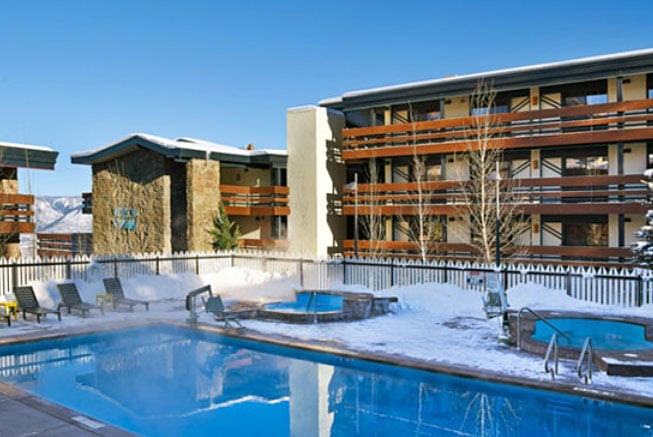 A recent photograph of the pool area at the Wildwood Inn.

The abduction of Caryn Campbell.

At that stage, Caryn took the elevator down to the first floor and walked out to the pool area.

Once she arrived, Bundy asked her if she could help him carry his ski boots to his car.

Although some hesitancy may have crept into Caryn’s mind about accompanying a complete stranger out into the car park, she was in a very awkward position.

She had already offered this man help and journeyed down from the second floor. As a result, she may have found it too difficult to back out and say no.

As soon as they reached his car, Bundy acted quickly. According to his confession, he struck her over the head with his ski boots and then pushed her into the vehicle.

At the time, it was late in the evening and the car park was completely dark.

Judging by his previous abductions, it is also likely that he parked his Volkswagen Beetle in a strategic spot, as far out of the way as possible.

According to the coroner’s autopsy report, there was a slit on Caryn’s left ear. It is possible that this slit was caused by a piece of metal on one of his boots.

Once Bundy had incapacitated Caryn, he drove away from the hotel.

He then searched for a remote spot where he could carry out the crime without the fear of being interrupted.

The crime itself probably occurred inside his Volkswagen Beetle. This is because it was extremely cold that night.

Then, once the “deed” was done, he stopped on Owl Creek Road and dumped her body in a field.

Although Bundy often buried his victims or left them in remote areas, this was not practical in this case because of the snow. This also explains why he dumped Caryn’s body so close to the road.

In other words, the weather was so cold that it acted as a deterrent.

There were also a lot of police patrols that night. This may have convinced Ted that he needed to dispose of the evidence as soon as possible.

Sadly, it seems as though Caryn made the fatal mistake of pitying Ted Bundy. In the blink of an eye, the young nurse went from enjoying a vacation with her future husband to lying dead in a snow field.

This was a young woman who had her entire life ahead of her. Unfortunately, because of one chance encounter, all of her hopes and aspirations were snuffed out by a monster.

“You never really forgive someone for something like that. You just try to put it behind you. It’s not important to me now. The thing I’d like to have back, I can’t have.”

– Caryn’s father Robert Campbell at the time of Bundy’s execution.