Serial killer Ted Bundy used alcohol to lower his inhibitions and build up the courage to commit his murders.

Judging by a number of reports, it is clear that he was dependent on alcohol to some degree or another.

In other words, Bundy was a functional alcoholic. He was a person who could drink on most days and still appear relatively normal. 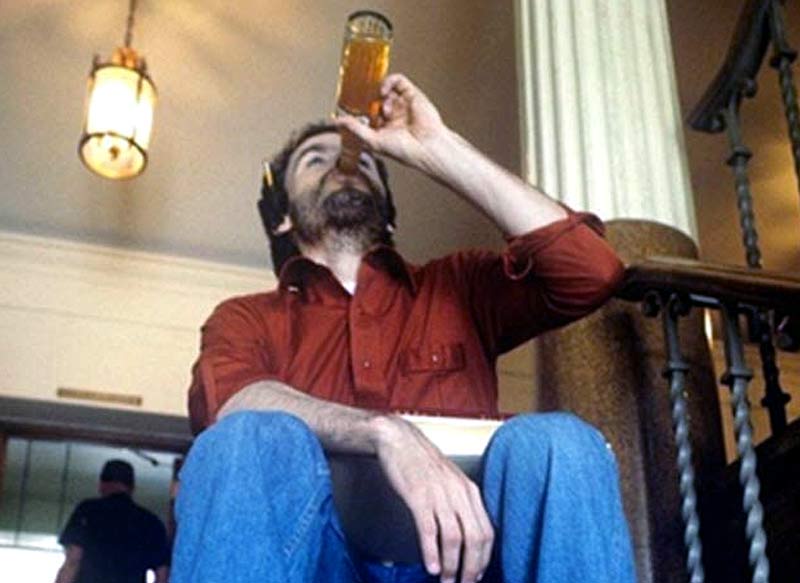 A photograph of Bundy drinking a beer on the steps of the courthouse in Aspen, Colorado. This was before his infamous escape in 1977.

How do we know that Bundy was a functional alcoholic?

According to his ex-girlfriend, Elizabeth Kendall, the couple spent a lot of their time drinking together. At the time, she was battling an alcohol addiction herself.

There are also claims that Bundy’s fiance, Carole Boone, secretly supplied him with booze during his defense trial in 1980.

When Bundy attempted to abduct Carol DaRonch at a Utah mall in November of 1974, she noticed a smell of alcohol on his breath.

While Bundy was making his “confessions” to author Stephen Michaud in prison, he pointed out that most strangers were unable to detect that he was under the influence. This is because he was not blind drunk. Furthermore, they did not know him. As a result, they did not realize that he was acting differently than he normally would.

On more than one occasion, Bundy admitted to drinking and driving.

He was so inebriated during the kidnapping of Georgann Hawkins that he didn’t notice her earrings and shoe had fallen off. The day after the murder, he revisited Hawkins’ body and realized that her shoe was missing. Consequently, he had to return to the parking lot where he abducted her and look for it.

He was so heavily under the influence during the murder of Nancy Wilcox that he spent a considerable amount of time driving around the area looking for her body.

He lost his job as the custodian of Bailiff Hall in Utah because he missed work and turned up drunk on one occasion.

During one interview with journalist Hugh Aynesworth, Bundy expressed a sense of relief that he was in prison and not heading towards a “miserable existence” of politics, law, marital discord, mortgages and alcohol.

In another interview, he spoke about his habit of shoplifting:

“The big payoff for me was actually possessing whatever it was I had stolen. It wasn’t the act, necessarily. Often, I would have to get intoxicated to get loose enough to be able to do it right.”

During the summer of 1975, Bundy started dating a single mother called Leslie Knudson. According to Knudson, she felt concerned when Ted started to drink more heavily as the summer progressed. On one occasion, she discovered him passed out on her living room floor.

As you can see, it is pretty obvious that Ted Bundy had an extremely unhealthy relationship with drinking.

Did alcohol cause Bundy to kill?

His urges and the fantasies that fueled them were always there. They did not just suddenly appear whenever he put a bottle of malt up to his lips.

According to Bundy, alcohol lowered his inhibitions and gave him the courage to commit his crimes. Essentially, drinking increased his desire to engage in anti-social behaviors such as voyeurism.

However, those urges were always inside of him. Even if he was a teetotaler, it is likely that he would have acted on his fantasies at some point or another.

Bundy was a sociopath who did not feel guilt or remorse. The only thing stopping him from committing his crimes in the beginning was a lack of courage.

Alcohol was the “tool” that helped him overcome this obstacle.

The vast majority of alcoholics do not get the urge to peer in through people’s windows or violently attack women. This is because they do not fantasize about such things.

In other words, it is not a part of them.

However, it was a part of Ted Bundy.

This explains why many of his attacks were so bold and daring.

Many of Bundy’s attacks were extremely bold and risky.

As you can see, these were all incredibly risky acts on his part.

Bundy’s crimes were so reckless and unhinged that it is difficult to overlook the huge impact that alcohol probably had on his decision-making.

A lot of movies, documentaries and books fail to mention this side of Ted Bundy.

This is because it conflicts with the sensationalized version of Bundy that sells. Audiences are captivated by the image of a cold and highly-intelligent serial killer who is handsome and sophisticated. People have an interest in his “charm”, his law school education and how well-spoken he was.

Unfortunately for the entertainment industry, the part about Bundy being an alcoholic degenerate who murdered women while he was drunk doesn’t complement the suave image that they have created of him.