Diamond Hands and Paper Hands are popular Internet slang phrases that describe the risk appetite of stock traders. In other words, how likely are they to sell if the price drops or if they make a modest profit?

These phrases are popular on discussion boards such as Stocktwits and Reddit’s WallStreetBets subreddit.

What are Diamond Hands?

A stock trader with diamond hands will hold on until the bitter end. They are undeterred by large swings in the price. If they are holding a call option that is due to expire in two days, they will hold it for longer. Regardless of whether they have already made a huge profit or not.

For example, if the price of Bitcoin drops by 30% in one day, they will not sell. Instead, they will continue to hold in the hope that the price recovers and reaches a new ATH (All Time High).

What do the diamond emoji and hands emoji mean? (💎🙌) 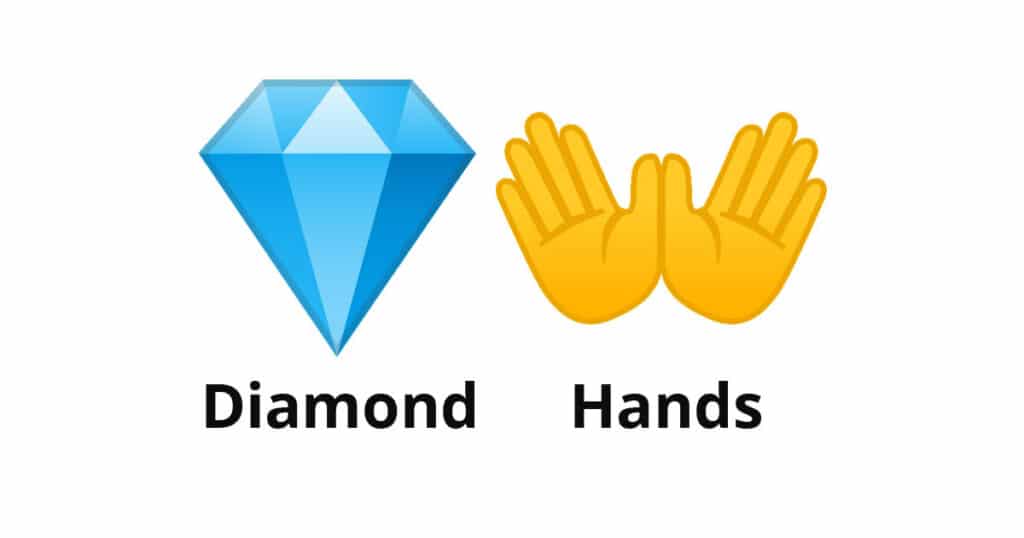 When posted together, the diamond emoji and the hands emoji mean “diamond hands”.

Essentially, people with diamond hands are risk takers. And in some cases, they are gamblers who inevitably end up wiping out a large chunk of their investment account.

For every story of a diamond-handed trader that made it big, there are dozens of stories about people who lost almost everything because of greed.

Although high risk can bring a high reward, it can also leave you with nothing. In this crazy market where stocks only go up, a lot of people seem to have forgotten that the word “risk” means exposure to danger.

If you want to YOLO $1,000, then fair enough. Go all out. Just make sure that you’ll be OK if things go pear-shaped and you lose all of it.

What are Paper Hands?

A stock trader with paper hands will sell at the first sign of trouble. They are also more likely to sell as soon as their investment turns green or breaks even.

This is also known as having “weak hands”.

In other words, a person with paper hands has such a low appetite for risk that they end up losing money and missing out on “gains”.

Johnny Paper Hands buys $1,000 worth of Apple stock. The following day, the market has a “down day” and his shares lose 6% of their value. As a result, Johnny panics and sells, even though Apple is a successful company with strong fundamentals and a bright future. Two days later, the price of Apple stock recovers.

Johnny Paper Hands has basically given $60 away for nothing. All because he panicked and decided to sell.

Someone with paper hands will also sell at the first sign of a measly profit. The problem with this is that they end up missing out on even bigger gains.

Traders will sometimes use this phrase to insult others who are “taking profits” or bailing on a stock that is struggling. The idea here is that people will be less likely to sell if you accuse them of being cowards.

However, each situation is different. Selling a risky penny stock that is falling off a cliff isn’t the same thing as selling your shares in Apple because the price dropped by 5%.

Similarly, locking in gains after a 25% return on your investment isn’t exactly stupid if you feel as though the stock in question has reached your target price and you can see opportunities elsewhere.

Do your own research and make your own decisions.

At the end of the day, it’s your money.

See also: What does “to the moon” mean?