If someone asks “Did he pick you?”, it means that they think the other woman is so desperate for male attention that she is willing to belittle her own gender.

That or she is willing to “side” with the “boys”.

For example, if a woman agrees with a sexist remark about women, then other females might respond to her with “Did he pick you yet sis?”

In other words, they are accusing her of devaluing her own gender for the sake of male approval.

This response is particularly popular on social media apps such as TikTok and Twitter. 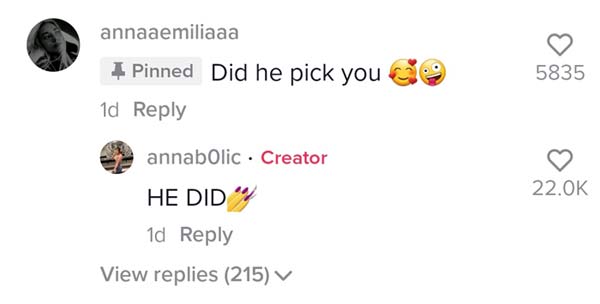 A screenshot from the comment section of a TikTok video. Here, a user asks the uploader “Did he pick you?” She also sarcastically adds the 🥰 emoji. In response, the creator says “He did 💅”.

The example above is from a TikTok video where the creator joked about how women will wear tight clothes at the gym and then complain about guys looking at them.

This video led to dozens of women accusing the creator of being a “pick me girl”.

A screenshot from Twitter, where the reply is also very popular.

In the example above, one woman states that young women are financially draining young men for the sake of achieving an Instagram lifestyle.

In response, another woman quote tweets the statement and asks “did he pick you yet?”

The insinuation here is that the girl is spouting contrarian viewpoints in an effort to receive male attention. In other words, she is trying to say “I’m not like other girls! Look at how different I am?”

Sometimes, the “did he pick you yet?” reply is unwarranted.

In certain cases, you’ll find that the response is unwarranted.

For example, when one woman criticized Taylor Swift for creating too many songs about her ex-boyfriends, fans of the singer lashed out at her and accused her of being a “pick me” girl.

However, in this case, that’s a bit unfair. You and I might not agree with the statement, but there’s nothing particularly “pick me” about it. It’s just a statement about someone’s music content.