In this guide, we will tackle some of the most common myths about serial killers.

Many of these myths have been perpetuated over the years for the sake of entertainment.

In a lot of documentaries, you will find that the facts are sensationalized, details are left out, and the serial killer is transformed into a dramatized version of themselves. 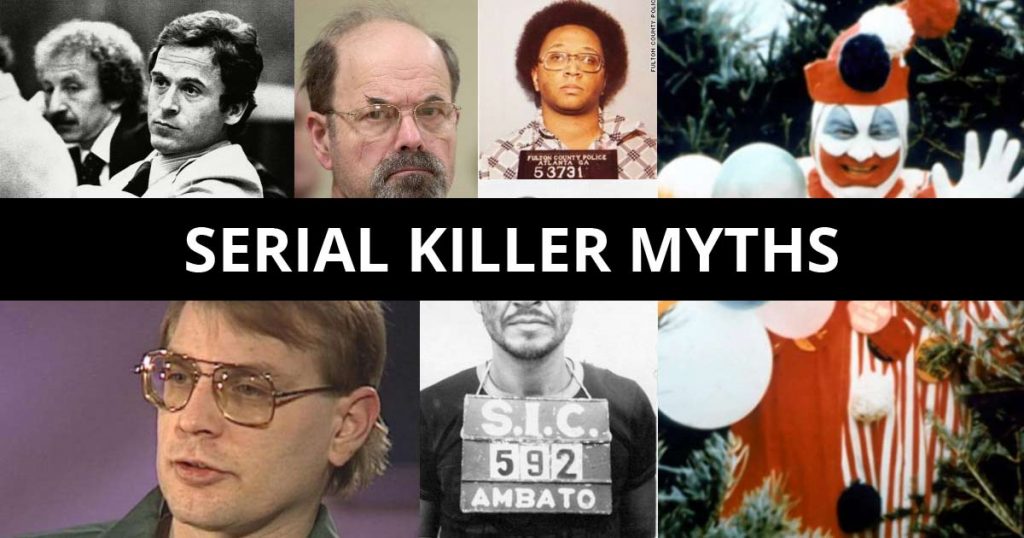 The most common myths about serial killers.

Fictional TV shows and biographical movies also perpetuate these myths, honing in on the stereotypes and “half-truths” that are more likely to captivate their audiences.

As a result, people are constantly being fed some sort of alternate reality about the subject.

There is absolutely no evidence to suggest that serial killers are smarter than normal people. Researchers at Radford University in Virginia looked at the IQ scores of 202 serial killers. Using this data, they were able to calculate that the median IQ score of these serial killers was actually 89.

According to Louis B. Schlesinger, who is Professor of Psychology at John Jay College of Criminal Justice, the intelligence of serial killers “copies the normal distribution of the general population”.

In other words, serial killers tend to have a pretty normal IQ.

Take the “Green River Killer” Gary Ridgway, for example. His IQ is somewhere in the low eighties. This actually puts him below average. Despite this, he is still America’s second most prolific serial killer.

This myth has been spread by TV shows and movies because the concept of a “dumb” or “average” serial killer isn’t as exciting to audiences.

Another issue is that documentaries about these killers are prone to sensationalism. Many of them are “sexed up”, so to speak.

For example, Ted Bundy’s intelligence is often overblown for the sake of drama. In reality, he was a bit “bright” at most. He was not an evil genius who could trick any woman that he wanted to.

All in all, there is no reason to believe that serial killers are more intelligent than the average person.

However, despite the evidence, this still remains one of the most common myths about serial killers today.

Myth #2 – All serial killers are white.

This is another myth about serial killers that has been popularized by the media. In a previous article, we wrote about the existence of black serial killers.

In that article, we pointed out that there have been plenty of cases of African American serial killers. However, their cases have not received the same amount of publicity as the likes of Dahmer, Bundy or BTK.

For example, Samuel Little is the most prolific serial killer that America has ever had. Authorities currently believe that he is behind the murders of at least 50 women across the USA.

In terms of Asian serial killers, there are the likes of Wang Qiang, who murdered 45+ people in China. Another example is Kiyotaka Katsuta, who was convicted of 8 murders in Japan.

There have also been a number of Hispanic serial killers, such as Fernando Hernández Leyva. Levya is currently serving time in “La Palma” prison in Mexico for the murders of 33 people.

Last but not least, there is Pedro López. López is a Colombian serial killer who became known as the “Monster of the Andes”. He received this nickname because he murdered 110 young girls in Colombia and Ecuador during the 1970s.

As you can see, race does not matter. Serial killers span all racial groups. The idea that someone has to be Caucasian in order to carry out these crimes is a misconception. It has no basis in reality.

Another popular myth is that serial killers cannot stop themselves from killing. However, this isn’t the case.

Although many serial killers do find it difficult to control their urges to kill, it isn’t impossible for them to stop. Especially if they find another way to satisfy their fantasies.

For example, “the BTK killer” Dennis Rader stopped killing in 1991. However, the police did not arrest him until 2005. This means that Rader stopped killing for 14 years. He later told detectives that he had been able to satisfy his fantasies during this period by engaging in various auto-erotic activities.

More recently, authorities finally caught up with “the Golden State Killer” Joseph James DeAngelo. In 2019, he pleaded guilty to 13 counts of murder. DeAngelo’s last known murder was back in 1986. If we do the math, then this means that he did not murder anyone for nearly 32 years.

Although this can be true for disorganized offenders, it certainly isn’t the case for organized killers.

As you can see, many of these men were able to lead relatively normal lives, despite their crimes. They weren’t loners by any means.

Another misconception is that serial killers are psychotic.

In other words, they hear voices and see things, etc.

Although certain disorganized offenders can match this description, the vast majority of serial killers know exactly what they are doing. They are not delusional. They have not lost touch with reality. In addition, they also know the difference between what is right and what is wrong.

This myth is popular because a lot of people tend to confuse “psychosis” and “psychopathy”. However, these are two very different things.

A lot of serial killers are psychopaths. However, they are usually not psychotic. People who suffer from illnesses such as schizophrenia are more likely to be harmed than to cause harm to others.

Many of these murderers will try to play the “insanity card” after they have been caught. They do this in the hope that they will be found not guilty by reason of insanity.

For example, the “Son of Sam” David Berkowitz, claimed that he had been receiving orders from his neighbor’s dog. However, after the trial, he later recanted this story and admitted to FBI profiler Robert Ressler that he had made it all up.

#6 – America has the most serial killers.

This statement could be true or false. The problem is, we simply do not know for sure.

It is true that the majority of recorded serial killers have been American. However, this may have been down to better investigative methods. For example, it was the FBI that first began to profile serial murderers back in the 1970s. For all we know, similar crimes were going unnoticed or unsolved in other countries. Especially in countries with less resources to spend on policing.

Furthermore, serial killers have existed throughout history. For example, Gilles de Rais was a French army leader who is believed to have murdered up to 140 boys and girls during the 1400s. In October of 1440, de Rais was hanged to death for his crimes.

Relatively speaking, the United States is quite a young country. Therefore, it is not outside the realms of possibility that other countries have had far more serial killers than the USA.

It’s just that their methods of record keeping and law enforcement would not have been adequate by today’s standards.

This myth is completely untrue, as many serial killers will change their M.O. until they feel as though they have “perfected it”. 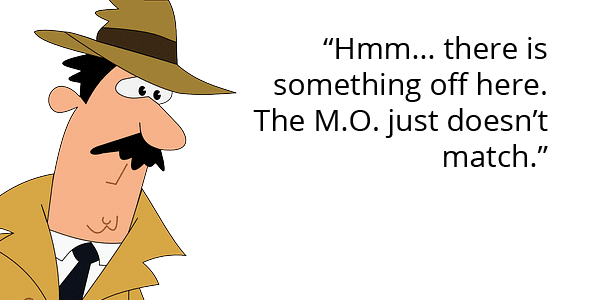 In fictional crime shows, you will sometimes hear detectives talking about how the “M.O. doesn’t match”.

The Modus Operandi is the offender’s method of operating. It is a tool that the killer uses to achieve his goals.

For example, a killer could use a knife during his first murder. However, he might discover that using a knife led to too much blood. As a result, he may decide to strangle his next victim.

Basically, the M.O. can change as long as the offender feels that there is room for “improvement”.

Ted Bundy started off by breaking into women’s homes and murdering them. Later on, he began to lure women to his car so that he could strike them with an object and then kidnap them. Towards the end of his crime spree, he reverted to breaking and entering again.

As you can see, Bundy’s M.O. changed multiple times. This is fairly common, as criminals will often “tweak” their crimes in order to improve them.

And in cases like Bundy’s, their M.O. may also regress and become sloppier. In other words, they become overconfident and lazy. As a result, they begin to take less precautions than before.

Because of this, the link between cases cannot be ignored based on M.O. alone.

The vast majority of serial killers do not want to be caught. Instead, they tend to slip up and make a mistake that leads to their capture.

Serial killers can become overconfident, sloppy and lazy. They can also become more impulsive as time goes on.

The “Co-Ed killer” Ed Kemper spoke of how his “urge” to kill became stronger and stronger. To the point that he began “taking risks”. Risks that went against his “rules of operation” to avoid arrest. In other words, Kemper became more impulsive. As a result, he began to take fewer precautions.

Ted Bundy also spoke about this. During interviews, Bundy likened it to changing a car tire. “The first time, you’re careful. By the thirtieth time, you can’t remember where you left the lug wrench.”

Inevitably, this behavior leads to a slip-up. A slip-up that allows police to hone in on them as a suspect.

Another point worth noting is that many of these criminals believe they are smarter than they really are. This is because psychopaths tend to have an enhanced view of themselves. This egotism can cause them to underestimate the people who are investigating their crimes.

This is why killers will sometimes go out of their way to taunt the police or their victims’ families. Doing so is an unnecessary self-serving action that puts them at a higher risk of being caught.

As we mentioned in “Myth #1” above, most of these criminals are not smarter than the average person. A lot of the notorious killers that you’ve read about only got away with their crimes because law enforcement wasn’t as organized at the time, technology wasn’t as widespread and DNA forensics did not exist.

Read more: Why are there less serial killers today?

Although serial killers often have a particular victim type, they won’t always stick to that type.

If the opportunity presents itself and their urges are strong enough, they may stray from their preference.

For example, Ted Bundy’s type was young college-age women with brown hair. However, he also murdered two 12-year-old girls and a woman with blonde hair.

Having a type and only targeting that type are two different things. As a result, we should never over-rely on things such as hair color, race and age when joining the dots between murders.

There are a lot of myths and stereotypes about serial killers, many of which exist because they have been consistently pushed onto audiences.

For example, documentaries may overemphasize certain “strengths” of the killer while glossing over their mistakes. Biographical films will focus on the most entertaining aspects of the “character”. Entertainment and “news media” websites will write sensationalist clickbait titles about the subject in an effort to make more money from advertising.

As time goes on, the story becomes more and more warped, leaving us with a bunch of nonsense and half-truths.