In other words, you both share a mutual best friend. 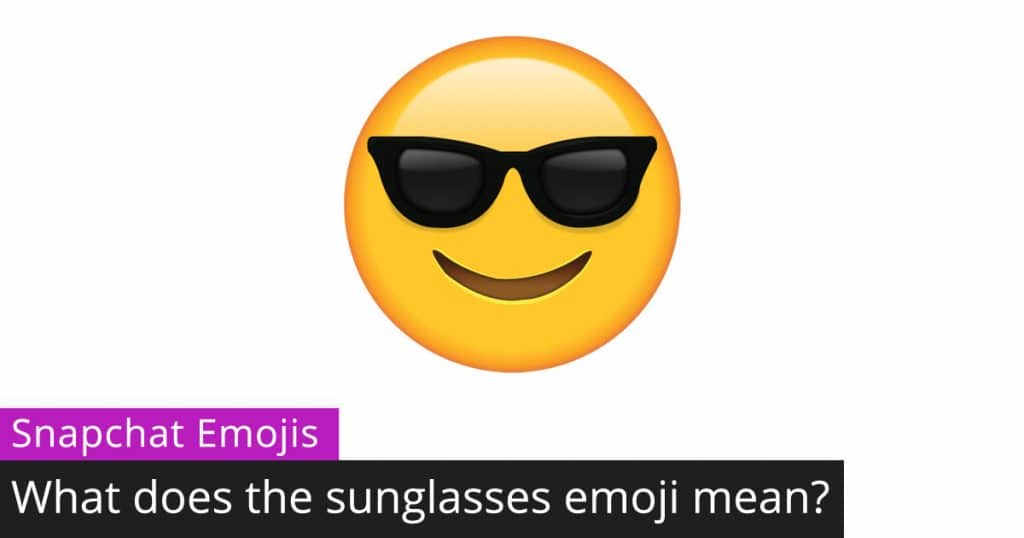 This emoji consists of a “cool” smiley face with black sunglasses on.

Your Best Friends list on Snapchat can hold between one and eight people. Snapchat automatically compiles this list using your recent activity.

In other words, these are the people who you have recently interacted with the most.

If a sunglasses emoji appears beside someone’s name, then it means that both of you have the exact same person in your “Best Friends” list.

As a result, when you look at Olivia’s profile, you will see a sunglasses emoji beside her name.

Why? Because you both share the exact same best friend – Lorna.

In other words, you have both recently sent a lot of snaps to the same person.

The sunglasses emoji VS the grimace emoji.

In a previous guide, we wrote about the grimace emoji.

The grimace emoji and the sunglasses emoji are kind of similar in the sense that they both indicate a mutually shared friendship.

However, the grimace emoji will only appear if you both share the exact same TOP / #1 friend.

On the other hand, the sunglasses emoji doesn’t really care about whether a person is 2nd or 5th on your list.

Take the following scenario, for example.

In this case, you will still see the sunglasses emoji beside Emma’s name. This is because Noah is on both of your “Best Friends” list.

It doesn’t matter if he is 2nd or 6th or even 8th. All that matters is that he is present on both of your lists.

How long does the sunglasses emoji last?

There is no “set” time for how long an emoji will last on Snapchat.

Even the Snapstreak fire emoji and the hourglass emoji can stick around for a while after the streak has ended.

As we mentioned above, many of these friend emojis are based on your most recent activity. Furthermore, the app can take a while to update them or remove them.

Because Snapchat is such a popular app, it is likely that there are one or more caching mechanisms at play. In certain cases, it can take days before the emojis are changed.

Why did the sunglasses emoji disappear?

If the sunglasses emoji disappears, then it means that your “shared best friend” has either fallen out of your “Best Friends” list or the other person’s list.

Remember: All of these emojis are based on recent activity. They can all change within a few hours or a couple of days, depending on how active you and your friends are on the app.

The sunglasses emoji is appearing next to the yellow heart / red heart?

This means that you and your top friend share a mutual best friend. The yellow heart / red heart indicates that you are best friends with this person.

You’re obviously number one on their list because the heart is showing. However, “Person X” could be 4th on their list and 3rd on yours.